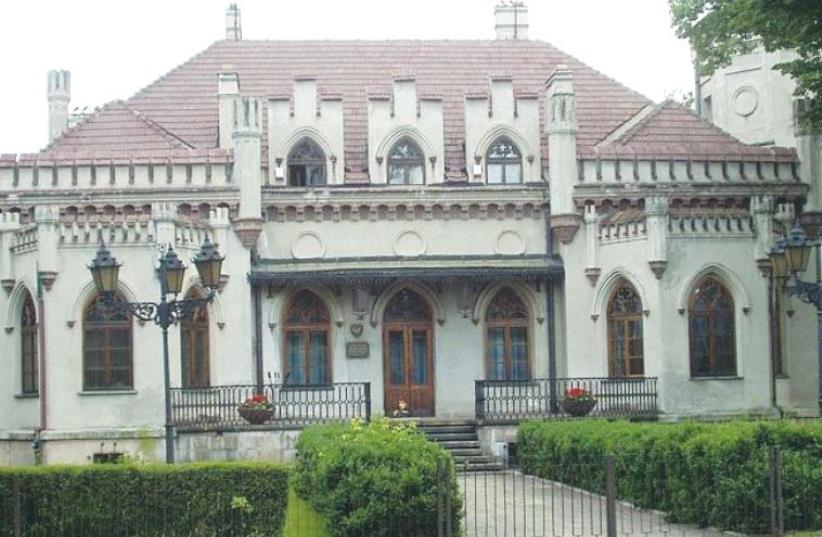 THE GOLDMAN DRILLICH house in Tarnow is now called the Wedding Palace.
(photo credit: Wikimedia Commons)
Advertisement
After winning a court case against a Catholic church in southeastern Poland over stolen property, Ann Drillich, daughter of two Holocaust survivors, has yet to see the results.Australian-Polish doctor Drillich inherited the property in Tarnow (Torna in Yiddish) from her late mother, Blanka Goldman, who survived the Holocaust by hiding in the basement of her own family home. At age 18, she fled the Tarnow Ghetto, after the rest of her family had perished.According to Drillich, the Poetschke family – who rented part of the Goldman house – saved her mother’s life. They hid her away in the basement, while they lived upstairs.After the war, Blanka repossessed and inherited the entire estate. When she left the country in 1948, fleeing anti-Semitism that lingered after the Holocaust, she delegated the power to administer the estate to the Poetschkes. After Blanka’s death, her family inherited the property and continued to entrust its administration to George Poetschke.In 1994, Ann’s father, Henry Drillich, nominated Poetschke for the honor of Righteous Among the Nations, which he received in 1995. Ann notes that her family also expressed their gratitude to the Poetschkes financially.But the relationship turned sour when the Goldman-Drillich family discovered years later that in 1986 George Poetschke had illegally acquired 8,583 square meters of land that had belonged to Blanka Goldman Drillich. He pocketed half of it, and donated the other half to the church. Ann Drillich told The Jerusalem Post that Poetschke was advised by parish lawyers to do so.“It was a betrayal from the man our family trusted implicitly and nominated as a Righteous Gentile,” she said, remarking that her late father had described it as “one of the greatest disappointments of his life.” The Our Lady of the Scapular in Tarnow church now stands on her family’s land.The church legally and technically belongs to Drillich, but she’s never been inside; when she tried, she found it locked.In 2010, Drillich launched a long legal battle over the property stolen from her family following World War II, and that’s how she and her father first learned about the theft by Poetschke.She won the case against the parish in 2013, but in April this year the church appealed, based on a claim of usucapion [gaining ownership by possessing property beyond the lapse of a certain period of time]. The court denied the appeal.“The church was found to have property that wasn’t theirs. You would have thought they would settle after the court reversed the initial illegal acquisition, but they didn’t, they again tried for usucapion,” Drillich remarked. “You wouldn’t think the church would do such a thing – but they did.”She told the Post that since the court’s decision in April, the church has not offered her a penny, after having already refused to negotiate with her following the 2013 court decision.Drillich is therefore suing the church. The church was unavailable for comment.Asked whether she wants the land returned to her, she responded: “No. I want proper settlement, but if the parish refuses that might need to happen. I think a public recognition of wrong would be the right thing to do, though I don’t expect it.”Drillich by no means won the battle for the entire estate, saying that most of it was appropriated.The Goldman Drillich House, now called the Wedding Palace, was reclaimed through usucapion by the Treasury and City of Tarnow, after reversing the decision by which they acquired it in 2013.“The court refused to accept it was impossible for us to lodge a successful claim during the People’s Republic of Poland (communist Poland),” Drillich explained, and included this period in the 30-year span required for usucapion.“This government isn’t doing anything about property restitution,” she stated – and she’s not alone in this opinion.Indeed, on Wednesday, a constitutional court in Poland rejected a motion to scrap a law, which critics say is preventing restitution of some property that used to belong to Jewish families in Warsaw.The Polish Constitutional Tribunal gave its ruling on a review requested by the World Jewish Restitution Organization, which challenged the constitutionality of a law passed last year by the Polish parliament that limits the rights of claimants to restitution for private property in Warsaw.The WJRO said the move highlights the need to resolve Holocaust-era restitution in Poland. “We are very disappointed that the court upheld an unjust law that ends the rights of many claimants to their property in Warsaw,” said Gideon Taylor, WJRO chair of operations.“This decision highlights the need for Poland, at long last, to do what all other countries in the former Soviet bloc have done: establish a national program to provide all Jewish and non-Jewish former owners, and their families, the opportunity to claim restitution or compensation for their property confiscated during the Holocaust or by the communist authorities.As the last survivors get older, now is the time for Poland to act,” he said.“Survivors are running out of time for Poland to meet its obligations to return property,” added Jehuda Evron, president of the Holocaust Restitution Committee, a New York-based group of Polish survivors. “We are losing survivors by the day, and we must do everything we can to ensure they spend the last few years of their life in dignity.”Polish Chief Rabbi Michael Schudrich told the Post that the key issue is ownership. “This is not about Jewish ownership.It’s not about synagogues or cemeteries – for which there is a process – it’s about private ownership by anyone. The decision is disappointing and it has an impact on Jews, but it’s not about Jews,” he said.Familiar with Drillich’s case, Schudrich said that he hopes a wise and fair solution would be reached in a timely manner.While Rabbi Schudrich was hesitant to comment on the Catholic church, Drillich pointed out that Pope Francis visited Krakow last week for a leadership drive. “Will he show leadership on this?” she mused.JTA contributed to this report.