This is the second instance of anti-Semitic activity in the San Antonio area this month. 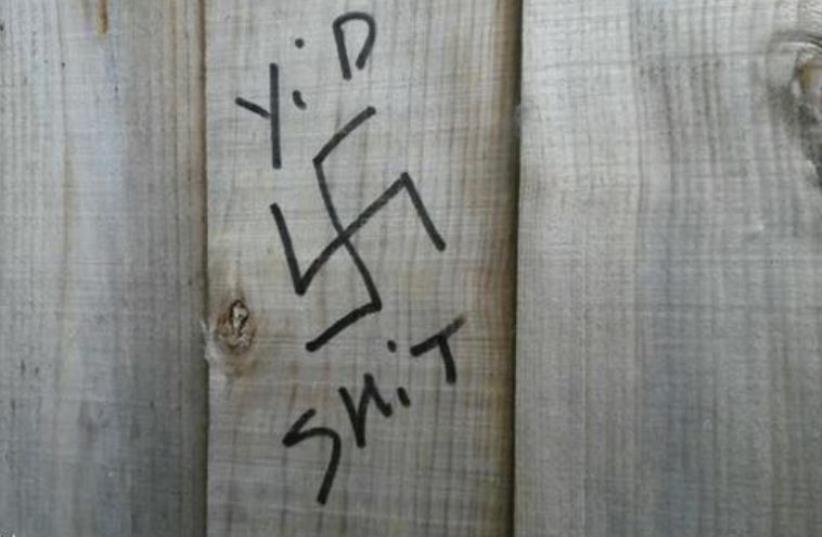 Anti-Semitic graffiti on gate of Jewish school in UK.
(photo credit: SHOMRIM)
Advertisement
A San Antonio synagogue was vandalized with anti-Semitic graffiti less than a week after another city synagogue and its neighborhood were similarly attacked.A maintenance worker at Congregation Agudas Achim, the Texas city’s second-largest synagogue, discovered graffiti on a storage shed near the back of the synagogue’s property on Monday morning, MySanAntonio.com reported.Linda Moad, executive director of the Conservative congregation, said the employee found two grills missing along with the words “Jew Jew” sprayed onto the structure.The previous Wednesday, anti-Semitic graffiti was found spray-painted on Congregation Rodfei Sholom along with some 30 cars and buildings in the neighborhood of the Orthodox synagogue, according to MySanAntonio. The graffiti included swastikas and references to the Ku Klux Klan, and at least one car’s side window was smashed in with a rock.“I was already disgusted by what happened at Rodfei Sholom last week,” Agudas Achim’s Abraham told MySanAntonio.com. “This hits a little closer to home because it’s at my synagogue. I am just saddened that people would stoop to this level to try to break our community.”Texas Gov. Greg Abbott condemned the vandalism in a statement Monday, calling it an “offensive and disturbing attack on people of all faiths.”Also Monday, the San Antonio Police Department, FBI, Crime Stoppers and local elected officials announced an award of $11,500 for information leading to the Rodfei Sholom vandals.“We’re very sad that this would happen so soon after the incident at Rodfei Sholom,” said Judy Lackritz, the community relations director for the Jewish Federation of San Antonio. “We appreciate that law enforcement are taking it seriously in both cases. We are so heartened at the outpouring of support we have received throughout the city from all different religious groups.”Last week, the FBI said it had identified a person of interest who lives near the community, but on Monday, at the event where the reward was announced, police said no arrests have been made and that they are pursuing multiple suspects.Rodfei Sholom’s rabbi, Arnold Scheinberg, said his congregation saw overwhelming attendance on Shabbat.“Our congregation experienced a hate crime, but our community experienced love and support from every facet of our community,” he said, according to MySanAntonio.com.Scheinberg said security at the synagogue has been enhanced but did not provide details.