'Rabbis, get your dummy knives out, the simulation is starting'

European rabbis given self defense course at Berlin conference. 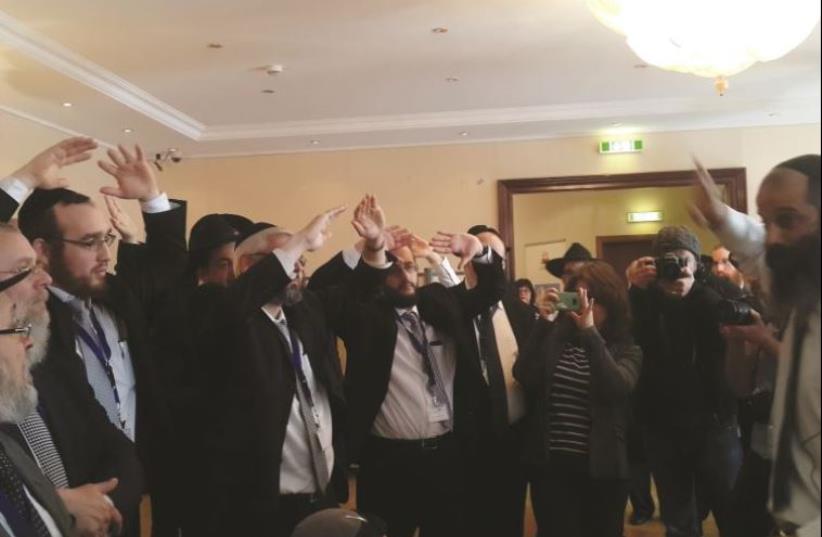 European rabbis learn self-defense in Berlin conference.
(photo credit: DANA SOMBERG)
Advertisement
Rabbi Menachem Margolin, Head of the Center for European Rabbis, opened the Conference of European Rabbis in Berlin in a surprising manner on Wednesday. "Everyone, pick up a dummy knife so that we can simulate assaults," he said. "It is important that the Jewish communities of Europe view their rabbis as examples, that they know how to protect themselves."The library of the Berlin Chabad House was cleared of tables for the event. Instead of studying Torah, 150 rabbis gathered to undergo a course in self-defense. According to them, they simply had no choice."The message we're trying to convey," Margolin explained, "is that we won't cut back on security in the Jewish communities of Europe. But rather, we are expanding it.""You guys aren't used to this sort of activity, but we'll show them that we're not weak," said Lior Inbar, who was leading the workshop. "If someone tries to steal your wallet, give it to them. The point here is to learn how to cope with anti-Semitism."Inbar demonstrated to the rabbis how to neutralize an assaulter. He split up conference participants into pairs - one taking on the role of victim, the other, the attacker. The attackers were armed with  dummy-knifes and instructed to yell racist slurs at their victims like "dirty Jew." According to the rabbis, the simulations were based on real experiences. "We're used to it," said Rabbi Israel Yaacov Lichtenstein of England, "I'm used to having slurs such as 'dirty Jew' being hurled my way as I walk to synagogue on Shabbat. And I'm not talking about a rural town - I'm talking about London. There are whole areas that I advise my community members to avoid entering. It's clear to us. We're used to it and it's sad that we are. It wasn't always like this, we used to be more free. Once we could walk around freely with a Kippa, today we hide it under a hat."The rabbis practiced stabbing-attack scenarios as well as potential kidnappings; They think it is only a matter of time until such scenarios become reality.Rabbi Jacobs,  the Chief Rabbi of Holland, pulled out a black-device from his pocket. "Look," he said, "this is a GPS given to me by the Dutch police so they know where I am. Sounds ridiculous, right? But this is our reality. We're under tight security. I report my whereabouts to the police because there are threats on the Jewish community.""Anti-Semitism is ever-present," concluded Margolin. "It's not that we're learning self-defense in order to start security patrols in our communities - we trust the government establishments of our home countries - but we also need to give our community members a sense of security that has long been lacking."