Rabbi Menachem Hadad tells Israel Radio that Belgium lacks the counterterrorism capabilities of other Western European countries grappling with home-grown jihadism of the kind on display on Tuesday. 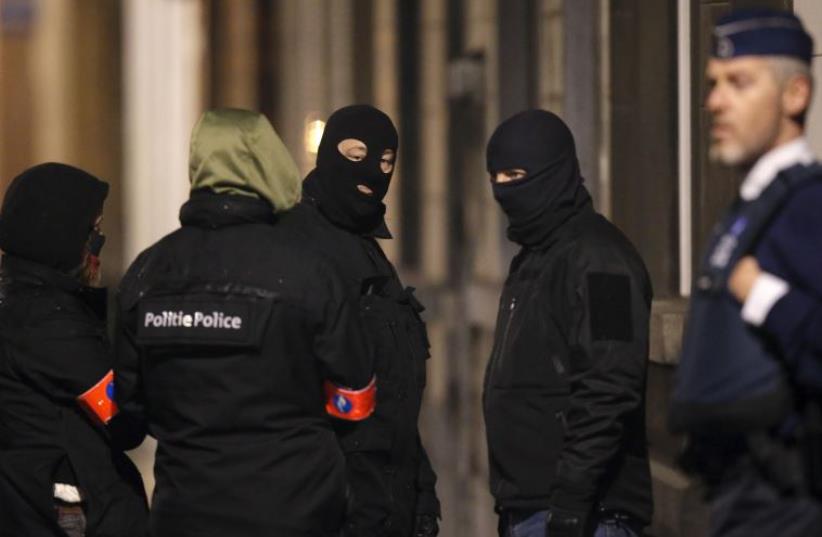 Masked Belgian police secure the entrance to a building in Schaerbeek during police operations following Tuesday's bomb attacks in Brussels, Belgium, March 25, 2016
(photo credit: REUTERS)
Advertisement
BRUSSELS — Amid revelations of perceived failures in Belgium’s handling of terror threats, a prominent rabbi from Brussels said Belgian authorities “have no understanding of security issues.”Rabbi Menachem Hadad of Brussels’ Shomre Hadas haredi Orthodox community made the remarks in an interview Thursday with Israel’s Army Radio about concerns that Belgium lacks the counterterrorism capabilities of other Western European countries grappling with home-grown jihadism of the kind on display on Tuesday, when a series of explosions in Brussels killed 32 people.Hadad said that soldiers who were posted outside a synagogue and the city’s Chabad House following the slaying of four Jews in Brussels’ Jewish Museum of Belgium in 2014 told him that for months, they used to guard the area with no bullets in their rifles. “It was just a show. It’s not normal,” he said.Hadad’s rebuke follows reports of omissions in how Belgian authorities handled security issues, including a failure to follow up on warnings by Turkey about one of the perpetrators of Tuesday’s attacks.Belgium’s interior and justice ministers on Thursday offered to resign.Belgium’s counterterrorism abilities are limited by a constitutional ban on ethnic profiling and other laws, including a ban on home searches between 11 p.m. and 5 a.m.Following the attacks, Israel’s intelligence minister, Israel Katz, said at the Knesset that, “If Belgians continue eating chocolate and enjoying life and looking like great democrats and liberals, and not noticing that some of the Muslims there are planning terrorism, they won’t be able to fight them.”  His remark was widely criticized as undiplomatic and insensitive in Belgian media.