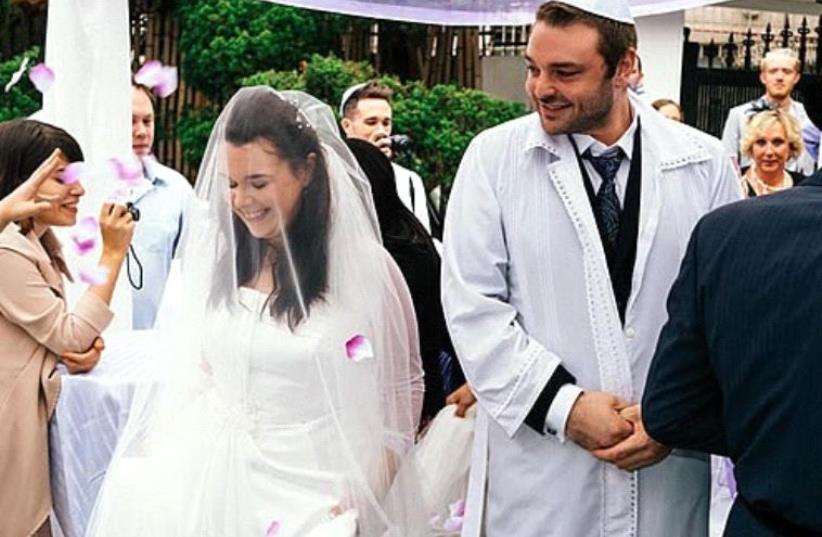 The nuptials of Rachel and Jeff Czerniak, conducted by a Chabad rabbi in Seoul, Korea
(photo credit: CHABAD.ORG/ZAK MILOFSKY)
Advertisement
The halves of two souls were recently joined in marital union in Seoul, as the first traditional Jewish wedding was performed in the South Korean capital. According to Chabad.org on Tuesday, the director of the hasidic movement's Jewish community in Korea, Rabbi Osher Litzman, conducted what is thought to be the East Asian nation's first marriage ceremony held in Orthodox Jewish tradition. While South Korea's Jewish population consists of several hundred people, the nuptials of Dublin natives Rachel and Jeff Czerniak were the first the rabbi has performed since his arrival to the country in 2008.The newlyweds, who have known each other since high school, work as English teachers in Seoul and opted to stay local for their wedding due to their job schedules. “It’s very hard for us to leave Korea, even for a few days,” Rachel told Chabad.org ahead of the ceremony. “Korean children work very hard to succeed academically, and school is open almost year-round. We planned our wedding to coincide with a three-day public holiday, so we could each take a full week off work.”As the Korean city lacks commercial kosher catering services, Rabbi Litzman's wife Mussy prepared food for the celebration.As for entertainment, the couple's guests danced to music provided by members of the local Jewish community.