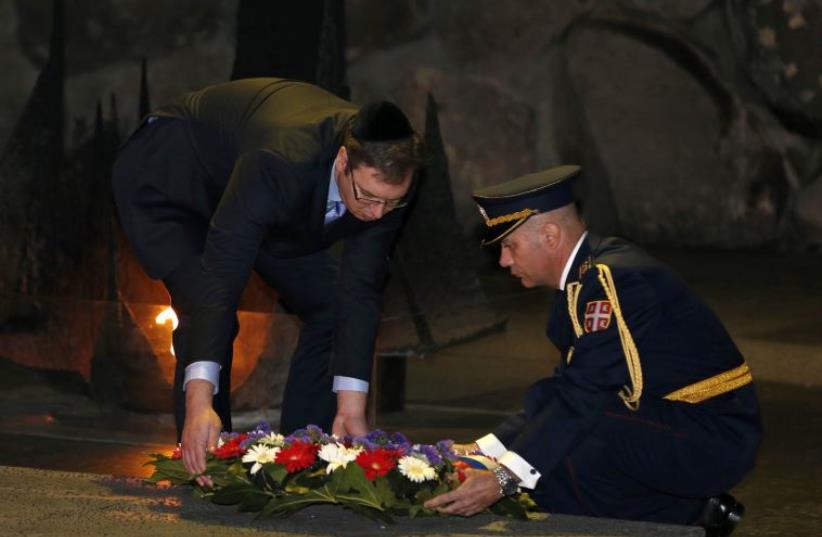 Serbia's Prime Minister Aleksandar Vucic (L) lays a wreath during a ceremony in the Hall of Remembrance at Yad Vashem Holocaust memorial in Jerusalem December 1, 2014.
(photo credit: AMMAR AWAD / REUTERS)
Advertisement
Serbia last week began the official rehabilitation of its controversial prime minister Milan Nedic, who ruled the country’s puppet government during the Nazi occupation and has been accused of collaborating in the destruction of the local Jewish population.When the former general staff officer was appointed to lead the Germans’ puppet government, he stated that he accepted the position to safeguard “the core of the Serbian people,” saying the Germans had promised that resistance would bring harsh reprisals against civilians.During his tenure, which lasted from August 1941 until late 1944, however, more than 90 percent of Serbia’s Jewish population was exterminated.Despite Serbian courts having shot down two prior efforts to push through a rehabilitation, an appeals court in Belgrade in July ordered the process to go ahead.Both Nedic’s family and the Association of Political Prisoners and Victims of the Communist Regime were reported to have asserted that not only was he not a war criminal as he was branded by the communists after the war, but that he had, in fact, been a victim of political persecution.“They are basically saying that he was a victim,” Dr. Efraim Zuroff, a historian and Nazi hunter with the Simon Wiesenthal Center told The Jerusalem Post.According to a report by the Balkan Insight website, his great grandson argued that he accepted large numbers of Serbian refugees from across the Balkans and that rather than committing suicide in a Yugoslav jail, he was murdered “for political and ideological reasons.”In an op-ed published in the Serbian newspaper Danas on Tuesday, Zuroff wrote that he was not surprised by the move, which he categorized as part and parcel of revisionist efforts throughout the former Soviet Union and in the Baltics and Hungary.“Attempts to whitewash the roles of those who actively facilitated and/or participated in the annihilation of the Jews is particularly outrageous and should be opposed by all available legal means,” he wrote.“If Nedic had any illusions that he could influence German policy regarding Serbia and Serbian Jewry, he should have realized long before his Quisling government was disbanded that he was virtually powerless and was merely a puppet of the Nazis and completely at their mercy,” he added, noting that during the period of his rule, some 300,000 Serbs were murdered, in addition to nearly 1,600 Jews, a significant number of whom were killed on the outskirts of Belgrade.“Nedic’s role as prime minister of a Quisling regime which served the interests of the Third Reich is sufficient reason to deny him rehabilitation.His failure to save Serbs and Jews is clear proof that for whatever reason, he made a terrible mistake by agreeing to head a puppet administration that failed the citizens of Serbia.He clearly does not deserve rehabilitation, and any such step will be a grave insult to the Nazis’ victims in Serbia, as well to the memory of those who bravely fought against the Nazi regime and sacrificed their lives to free their country from the yoke of the Third Reich, the most genocidal regime in human history,” Zuroff continued.Speaking to the Post, Zuroff noted that at the same time as Serbia is beginning the process of revising its history, Serbia is considering a bill to offer Holocaust restitution and funding to the local Jewish community.According to State Secretary Gordana Stameni, the proposed act would allow for the government to provide funding of as much as €950,000 to the Jewish community for the next quarter century.“The draft law provides for the restoration of confiscated property to victims of the Holocaust who have no living heirs,” according to Stameni.