It’s “absurd” for the center to “attack the most supportive leader the Jewish people and the state of Israel have ever had,” Yossi Dagan says in defense of Trump.

Donald Trump speaks during a joint press conference with Minister Benjamin Netanyahu in the East Room of the White House in Washington , DC on Feb. 15, 2017 with an Israeli flag in the background
(photo credit: SAUL LOEB / AFP)
Advertisement
Samaria Regional Council head Yossi Dagan attacked the Anne Frank Center for Mutual Respect, after it criticized US President Donald Trump for failing to take a strong stand on antisemitism.Trump “has proven time and again his commitment to the Jewish people and the State of Israel,” Dagan said. It’s “absurd” for the center to “attack the most supportive leader the Jewish people and the State of Israel have ever had,” he continued.He spoke out after the New York based human rights organization sharply criticized Trump for his delayed response to antisemitic attacks that have occurred in the United States since he took office on January 20.
Trump says antisemitism is "horrible" and has to stop (credit: REUTERS) 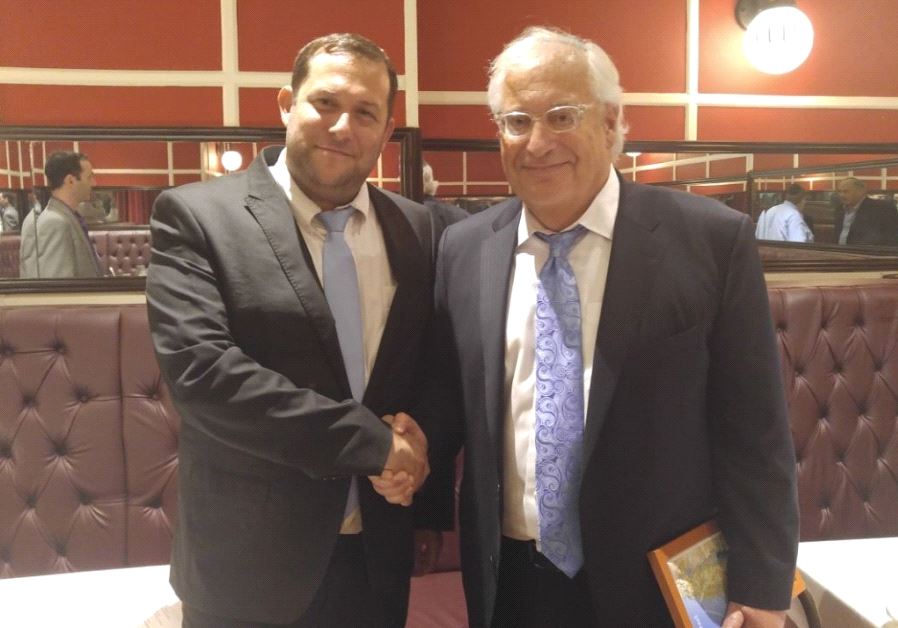 Yossi Dagan (L) with US envoy to Israel appointee David Friedman (photo credit: COURTESY OF THE SAMARIA REGIONAL COUNCIL)“The president’s sudden acknowledgment is a Band-Aid on the cancer of antisemitism that has infected his own administration,” the center’s executive director, Steven Goldstein, said on Tuesday.“His statement today is a pathetic asterisk of condescension after weeks in which he and his staff have committed grotesque acts and omissions reflecting antisemitism, yet day after day have refused to apologize and correct the record.Make no mistake: The antisemitism coming out of this administration is the worst we have ever seen from any administration.“The White House repeatedly refused to mention Jews in its Holocaust remembrance, and had the audacity to take offense when the world pointed out the ramifications of Holocaust denial.And it was only yesterday, President’s Day, that Jewish community centers across the nation received bomb threats, and the president said absolutely nothing.When President Trump responds to antisemitism proactively and in real time, and without pleas and pressure, that’s when we’ll be able to say this president has turned a corner. This is not that moment,” he said.In Washington, White House press secretary Sean Spicer also scolded the center.“I think [Trump] has been very forceful with his denunciation of people who seek to attack people because of their religion, because of their gender, because of the color of their skin. It is something that he is going to continue to fight and make clear that it has no place in this administration,” Spicer said.“It is ironic that no matter how many times he talks about this, it is never good enough. Today was an unbelievably forceful comment by the president as far as his denunciation of the actions that are currently targeted against Jewish community centers, but I think he has been very clear previous to this that he wants to be someone who brings this country together and not divide people.“I wish that they had praised the president for his leadership in this area. Hopefully, as time goes by, they [will] recognize his commitment to civil rights, voting rights and equality for all Americans,” Spicer added.In Israel, Dagan noted that the Anne Frank Center’s comments came as Israel is under attack from all directions, simply because it is a Jewish state.“Jews are killed here because of their religion,” he said. “The UN Security Council’s absurd condemnation of Israel, the only democratic state in the Middle East, was also clearly motivated by antisemitism.”He called on the UN to condemn the Palestinian desecration of Jewish graves on the Mount of Olives and the vandalism against Joseph’s Tomb in Nablus, otherwise known as the biblical city of Shechem.