Six things to watch for at the AIPAC policy conference

AIPAC remains the preeminent pro-Israel lobby and its conferences have been a reliable weathervane of where US Middle East policy is headed for the next six months. 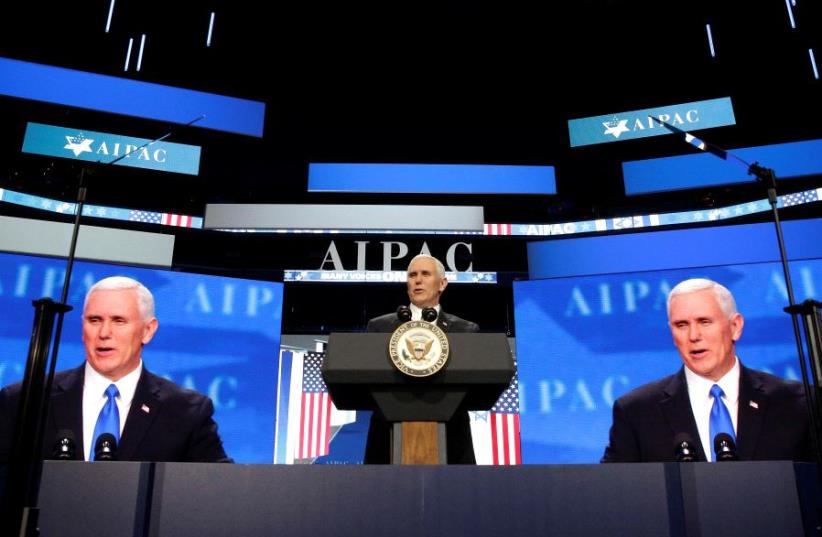 US Vice President Mike Pence delivers speech at 2017 AIPAC convention
(photo credit: REUTERS)
Advertisement
The American Israel Public Affairs Committee’s annual policy conference is coming up, running Sunday through Tuesday.AIPAC’s byword is bipartisanship and that’s a hard sell in the increasingly polarized Trump era. Still, AIPAC remains the preeminent pro-Israel lobby and its conferences have been a reliable weathervane of where US Middle East policy is headed for the next six months. Here’s what to look out for.Legislation — where bipartisanship lives or dies.By this time before a conference, AIPAC usually has a wish list of legislative actions or letters that it wants its activists to lobby for when they ascend to Capitol Hill on Tuesday afternoon.Unusually, there is not yet a list of “asks” circulating, likely because partisan differences are hindering agreement on bills. Instead, an AIPAC official offered JTA a broad outline of talking points on the Tuesday agenda, but stopped short of saying the points would necessarily be attached to legislation:–Security assistance: AIPAC wants Congress to codify the $38 billion over 10 years guaranteed to Israel under a Memorandum of Understanding signed in the waning days of the Obama administration. The lobby wants the House of Representatives to authorize the expenditure for five years (the maximum allowed for spending bills under House rules). Getting Congress’s imprimatur on the spending would prevent any president from threatening to withhold funds as leverage. Although there’s not yet a legislative vehicle for the funding, this might be AIPAC’s easiest ask. Sen. Lindsey Graham of South Carolina, a Republican, and Sen. Chris Coons of Delaware, a Democrat, this week came back from an Israel tour and agreed that the $38 billion package should only be a “floor” for U.S. assistance to Israel.–Iran: AIPAC wants more sanctions on Iran, particularly targeting the Iranian Revolutionary Guard Corps, the entity principally responsible for Iran’s military interventions in the region and its terrorism. The lobby wants to lower the sanctions-triggering threshold for IRGC ownership in a targeted entity; it is currently at 50 percent.AIPAC also wants to address President Donald Trump’s concerns with the 2015 deal between the international community and Iran, trading sanctions relief for a rollback of Iran’s nuclear program. Like Trump, AIPAC wants easier access for inspectors to Iran’s military bases, an extension or a lifting of “sunsets” for some of the provisions (currently between 10 and 15 years) and the expansion of the deal to roll back Iran’s ballistic missile program. This is where there is pronounced partisan disagreement: Democrats are wary of any moves they believe would ultimately scuttle the deal, brokered by the Obama administration; Republicans want to toughen the deal up (and some want to scuttle it altogether).–BDS: AIPAC backs bills in the House and Senate that would target the Boycott, Divest from and Sanction movement against Israel. A focus is the U.N. Human Rights Council list of companies that deal with Israeli settlements, which reportedly contains 22 U.S. companies. The bills in Congress would replicate 1970s anti-Arab boycott laws and make it illegal to affirmatively join the boycott. The bills had broad bipartisan support a year or so ago, but lobbying by pro-Palestinian groups and civil libertarians, in addition to the controversial application of state anti-BDS laws have led some Democrats to pull back their support.We know what Bibi will say. What will he hint?Israeli Prime Minister Benjamin Netanyahu will address the conference after he meets with Trump. (Times are not yet set.) A hefty part of Netanyahu’s speech will likely be in praise of the Trump administration: for moving the US Embassy to Jerusalem, for getting tough with Iran, for aggressively defending it at the United Nations. (Expect rock star welcomes for Administration speakers Vice President Mike Pence and UN envoy Nikki Haley.)
Pence vows US loyalty to Israel during AIPAC speech (credit: REUTERS)
Israel, however, is increasingly concerned that the Trump administration is handing Syria over to Russia and its allies — the Assad regime and Iran. The signs are increasing that even the specter of a permanent Iranian presence in Syria could draw Israel into a war. Will Netanyahu convey this concern, and how?

Peace plan? What peace plan?The White House peace team led by Jared Kushner, Trump’s son-in-law, keeps promising that it will unveil its proposal to get Israelis and Palestinians back to talks “soon.” The AIPAC official said a theme of the conference would be to urge the Palestinian Authority, which walked away from the pre-peace talks after Trump’s recognition of Jerusalem as Israel’s capital, back to the table.“Soon” is such a tease. Why not this weekend? A key member of the team, US Ambassador to Israel David Friedman, is among the 700 speakers at the conference. Maybe he can tell us what it’s about?AIPAC’s cozy again! Kind of.

For the last two conferences, the major all-hands plenaries were moved from the Washington Convention Center to the intimidating Verizon Center (now the Capital One Arena), an 18,000-seat stadium. That meant shlepping five blocks to Washington’s Chinatown.AIPAC activists were unhappy, and AIPAC was responsive: This year, the whole shebang is sticking to the convention center.“They would much prefer to be under one roof,” said the AIPAC official. “So we’ve made adjustments.”It’s still the biggest conference ever, with 18,000 attendees, including upwards of 3,500 students.A weekend away from Russia-gate.You’d think, right? AIPAC should be a bipartisan oasis away from the muckpile that is the special prosecutor’s investigation into allegations of collusion between Trump’s campaign and transition and Russia.You’d think, but nah. Two Jewish congressmen who have taken lead roles on either side of the controversy have speaking roles at the conference: Rep. Adam Schiff, D-Calif., the lead Democrat on the House Intelligence Committee, and Rep. Lee Zeldin, R-N.Y., a member of the House Foreign Affairs committee.Fun stuff!AIPAC’s “village,” in the bowels of the convention center, includes a simulated flight on the F-35, the state-of-the-art US combat aircraft which features Israeli modifications, and a representation of Israel’s Iron Dome anti-missile defense system.What, weapons depress you? Well, then enjoy the medical clown team, Dream Doctors, who administer to children in hospitals. Or check out the Israeli guide dogs trained to assist the vision-impaired and people suffering from PTSD. Finally, get your inner cheek swabbed at the Ezer Mizion station, the world’s largest Jewish bone marrow donor registry.