"It feels really great to be around people who know what I’m going through." 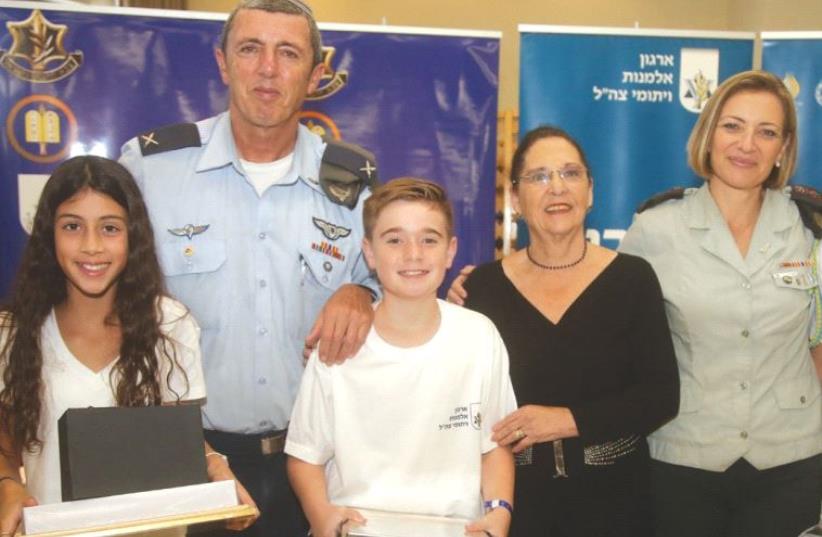 Celebrating in the capital on Thursday are, from left, Shai Efraty, Chief Military Rabbi Brig-Gen. Rafi Peretz, Andrew Voelke, IDF Widows and Orphans Organization chairwoman Tami Shelach, IDF Casualties Unit head Lt.-Col. Jocelyn Bash and Tomer Efraty
(photo credit: MARC ISRAEL SELLEM/THE JERUSALEM POST)
Advertisement
Andrew “AJ” Voelke was 8-years-old in 2012 when his father, US Army Major Paul Voelke, 36, was killed while serving in Afghanistan.  On Thursday, AJ and his mother, Traci, of Washington, DC, joined 30 Israeli children who also lost a parent in war, to hold a communal bar and bat mitzvah ceremony near Mount Herzl and to celebrate their milestones together at a festive event at the Jerusalem Theater.Hosted by the IDF Widows and Orphans Organization, the children met with President Reuven Rivlin and Minister of Defense Avigdor Lieberman at a gala event worthy of royalty.According to Yuval Lipkin, executive director of IDFWO, that was exactly the point.“IDFWO was established in 1991 by the Ministry of Defense for orphans of all defense security forces in Israel,” said Lipkin. “We have worked with approximately 5,000 widows and nearly 3,000 orphans. They are very special children, and have a lot of challenges. We are there for them.”Indeed, Lipkin said IDFWO works closely with children between the ages of six to 18 via a wide range of programs, including camps where they can spend time together, financial aid for school, medical grants, and critical emotional support.“When the children are together, it is the only time they can be themselves, with the same type of people who have been through the same things,” said Lipkin. “They don’t have programs for them in schools, so this is the only place where they can feel free.”After spending an all-expenses-paid, three-week trip in the US this summer with children from TAPS, IDFWO’s American counterpart, the 30 Israeli boys and girls were joined again by AJ to share their bar and bat mitzvahs.“It feels really good to be in Israel because it’s a holy place for Jewish people,” said AJ, now an 8th grader, moments before celebrating with his Israeli friends.Asked to describe his father, AJ smiled. “He was in the US Army, and he was a really good guy and really smart, and just a really fun person to be around.”Although devastated by the loss of his father, AJ said spending time with Israeli children who experienced a similar loss had been empowering.“It feels really great to be around people who know what I’m going through, and are just like me,” he said. “I feel really special to be here.”AJ’s mom, Traci, said IDFWO, which works directly with TAPS, has been an excellent resource for AJ and her 10-year-old son, Benjamin, to feel understood and accepted.“From the second we met our host family here, who also lost a father, we immediately knew that they understood the plight that we’ve been through,” she said. “It’s a different country, but similar feeling and emotions. And this is a huge life event that they are doing without their fathers, so it is a very happy occasion, but it is also very hard at the same time.”“So, it’s nice to be with other children who totally understand,” she continued. “Most people in the US don’t understand the emotions we’re going through.”Shay and Tomer Efraty, ages 12 and 13, who lost their father, Ehud, 34, a Special Forces paratrooper in Gaza in 2007, are sharing their bar and bat mitzvahs with AJ, and hosting the Voelke’s with their mother, Miri, during their stay in Israel.“I am having so much fun with all the activities they have for us,” said Shay at the Jerusalem Theater celebration.
“My father was a great man,” she continued. “He was killed when I was only 3, but I miss him. I have a lot of photos and videos of him.”Shay said IDFWO has been instrumental in helping her feel understood, and to navigate the difficult feelings engendered by her loss.“It is helpful to know that there are more kids like me, and that I can be with them, and I can talk with them, and I don’t feel different,” Shay said, noting she has made many close friends through the organization’s ongoing activities.
Tomer, who also has participated in several regional and international trips with children from IDFWO, echoed his sister’s sentiments.“I have a special relationship and connection with them,” he said. “Everybody is the same. They all lost a dad or mom. I feel grateful that [IDFWO] has helped my family and given us fun and visited us.”As a mother, Miri, who has a third child named Raz, said the organization’s aid has been invaluable.“This is very important, because when they are in school or with friends, they are the only ones whose father is gone,” she said. “It was a very difficult, life-changing event, so this helps them, because they have other kids like them who they can talk with and share the same feelings and same experiences.”Miri continued: “They feel free to laugh, they feel free to cry, and to speak about their feelings. They are not different when they are with the other children, and that is very helpful to them, and to me as their mom.
“It’s a great organization, and they’re doing great things for the kids.”