Soros compares Hungarian campaign against him to Nazi propaganda

Billboards posted nationwide show a grinning Soros, who was born in Hungary, and the words “Let’s not allow Soros to have the last laugh.” 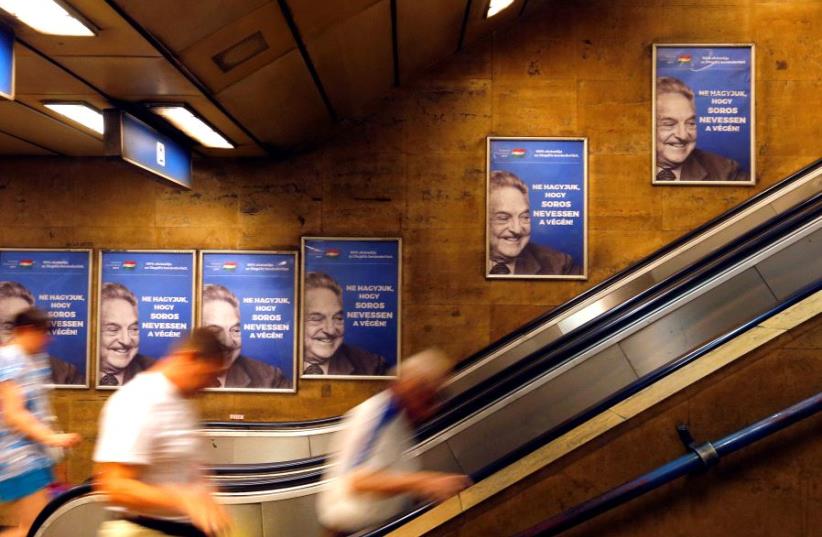 Hungarian government poster portraying financier George Soros and saying "Don't let George Soros have the last laugh" is seen at an underground stop in Budapest, Hungary July 11, 2017.
(photo credit: REUTERS/LASZLO BALOGH)
Advertisement
Jewish American billionaire George Soros said the current Hungarian government campaign against him evokes “Europe’s darkest hours,” referring to Nazi German propaganda.“I am distressed by the current Hungarian regime’s use of antisemitic imagery as part of its deliberate disinformation campaign,” Soros said in a statement issued in his name on Tuesday, according to reports.The government of Prime Minister Viktor Orban has paid for a nationwide campaign vilifying Soros over his support for efforts to allow migrants to enter the country. Jewish leaders there say the campaign against Soros has stoked antisemitic sentiment in the country.Billboards posted nationwide show a grinning Soros, who was born in Hungary, and the words “Let’s not allow Soros to have the last laugh.” Many of the billboards have been defaced with antisemitic graffiti.Soros has said that the government is misrepresenting his views on immigration ahead of the 2018 elections.“As a survivor of the Holocaust who hid from the Nazis in Budapest and later was himself a refugee, Soros knows first-hand what it means to be in mortal peril,” said the statement issued on his behalf. “He carries the memory of the international community’s rejection of Jewish refugees fleeing the Nazis. … It is from the crucible of those experiences that his empathy for refugees from war-torn Syria and elsewhere was born.”“Soros’s position is entirely consistent with mainstream European values. The claim that Soros is promoting a scheme to import a million illegal immigrants into Europe is Victor Orban’s fantasy,” the statement also said.Hungarian Jews and Israeli lawmakers have called on Israeli Prime Minister Benjamin Netanyahu to cancel an official visit to Hungary scheduled for July 18, to protest the campaign against Soros and remarks by Orban in praise of Hungary’s World War II-era antisemitic leader Miklós Horthy.It would be the first visit by an Israeli prime minister since Hungary disavowed Communism in 1989.Israel’s ambassador to Hungary on Sunday issued a statement denouncing the Hungarian government’s campaign against Soros. Israel’s Foreign Ministry later released a clarification saying that the statement was meant to address the resulting antisemitism, not defend Soros, who, it said, “continuously undermines Israel’s democratically elected governments by funding organizations that defame the Jewish state and seek to deny it the right to defend itself.”Soros is frequently vilified by European right-wing politicians for his support of pro-democracy efforts through his Open Society Foundations, and by pro-Israel activists for his support of Palestinian and Israeli human rights groups consistently critical of Israeli policies.