The ANC proposal is reportedly intended to keep South African citizens from potentially serving in the IDF. 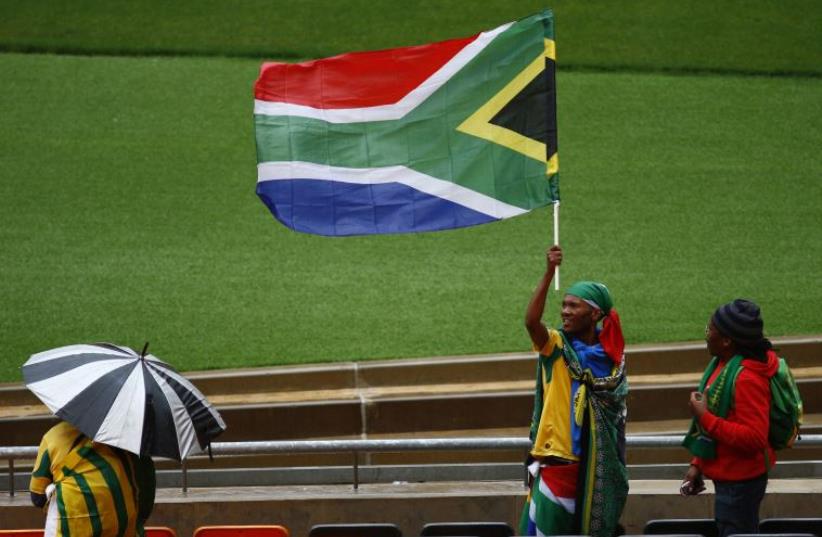 A man raises the South African national flag during the service for former South African President Nelson Mandela at the First National Bank Stadium
(photo credit: REUTERS)
Advertisement
South African Jewish groups expressed outrage on Monday over reported plans by the ruling African National Congress to consider outlawing dual citizenship for South African citizens, in an effort to stop them from holding Israeli citizenship and potentially serving in the IDF.South Africa’s Sunday Times newspaper first reported that the ANC’s general council will meet in October to discuss the issue. While the ban would reportedly be meant to target those with dual Israeli citizenship, millions of citizens of other countries would be affected as well.According to the Times, the initiative to prevent Jewish South Africans from holding dual citizenship and serving in the IDF came from the head of the ANC National Executive Committee on International Relations, Obed Bapela.Bapela said the “model” of dual citizenship may not have “a place in the world,” the Times reported.The ANC is also slated to discuss cracking down on private-sector ties with Israel, the report added.The South African Jewish Board of Deputies and the South African Zionist Federation issued a joint statement condemning the reported proposal.The groups said that Bapela had “undermined the very core value of South Africa’s democracy by proposing a change to our law purely to prevent one sector of our society, in this case, South African Jews, from having a relationship with Israel.”The Jewish groups questioned whether the initiative was supported by the ANC and President Jacob Zuma, or was held solely by extremists elements within the party.“This unfortunate political grandstanding by Bapela is motivated by his own narrow understanding of the Middle East conflict, which is based on religious fundamentalism and the BDS lobby within the ANC, and we would hope that in no way reflects the views of the ANC. This is not the first time that Bapela has attacked the Jewish community and its leadership,” the Board of Deputies and Zionist Federation stated.The groups accused Bapela of displaying “classic anti-Semitism” by questioning Jewish South Africans’ loyalty and calling to target Jewish businesses.“The South African Jewish community will not be bullied or intimidated by his threats and have sought a meeting with President Jacob Zuma and will request further meetings to clarify Bapela’s