A late-night program featured an anti-Semitic trope alleging Jews were promoting the worship of Satan. 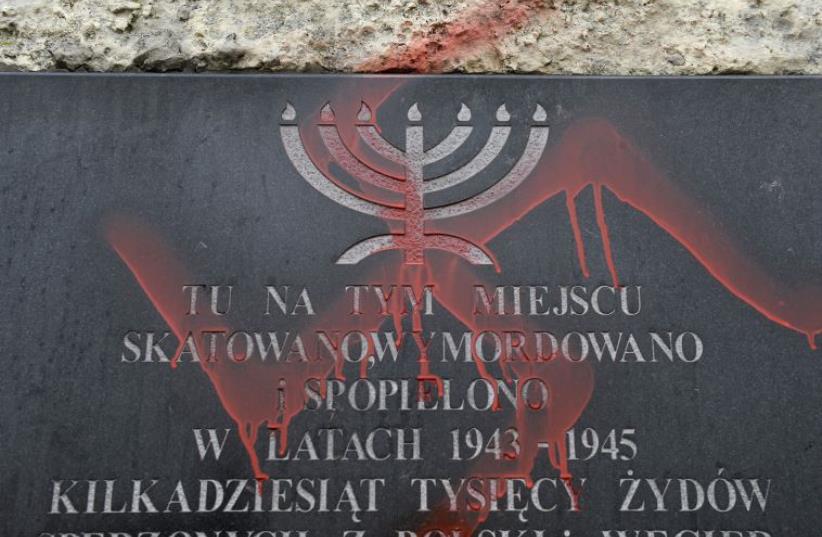 Anti-Semitic graffiti is seen on a monument dedicated to the victims of the Krakow ghetto located at the site of the former concentration camp in Plaszczow
(photo credit: REUTERS)
Advertisement
A Spanish state-owned radio station apologized for airing a late-night program that featured an anti-Semitic trope alleging Jews were promoting the worship of Satan.The assertion was part of a 30-minute show aired last month by the RTVE broadcaster and placed on its website.On Monday, the Anti-Defamation League called on Spain’s government to condemn what the ADL termed “more than a half-hour of unadulterated anti-Jewish conspiracy theories” aired by the A La Carta program.Titled “From the Inferno — The Jewish People: Propagator of the Satan Cult,” the text was lifted chapter and verse from “Plot Against the Church” — a 1962 book rife with anti-Semitic rhetoric written by a group of Mexican priests under the pseudonym Maurice Pinay.RTVE removed the item from its website sometime after Aug. 20, amid a public outcry initiated by Yigal Palmor, a senior spokesperson of the Jewish Agency for Israel. On Thursday, an RTVE official sent Palmor a letter of apology.RTVE “had no intention to insult the Jewish People,” read the letter. The broadcaster’s management expressed “its most sincere apologies for anything which might have been offensive.”Carlos Garrido Machado, a spokesperson for RTVE, told JTA Friday that his organization “takes very seriously the complaints and sensibilities of its listeners.” He stressed that, “while offensive, the program was never intended to be consumed as factual. It was fiction in the framework of a late-night show centered on horror and spooky subjects.”The outcry over RTVE coincided with an international controversy over the dis-invitation of the American Jewish singer Matisyahu from a music festival in Spain over his refusal to comply with organizers’ demand that he endorse a Palestinian state. Matisyahu, who alone was asked to make such a statement, was re-invited and performed last week at the festival after major Jewish groups decried his exclusion as discriminatory.“I don’t think Spain has any particular problem with anti-Semitism, though the phenomenon exists among some individuals, like anywhere else in the world,” Garrido Machado said.