Spielberg and Ford back together again for 5th Indiana Jones movie

The film will be in theaters in July 2019, the Walt Disney Co. announced Tuesday. 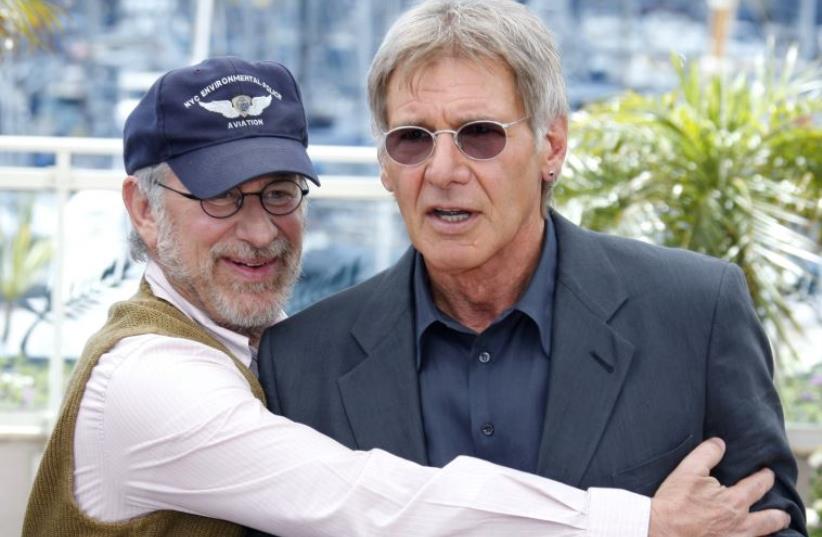 US director Steven Spielberg (L) positions cast member Harrison Ford at a photocall for the film "Indiana Jones and the Kingdom of the Crystal Skull" at the 61st Cannes Film Festival May 18, 2008.
(photo credit: REUTERS)
Advertisement
Director Steven Spielberg and Harrison Ford are teaming up to film a fifth “Indiana Jones” movie.The film will be in theaters in July 2019, the Walt Disney Co. announced Tuesday. Disney took over the rights to the “Indiana Jones” franchise from Paramount in 2013.It had been rumored that a different actor would take over the iconic role, but Spielberg reportedly insisted that no one other than Ford would play the renowned archaeologist and explorer.The fifth installment, which is yet untitled, will debut 11 years after the last film in the action-adventure series and 38 years after the first one, “Raiders of the Lost Ark,” in which Indiana Jones searches for the Ark of the Covenant, which is believed to still hold the Ten Commandments. Agents of Hitler are also after the ark.“Indiana Jones is one of the greatest heroes in cinematic history, and we can’t wait to bring him back to the screen in 2019,” said Alan Horn, chairman of Walt Disney Studios. “It’s rare to have such a perfect combination of director, producers, actor and role, and we couldn’t be more excited to embark on this adventure with Harrison and Steven.”Ford, 73, recently reprised his role as Han Solo in “Star Wars: The Force Awakens.”Social media was quick to poke fun at Ford’s age, with suggested titles for the new “Indiana Jones” film including “Indiana Jones and the Raiders of the Lost AARP,” “Indiana Jones and the Temple of Prunes,” and “Indiana Jones and the Curse of the Prosthetic Hip Joint.”