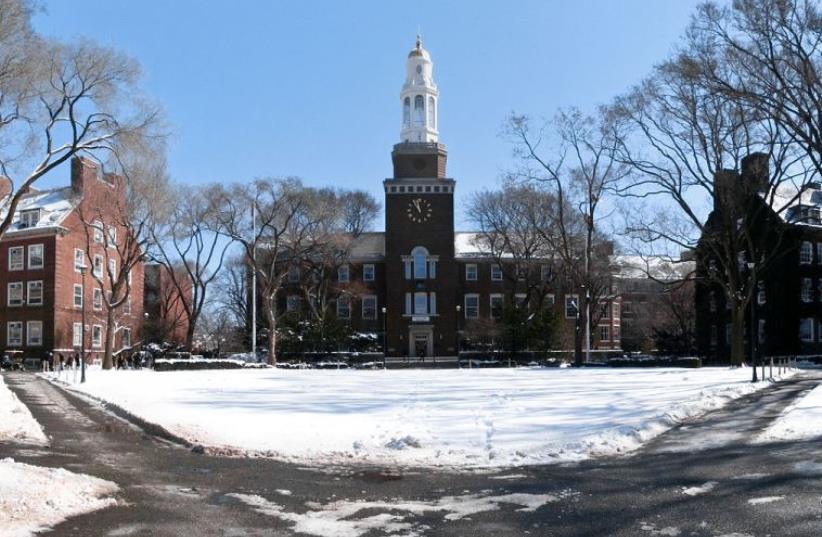 East Quad at Brooklyn College
(photo credit: GABRIEL LIENDO/WIKIMEDIA COMMONS)
Advertisement
NEW YORK - A group of Brooklyn College students interrupted a faculty council meeting on Tuesday and allegedly demanded that “Zionists” leave campus.Other demands ranged from calls for better pay for adjunct teachers to ending “racist” class offerings. According to a professor who spoke anonymously to the Jewish Telegraphic Agency, some of the faculty members at the meeting applauded during the students’ vocal protests, but it was not clear which demands the teachers were reacting to.The faculty member also told JTA that when computer science professor and faculty council head Yedidyah Langsam told the students they were “out of order,” they called him a “Zionist pig.”In a news release issued Tuesday, Brooklyn state Assemblyman Dov Hikind said he received complaints after the meeting from “dozens” of faculty members.“It’s just an absolute disgrace that something like this would happen in our own community,” Hikind said.Hikind also called on City University of New York, the public university system of New York City, to “implement a plan of action to prevent this kind of intimidation and disruption from reoccurring anywhere within CUNY.” The Anti-Defamation League denounced the incident on Thursday and commended the Brooklyn College president and senior vice president for their strong condemnation. “We are concerned about the manifestation of anti-Israel and anti-Semitic hatred at Brooklyn College,” ADL New York Regional Director Evan R. Bernstein said. “Incidents like this poison the atmosphere on campus and seek to intimidate Jewish students, and in this instance faculty.” “Such abhorrent comments only serve to divide CUNY, which prides itself on values of inclusivity,” he added. “The incident is a glaring example that the ugly rhetoric does not just target students, but the campus community at large.”Bernstein pointed out that this is not the first time higher education institutions witness “the conflation of social causes by anti-Israel activists”.“We urge Brooklyn College leadership and all academic institutions across New York State to make clear that anti-Semitism and anti-Zionism that denigrates Jews has no place on campus,” he said. Bernstein added that the ADL hopes the administration will investigate and take appropriate disciplinary action against the students responsible, and articulate specific ways to combat this issue.Back in November, ADL had commended CUNY for standing up against bigotry, prejudice and anti-Semitism after the student group “Students for Justice in Palestine” invoked anti-Semitic stereotypes when referring to CUNY leadership as a “Zionist administration” at Hunter College.