While Twitter has waged an aggressive campaign to suspend Islamic State users "white nationalists and Nazis operate with relative impunity." 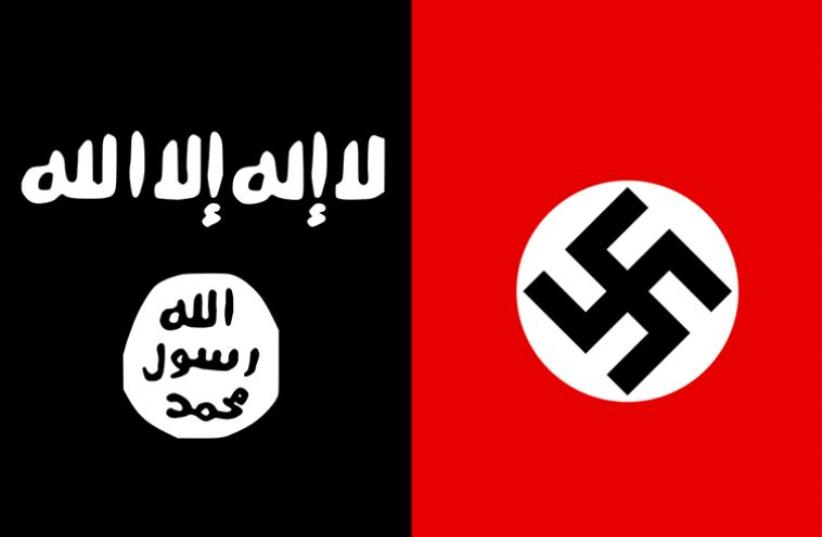 ISIS and Nazi flags
(photo credit: WIKIMEDIA)
Advertisement
WASHINGTON - White nationalists and self-identified Nazi sympathizers located mostly in the United States use Twitter with "relative impunity" and often have far more followers than militant Islamists, a study being released on Thursday found.Eighteen prominent white nationalist accounts examined in the study, including the American Nazi Party, have seen a sharp increase in Twitter followers to a total of more than 25,000, up from about 3,500 in 2012, according to the study by George Washington University's Program on Extremism that was seen by Reuters.The study's findings contrast with declining influence on Twitter Inc's service for Islamic State, also known as ISIS, amid crackdowns that have targeted the militant group, according to earlier research by report author J.M. Berger and the findings of other counter-extremism experts and government officials."White nationalists and Nazis outperformed ISIS in average friend and follower counts by a substantial margin," the report said. "Nazis had a median follower count almost eight times greater than ISIS supporters, and a mean count more than 22 times greater."While Twitter has waged an aggressive campaign to suspend Islamic State users - the company said in an August blog post it had shut down 360,000 accounts for threatening or promoting what it defined as terrorist acts since the middle of 2015 - Berger said in his report that "white nationalists and Nazis operate with relative impunity."Reuters was unable to independently verify the findings.Asked about the study, a Twitter spokesman referred to the company's terms of service, which prohibit promoting terrorism, threatening abuse and "hateful conduct" such as attacking or threatening a person on the basis of race or ethnicity.The company relies heavily on users to report terms of service violations.The report comes as Twitter faces scrutiny of its content removal policies. It has long been under pressure to crack down on Islamist fighters and their supporters, and the problem of harassment gained renewed attention in July after actress Leslie Jones briefly quit Twitter in the face of abusive comments.Berger said in an interview that Twitter and other companies such as Facebook Inc added difficulties in enforcing standards against white nationalist groups because they are less cohesive than Islamic State networks and present greater free speech complications.The data collected, which included analysis of tweets of selected accounts and their followers, represents a fraction of the white nationalist presence on Twitter and was insufficient to estimate the overall online size of the groups, the report said.Accounts examined in the study possessed a strong affinity for US Republican presidential nominee Donald Trump, a prolific Twitter user who has been accused of retweeting accounts associated with white nationalism dozens of times.Three of the top 10 hashtags used most frequently by the data set of users studied were related to Trump, according to the report, entitled "Nazis vs. ISIS on Twitter." Only #whitegenocide was more popular than Trump-related hashtags, the report said.The Trump campaign did not respond to a request for comment.