On Thursday, the attack prompted the United Nations Security Council to issue its strongest condemnation of Palestinian terror since September’s uptick in attacks. 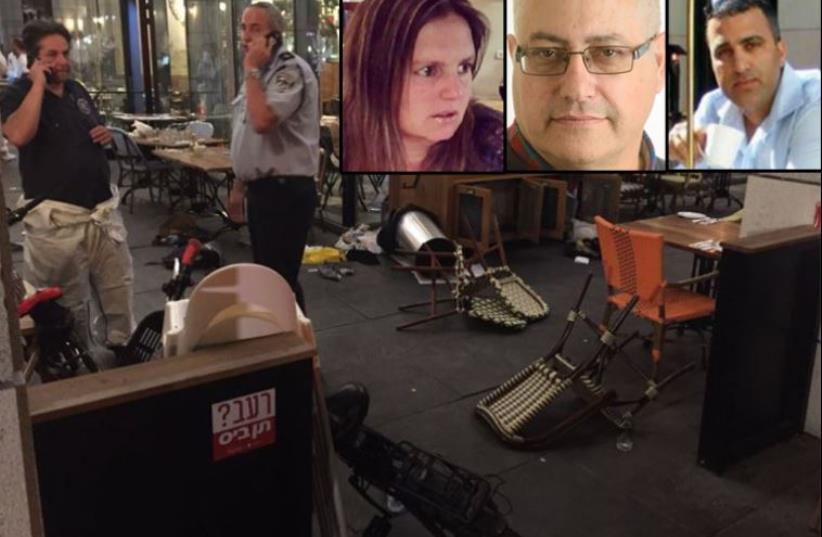 Scene of shooting attack in Tel Aviv
(photo credit: FACEBOOK,DANNY MECHLIS/BGU,Courtesy)
Advertisement
Israel imposed a blanket closure on Palestinians in the West Bank following the killing of four Israelis in a terrorist attack in Tel Aviv, which drew condemnations internationally but also praise by the well-known Muslim cleric Yusuf al-Qardawi.The closure means no entry by Palestinians into Israel will be permitted until Sunday, during the Jewish holiday of Shavuot. Only urgent medical cases will be allowed through and passages between Israel and the Gaza Strip will also remain closed, the Israel Defense Forces said in a statement Friday.The steps follow the slaying of Michael Feige, Ilana Naveh, Ido Ben Ari, Mila Mishayev at a café in Tel Aviv’s Sarona compound during a shooting attack by two Palestinian cousins from the Hebron area, Mohammad Ahmad Mahamra and Khaled Mahamra.On Thursday, the attack prompted the United Nations Security Council to issue its strongest condemnation of Palestinian terror since September’s uptick in attacks.The council condemned “in the strongest terms” the attack and expressed its “deepest sympathy and condolences to the families of the victims and to the Government of Israel.” The text of the council’s statement added that “terrorism in all its forms and manifestations constitutes one of the most serious threats to international peace and security.”But Yusuf al-Qardawi, a Qatar-based religious authority and Muslim Brotherhood leader who is one of Sunni Islam’s most highly-regarded personalities, wrote on Twitter following the attacks that “Israel was always the first to do evil and mischief, and the resistance is trying to respond to defend itself. This is crystal clear and undeniable.”All the victims were gunned down except for Ilana Naba, 39, whose body had no bullet holes, police said. She is believed to have died of a cardiac arrest during the shooting. Following her family’s objection to an autopsy, Israel Police petitioned the Supreme Court obtain permission to perform the procedure anyway but the court rejected the request, Army Radio report Friday. Naba, who had four children with her husband Alon, was buried Friday.Presumptive Democratic U.S. presidential nominee Hillary Clinton and Donald Trump, the Republican Party’s nominee, both condemned the attack.“I condemn the heinous terrorist attack in Tel Aviv today,” Clinton said in a statement. “I send my deepest condolences to the families of those killed and I will continue to pray for the wounded. I stand in solidarity with the Israeli people in the face of these ongoing threats, and in unwavering support of the country’s right to defend itself.”Trump wrote on Facebook: “Just as fast as the condolences arrive from the civilized world is the praise arising out of the uncivilized one. Hamas praised the attack, calling the attackers ‘heroes’.” He added he found this “despicable.”Hundreds of Israelis and foreign nationals visited the Sarona compound, a central park with many restaurants and shops, where candles in memory of the victims were lit in memorial events that the compounds’ management helped organize. On Friday, 20 foreign ambassadors visited the part, along with locals carrying Israeli flags.The United States’ ambassador to Israel, Dan Shapiro, visited the site Thursday evening. “Heartening to see so many people at Sarona Market, in defiance of terror. We stand alongside you Israel,” he wrote on Twitter.