'The Donald' confirmed as speaker at AIPAC's main extravaganza

Trump maintained that he would be a neutral broker of Israeli-Palestinian peace. 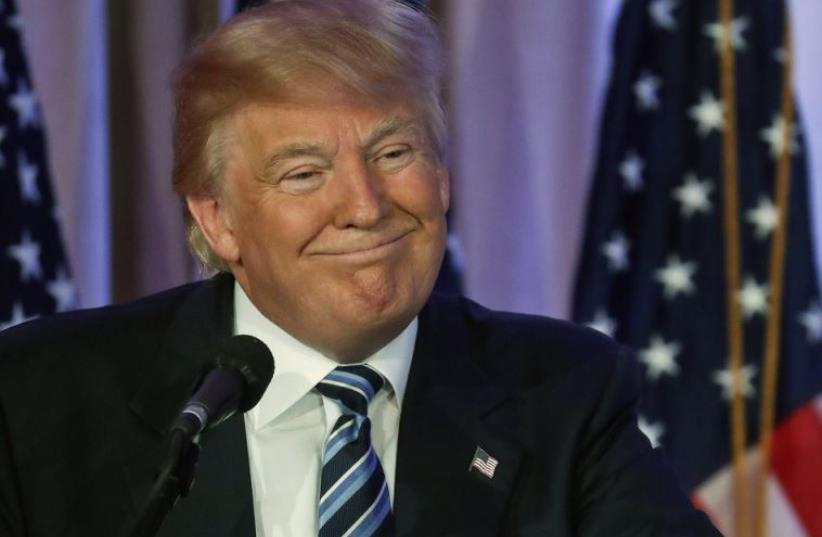 Republican US presidential candidate Donald Trump
(photo credit: REUTERS)
Advertisement
Republican presidential frontrunner Donald Trump will address the pro-Israel lobby AIPAC during its main annual event in Washington, DC, it was confirmed on Friday.The news comes just less than a day after Trump maintained that he would be a neutral broker of Israeli-Palestinian peace — parrying tough criticism from his rivals by noting his love for Israel and his daughter Ivanka Trump’s Jewish family.Sen. Ted Cruz, R-Texas, was the first to challenge the real estate magnate on his Israel posture in the debate broadcast by CNN on Thursday from Miami, ahead of March 15 primaries in three states with substantial Jewish populations: Florida, Ohio and Illinois.“On Israel, Donald has said he wants to be neutral between Israel and the Palestinians,” Cruz said.“As president, I will not be neutral,” Cruz said, and cited the murder in a terrorist attack in Israel this week of Taylor Force, an American tourist from Cruz’s home state, Texas.“He was an Eagle Scout, he was a West Point graduate, he was an Army veteran,” Cruz said. “He was murdered by a Palestinian terrorist this week in Israel, and I don’t think we need a commander in chief who is neutral between the Palestinian terrorists and one of our strongest allies in the world, the nation of Israel.”Cruz also criticized Trump for saying he would not immediately suspend the Iran nuclear deal. Trump has said the Iran deal is a failure but that he would consult with experts to determine what the best U.S. options were. Cruz and Sen. Marco Rubio, R-Fla., also on the debate stage, have pledged to nix the deal upon taking office.Trump in his reply said there was no one “on this stage that’s more pro-Israel than I am.” He cited his 2004 appearance as Grand Marshal at a 2004 Israel Day parade in New York, prompting some laughter in the audience.“I have a lot of — I have tremendous love for Israel,” he continued. “I happen to have a son-in-law and a daughter that are Jewish, OK? And two grandchildren that are Jewish.” Trump’s daughter Ivanka Trump is married to Jared Kushner, a scion of another real estate development family.Trump went on to say that brokering a peace deal would require a degree of neutrality.“If I go in, I’ll say I’m pro-Israel and I’ve told that to everybody and anybody that would listen,” he said. “But I would like to at least have the other side think I’m somewhat neutral as to them, so that we can maybe get a deal done.”Rubio and Ohio Gov. John Kasich, the fourth GOP candidate, also sharply criticized Trump, both saying that it was destructive to insist that a peace deal was doable in the near term.“The policy Donald has outlined, I don’t know if he realizes, is an anti-Israeli policy,” Rubio said. “Maybe that’s not your intent but here’s why it is an anti-Israeli policy: There is no peace deal possible with the Palestinians at this moment.”Kasich agreed. “I don’t believe there is any long-term permanent peace solution,” he said. “And I think pursuing that is the wrong thing to do. I believe that every day that we can [foster] stability in that region by supporting the Israelis and making sure they have the weapons and the security that they need with our 100 percent backing is the way to proceed in the Middle East in regard to Israel.”The tone of the debate was more civil than it has been in recent forums, which have devolved into insult free-for-alls, but the stakes were high. Kasich and Rubio need to score wins in their home states of Ohio and Florida, respectively, on Tuesday if they hope to stay in the race.Rubio’s campaign blasted out an email immediately after the exchange, with the subject line, “Trump Is No Ally to Israel.”