Jewish rock legend is one of two artists at the 60th annual Grammy Awards to win a Grammy after their passing. 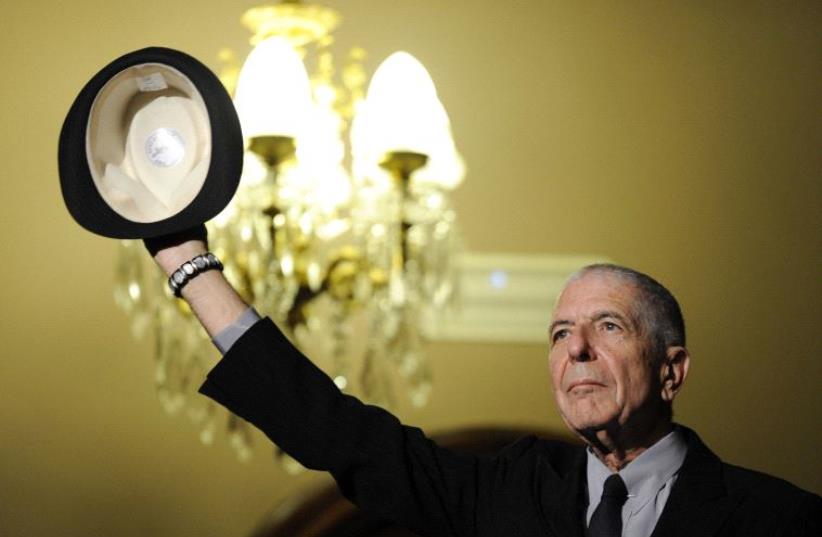 Leonard Cohen
(photo credit: REUTERS)
Advertisement
The late Jewish-Canadian rock star Leonard Cohen, who died last year at 82, won a rock album Grammy for his swan song, “You Want It Darker” on Sunday at the 60th annual Grammy Awards.
Leonard Cohen - You Want It Darker (Lyric) (Youtube/ LeonardCohenVEVO)
Produced by his son Adam, the grim, restrained album by the longtime Angeleno won out over Chris Cornell’s “The Promise,” “Run” by Foo Fighters, “No Good” by Kaleo and Nothing More’s “Go to War.”In the rock category, the Philadelphia rock band the War on Drugs earned its first Grammy Award for its album, “A Deeper Understanding.” Also nominated were Mastodon, Metallica, Nothing More and Queens of the Stone Age.Cohen was a singer songwriter whose Jewish-infused work became a soundtrack for melancholy.He was born in 1934 in Montreal, was playing folk guitar by the time he was 15, when he learned the resistance song, “The Partisan,” working at a camp, from an older friend.“We sang together every morning, going through The People’s Song Book from cover to cover,” he recalled in his first “Best Of” compilation in 1975. “I developed the curious notion that the Nazis were overthrown by music.”His influences included Irving Layton, the seminal Canadian Jewish poet who taught at McGill, and like Cohen, grappled with the tensions between the secular world and the temptations of faith.Cohen, in his 70s in the late 2000s, began once again to tour and record; a manager had bilked him of much of his fortune. He released his final album, “You Want It Darker,” last month.He often toured Israel, and he expressed his love for the country — he toured for troops in the 1973 Yom Kippur War — but he also expressed sadness at the militarism he encountered there. Under pressure from the boycott Israel movement to cancel a 2009 concert, he instead donated its (much needed by him) proceeds to a group that advances dialogue between Palestinians and Jews.Tickets to the stadium at Ramat Gan sold out in minutes. His Israeli fans embraced him that September night, and he returned the love, sprinkling the concert with Hebrew and readings from scripture and ending it with the blessing of the Cohens.In a profile of Cohen in The New Yorker, Bob Dylan compared his fellow singer-songwriter to Irving Berlin — linking three iconic Jewish musicians in one poignant assessment.Cohen is survived by a son and a daughter.———
©2018 Los Angeles Times
Visit the Los Angeles Times at www.latimes.com
Distributed by Tribune Content Agency, LLC.
—————