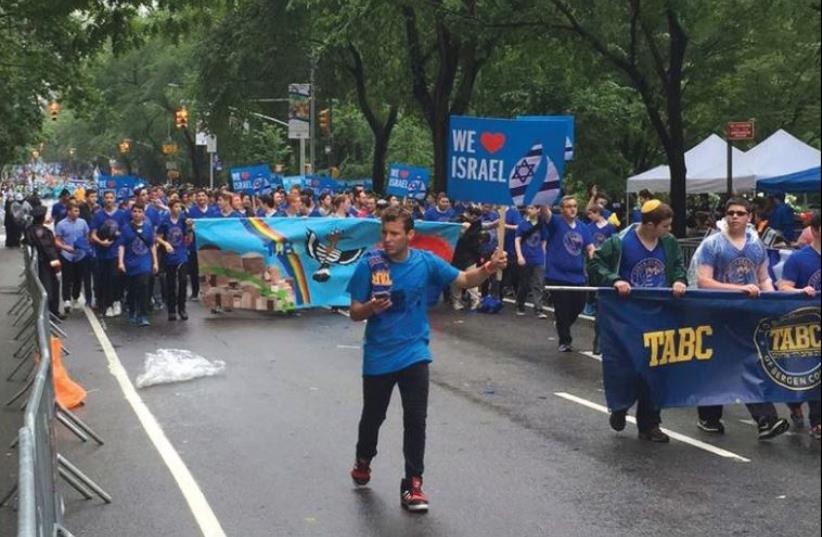 CELEBRANTS MARCH in the Celebrate Israel Parade on Fifth Avenue in Manhattan yesterday, alongside Central Park.
(photo credit: SHIMON MERCER WOOD)
Advertisement
NEW YORK – Thousands of people armed with plastic ponchos and umbrellas gathered along Fifth Avenue to defy the heavy rain and watch the 52nd Celebrate Israel Parade on Sunday, New Yorkers’ annual tribute to the Jewish state.“Our support for Israel doesn’t stop for the rain,” 18-year-old Allison Abrahams said as she marched holding a “NY loves Israel” sign.Just hours before the parade, New York Gov. Andrew Cuomo signed executive order 157, which orders all state agencies to divest from businesses and organizations that support the Boycott, Divest and Sanctions movement.A list of such businesses will be compiled and issued to state agencies over the next months.“New York stands in solidarity with Israel today and always,” Cuomo said. “This state will not stand for the politics of discrimination in any form, and we will continue to demonstrate our unwavering support for the people of Israel in the fight for freedom, liberty and democracy.”Cuomo said he was proud to sign the executive order, which is the first one of the kind signed in the US.“New York and Israel share an unbreakable bond and I pray that the Israeli and Palestinian people will find a way to live side by side and find peace, prosperity and security,” he said.Ambassador to the United Nations Danny Danon, who held the largest anti-BDS gathering to date last week, welcomed the governor’s announcement and said it was “another effective strike against those seeking to harm Israel.”The Celebrate Israel Parade included tens of thousands of marchers from more than 250 Jewish and pro-Israel organizations, floats, marching bands and performers such as the cast of the Broadway production of Fiddler on the Roof and the Yeshiva University- based a cappella group The Maccabeats.This year’s march, held under the theme “Israel: Sight, Sound and Spirit!” included the participation of officials such as Cuomo, New York Mayor Bill de Blasio and New York State Comptroller Tom DiNapoli, as well as Israeli representatives including Consul-General in New York Ido Aharoni and several members of Knesset. The 102-story Empire State Building was lit in blue and white for the occasion.Rivky Jodlo, who came to watch the parade with her young daughter, told The Jerusalem Post that it was important for her to come to Fifth Avenue despite the bad weather.“It’s important to come here to assert our right to live in the land, to have a state, to be Jews,” she explained.“Thirty years ago I was in Jerusalem and there was a march for Jerusalem Day,” Jodlo recalled. “I was concerned because there were a lot of stabbings and bad things at that time, and when I showed up I found a whole group of people in wheelchairs rolling themselves through the cobblestones of Jerusalem, so if they can do that, I can certainly stand in the rain.”For the first time, the parade also marked International Unity Day, which was created in memory of Eyal Yifrah, Gil-Ad Shaer and Naftali Fraenkel, the three Israeli teenagers whom Hamas kidnapped and murdered in Judea in June 2014. Four of their parents marched on Fifth Avenue on Sunday.Unity Day, sponsored by the UJA-Federation of New York and the Gesher organization, aims to promote global Jewish unity and peoplehood.The New York Police Department deployed hundreds of policemen, including Counter-Terrorism, emergency service and K9 officers, to secure the event.