The Conference of European Rabbis is the primary rabbinical alliance in Europe, bringing together for more than 700 religious leaders of the mainstream synagogue communities in Europe. 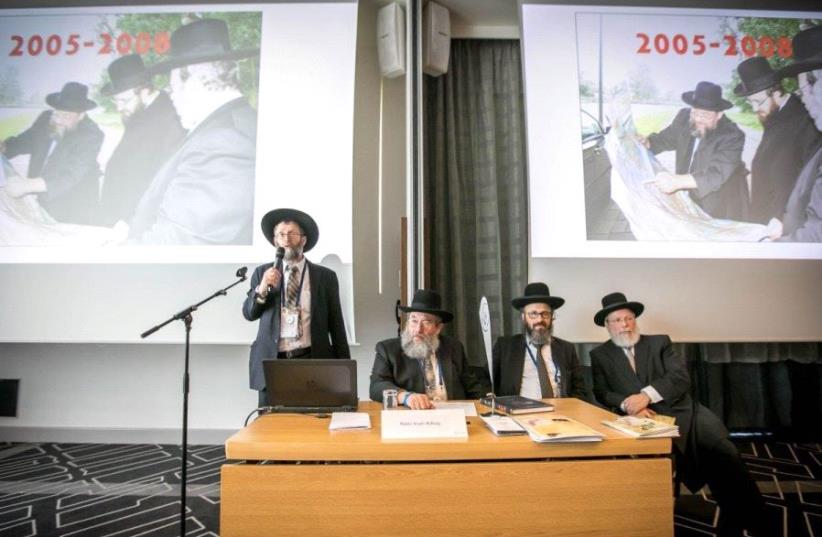 Conference of European Rabbis panel on the first day of the organization’s three-day biennial convention in the Dutch capital, which drew over 250 chief rabbis and rabbis from across the continent.
(photo credit: CONFERENCE OF EUROPEAN RABBIS)
Advertisement
AMSTERDAM – Centrists are joining extremists in the fight to ban religious freedoms, Rabbi Pinchas Goldschmidt, president of the Conference of European Rabbis, has warned.Goldschmidt, who is also the chief rabbi of Moscow, spoke on Monday, the first day of the organization’s three-day biennial convention in the Dutch metropolis, which drew more than 250 chief rabbis and rabbis from across the continent.Speaking a day after Marine Le Pen’s landslide defeat in France, Goldschmidt said: “There was a time when we could all recognize who was antisemitic. They were from the far Right or the far Left. In recent elections these groups have suffered significant losses: Le Pen in France, [Gert] Wilders here in the Netherlands and UKIP in the UK. The problem now is that centrist parties are adopting these policies to attract voters.”Goldschmidt referred to two decisions in recent days that if enacted would restrict religious practices of both Jews and Muslims: a unanimous vote on Friday by the parliament in Belgium’s French-speaking region to ban religious slaughter, and another by Norway’s Progress Party a day later in favor of a ban on religious circumcision of boys under the age of 16.“Centrist parties are taking the stances of the extreme parties and I think we can all agree that we are at the start of a fight for the future of Europe,” he said, adding that such bans would pose a major threat to the continuity of organized Judaism in Europe.Chief Rabbi of France Haim Korsia said that while he rejoiced in Emmanuel Macron’s presidential victory, a third of his country had voted for a candidate who wants to ban religious slaughter and kippot in the street. “It’s against Jews and it’s also against France,” he said, stressing the importance of unity in the face of such challenges, including working together with the Muslim community.Belgium’s Chief Rabbi Abraham Guigui remarked that while there are ways to find kosher meat elsewhere if the ban goes ahead in Wallonia, “it’s a war for principle.”“Tomorrow it will happen in other regions and it moves from place to place... today it’s shechita and tomorrow it will be something else,” he lamented, rejecting animal rights activists’ arguments that shechita causes more pain than post-stunning slaughter.“There is no scientific tool to measure the pain,” he said, adding that professors had found shechita causes less stress to the animals, but activists had chosen to ignore this.The campaign is “also against the Muslims, but we are collateral damage... and we are working together with the Muslims on this,” Korsia added.UK Chief Rabbi Ephraim Mirvis delivered the keynote address, emphasizing the role of rabbis to convey the positive nature of Judaism.“Today there are many secular and atheist people who hate religion,” he stated, saying it makes some uncomfortable.“But another reason is because they see that religion causes war. It’s up to us to show... that it’s not like that with us – that religion brings happiness and meaning to life.”Mirvis and his Ukrainian counterpart, Chief Rabbi Yaakov Dov Bleich, also emphasized the importance of strengthening Jewish education to counter assimilation.“As rabbis of communities we need to also run after the Jews who don’t come to shul,” Mirvis said, as the pair discussed the importance of outreach to unaffiliated Jews.