Top Paris rabbi: Aliya not born out of fear 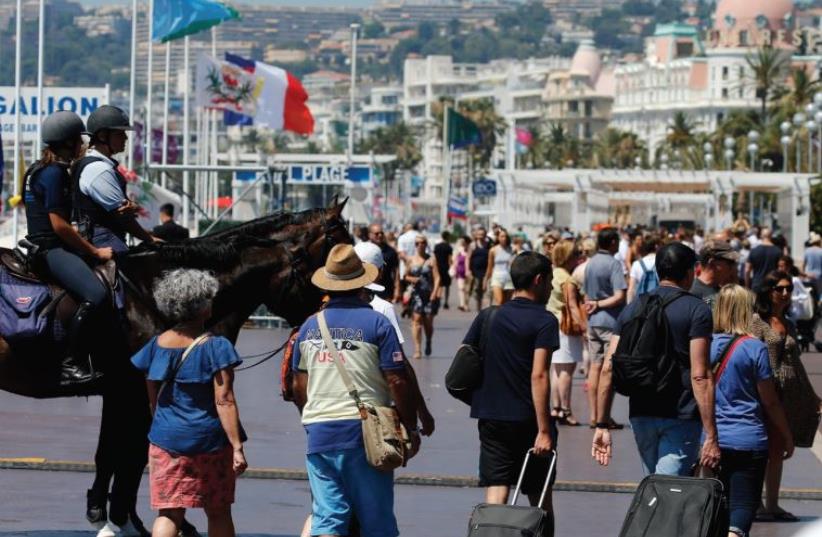 MOUNTED POLICE patrol Nice’s Promenade des Anglais yesterday as tourists with suitcases walk near the site of the Bastille Day terrorist attack.
(photo credit: REUTERS)
Advertisement
The motivation to make aliya is not born out of fear of terrorism, according to Rabbi Moshe Sebbag of Paris’s Great Synagogue. He said that rather, the decision to make aliya is the result of Jewish education and history.“Every Jew thinks that maybe one day they will move to Israel, but it’s the result of a very serious thought process,” he told The Jerusalem Post Sunday, as France entered its second day of mourning for the 84 victims of the Nice terrorist attack on Bastille Day.Rabbi Sebbag also emphasized that French Jewry is an integral part of French society, referencing comments made earlier this year by French Prime Minister Manuel Valls that France without its Jewish community is “not France.” The premier made these remarks at a memorial service for the victims of the 2015 attack on a kosher supermarket in Paris.“The Jews feel this in their soul,” said Rabbi Sebbag.He added that no matter what religion one follows, everyone can be hit by terrorism, “It’s global.” He remarked that a loss of hope and sense of desperation pervades the country during these difficult times. He added, however, the same perseverance that is seen in Israel – to keep living despite the devastation caused by terrorism – is now evident in France. “Yesterday evening in Nice, the streets were full,” he notes. “People are determined to carry on, and not let this influence their day to day lives.”“Of course, we can’t be naive,” he hastens to add. “Jews are always more sensitive and we are under tight security, which we are increasing now, but I don’t think the recent attack will cause a wave of Jews to move to Israel. However, for those Jews who do want to leave the country, the most natural place to go would be Israel.”Chief Chabad emissary of the French Riviera, Rabbi Yosef Pinson, echoed this sentiment. “This attack wasn’t against Jews. It was against France, against the entire country,” he said. “Jews are always more sensitive and we are under tight security, which we are increasing now, but I don’t think the recent attack will cause of wave of Jews to move to Israel.”“Across France in general there is a lot of tension because of the recent terrorist attack and this might make people want to leave. But everyone feels hurt – the whole of France.”On Wednesday, the largest aliya flight to come from France this summer, is set to land at Ben-Gurion airport. More than 200 French Jews will be aboard the flight, organized by the Jewish Agency for Israel (JAFI) in collaboration with the Ministry of Aliyah and Immigrant Absorption, and Keren Hayesod-UIA. JAFI emphasized that the flight was planned months ago without any connection to the recent events in France.“French Jews who immigrate to Israel are coming out of choice,” stated Jewish Agency Chairman Natan Sharansky.“They have a whole world of opportunities before them, and they are choosing to come to Israel. Their choice demonstrates that Israel affords a sense of Jewish identity and attachment to those Jews who wish to take an active part in the Jewish story.”Minister of Aliya and Immigrant Absorption Sofa Landver will join Sharanksy in welcoming the new olim at the airport. “In light of the difficult weekend in Nice, I wish to welcome the immigrants from France who chose to immigrate to Israel now,” she said. “French aliya strengthens Israel, and the government of Israel works tirelessly to ease their absorption – the Ministry of Aliyah and Immigrant Absorption will continue to work to remove obstacles to employment and create new opportunities for young immigrants from France, to illustrate to them that Israel is their home.”Rabbi Yechiel Eckstein, founder of the International Fellowship of Christians and Jews (IFCJ) is also working to bring French Jews to Israel, and recently returned from the IFCJ office in Nice.“We just brought a flight of 82 French Jews on aliya to Israel and are preparing to bring more than 150 to Israel this month, including several Nice families,” he noted.The rabbi said that while incidents such as the Bastille Day attack do not cause French citizens to flee the country, they do “prompt those who are already planning on moving to Israel, to come quicker than they may have.”The Fellowship says it has received more than 5,100 calls and hundreds of emails from French Jews inquiring about aliya in recent months, and expects that number to climb on the heels of the Nice attack, the latest in a series of deadly terror attacks that have rocked France.“We mourn for the victims of this despicable attack and pray for a speedy recovery for those who were hurt,” said Rabbi Eckstein. “Sadly, this horrific attack underscores the pressing need to help bring as many Jews who wish to leave France to their homeland in Israel.”“The Jews there believe things will get worse before they get better,” he told the Post. “Many feel it’s time to go to Israel.”The French Jewish community is the largest in Europe and the second largest in the world outside of Israel, numbering almost half a million.French Jewish immigration to Israel has surged since 2012, breaking aliya records from other Western countries.According to the Jewish Agency, almost 10 percent of the French Jewish community has immigrated to Israel since the year 2000, half of those in the past five years.More than 30,000 immigrants arrived in Israel in 2015, the highest number in over a decade. Nearly 8,000 came from France amid a wave of terror attacks.