One woman, the mother to the three US natives, was Syrian but was not a citizen. She had permanent residency – a green card – and had lived in the United States for 20 years. 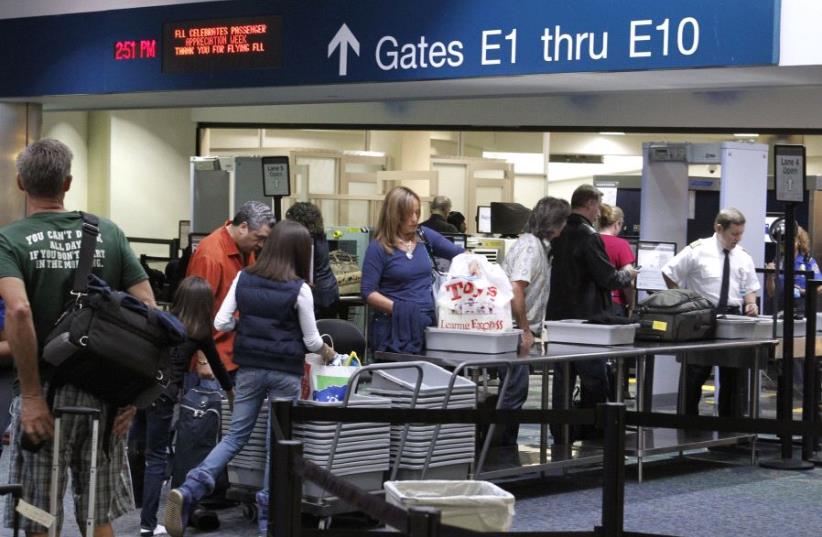 Passengers line up at a security checkpoint operated by the Transportation Security Administration (TSA) at Fort Lauderdale-Hollywood International Airport in Fort Lauderdale, Florida November 23, 2010.
(photo credit: REUTERS)
Advertisement
Among the travelers delayed for hours by the Trump administration’s executive orders banning travel from seven predominantly Muslim countries were seven people with ties to the Syrian Jewish community, according to a report.Florida Today, the state’s subsidiary of USA Today, reported Monday that federal authorities had detained the seven people for over six hours disembarking at Port Canaveral from a Royal Caribbean cruise ship. At least three of them were US born, the news site said, quoting Ruth Singer, an attorney involved in the case.One woman, the mother to the three US natives, was Syrian but was not a citizen. She had permanent residency – a green card – and had lived in the United States for 20 years.No explanation was given for the detention, but there have been multiple instances since President Donald Trump issued the order last Friday of authorities detaining green card-holding travelers who have citizenship in one of the seven banned countries, one of which is Syria.Some members of the Syrian Jewish community in the United States maintain ties with Syria so they can travel there and supervise properties and businesses still held in the country. The US Syrian Jewish community generally maintains friendly, if quiet, ties with the Assad regime.Singer told Florida Today that the seven were treated well and quoted one of the men as saying as he left, “It’s a good thing we were Jewish.”