Trump proposes to cut around 5% of the museum's total budget. 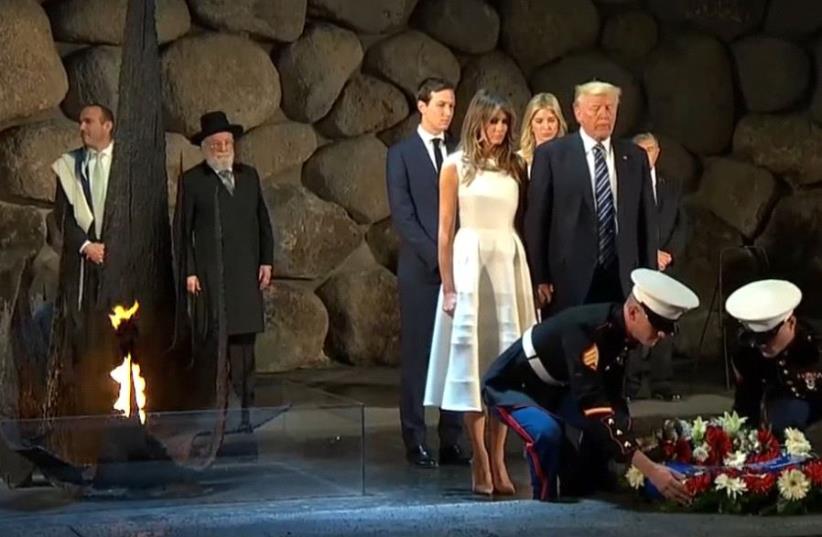 Donald Trump, Melania Trump, Ivanka Trump, and Jared Kushner place a wreath at Israel's Yad Vashem holocaust memorial.
(photo credit: screenshot)
Advertisement
Sixty-four members of US Congress formed a bipartisan group to object to $3 million worth of cuts to the US Holocaust Museum that President Donald Trump proposed in his budget, The Hill reported on Friday.The cuts amount to about a 5% decrease in the museum's overall operating budget, and are part of a larger move by Trump to shift discretionary funding from nondefense items to defense programs. In protest, the 64 congressmen addressed a letter to the interior appropriations subcommittee. "In our view, the mission of the museum has never been more important, particularly as the as the number of antisemitic attacks around the world rises," reads the letter, which was spearheaded by Reps. Stephanie Murphy (D-FL), Carlos Curbelo (R-FL), John Katko (R-NY) and Krysten Sinema (D-AZ)."Attempts to cut funding for the museum are misguided, and this letter demonstrates a strong, bipartisan commitment to protecting the museum and the educational value it provides to all Americans," Sinema told The Hill. American-Defamation League CEO Jonathan A. Greenblatt said "The US Holocaust Memorial Museum is the most important American institution preserving the memory of the six million Jews who were murdered by the Nazis and educating future generations about the importance of combating hate and bigotry.""In these divided times," Greenblatt continued, "with increasing numbers of hate crimes against Jews and other religious minorities, this museum's mission is as critical as ever. We call on Congress to fully fund the Holocaust Museum.”Trump visited Yad Vashem Holocaust memorial during his May trip to Israel. Trump – who came under fire for omitting any mention of Jews in a statement on International Holocaust Remembrance Day – clearly referenced the six million Jews who perished in what he described as “history’s darkest hour,” and “the most savage crime against God and his children," in his speech at the site. Tamara Zieve contributed to this report.