Tunisia’s culture minister, Mohamed Zine El-Abidine, made the announcement on Sunday, the last day of the traditional Lag Ba'omer pilgrimage near the Ghriba synagogue on Djerba. 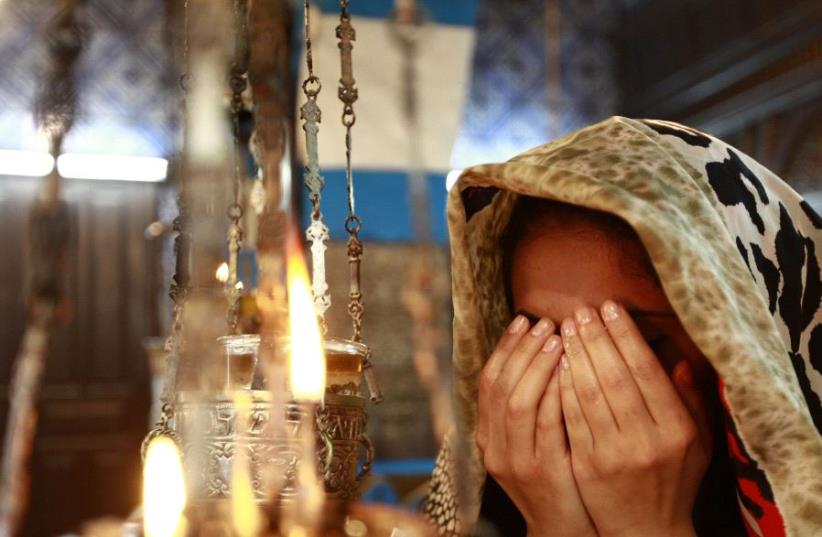 A Jewish worshipper prays during a pilgrimage to the El Ghriba synagogue in Djerba April 28, 2013
(photo credit: REUTERS)
Advertisement
Tunisia will seek UNESCO World Heritage status for the island of Djerba, the site of an annual Jewish pilgrimage.Tunisia’s culture minister, Mohamed Zine El-Abidine, made the announcement on Sunday, the last day of the traditional Lag Ba'omer pilgrimage near the Ghriba synagogue on Djerba, an island off the coast of Tunisia.He did not say when his country would file the application. He said that the application would highlight the rich religious heritage of the island, which is home to centuries-old mosques, churches and synagogues, the French news agency AFP reported.
Security high for annual Jewish pilgrimage in Tunisia.
The Ghriba synagogue is the oldest in Africa.The pilgrimage takes place on or around Lag Ba'omer, a break during the 49 days of mourning between Passover and Shavuot, drawing hundreds of the nation’s Jews and visitors from Israel.Some 3,000 pilgrims attended this year’s Jewish pilgrimage to the island, and were guarded by tight security in the wake of attacks and threats of attacks. Earlier this month, Israel’s National Security Council Counter-Terrorism Bureau issued a severe travel warning, calling on Israelis not to travel to the country. A similar warning was issued last year in advance of Lag Ba'omer.The synagogue, in the village of Hara Seghira, or Er-Riadh, dates back to 586 BCE, although the current building was reconstructed in the 19th century. El Ghriba is sometimes cited as North Africa’s oldest synagogue. In 2002, terrorists blew up a vehicle near the synagogue, killing 21.Prior to that attack as many as 8,000 pilgrims came to the island.In March 2015, an Islamic State terrorist attack at the Bardo Museum in Tunis killed 23, mostly tourists. The Islamic State claimed then that it would commit more attacks in the country.Around 1,500 Jews live in Tunisia today.