In recent weeks, Erdogan has expressed an interest in renewing ties ruptured over Israel’s 2009 war with Hamas in the Gaza Strip. 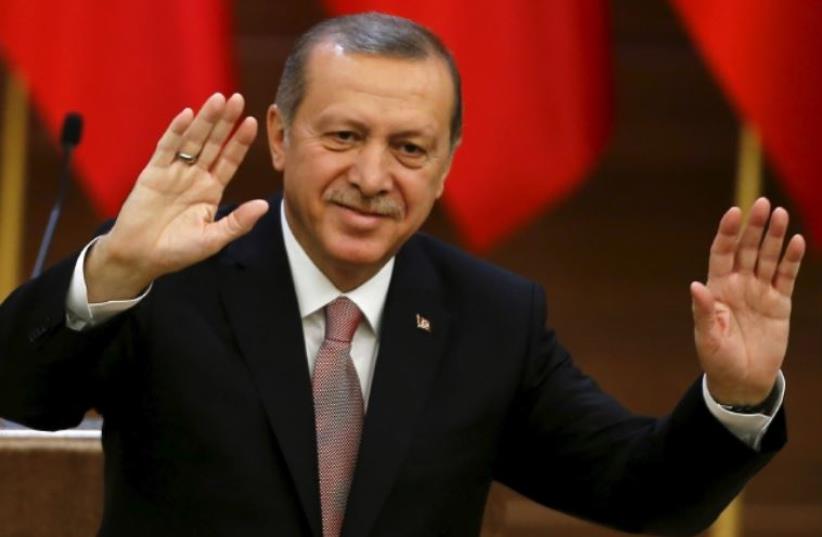 Turkish President Recep Tayyip Erdoğan greets religious leaders at the Presidential Palace in Ankara, November 26
(photo credit: REUTERS)
Advertisement
Turkey’s small Jewish community feels “safe and secure” despite being placed in the middle of Ankara and Jerusalem’s ongoing political feud, leaders of one of the United States’ largest Jewish representative organizations said on Sunday.Speaking to reporters at the opening of the Conference of Presidents of Major American Jewish Organizations’ annual Jerusalem leadership gathering, chairman Stephen Greenberg and executive vice chairman Malcolm Hoenlein painted an upbeat picture of a government doing its best to provide security for its Jewish minority.Greenberg, Hoenlein and around 50 other Jewish organizational leaders met with Turkish President Recep Tayyip Erdogan together with the head of the local Jewish community this week, holding a discussion against the backdrop of Turkish efforts to reduce the strains in its ties with the Jewish state.“They do feel safe and secure,” said Greenberg. “The current president of the Turkish-Jewish community and [Erdogan] have a good relationship.”While the community boasts an excellent school, its predominantly aging population poses a demographic challenge. “Putting that aside the community is really doing very well,” he asserted.In recent weeks, Erdogan has expressed an interest in renewing ties ruptured over Israel’s 2009 war with Hamas and then a deadly Israeli raid in 2010 on a Turkish aid ship attempting to breach Israel’s blockade of Gaza.During Israel’s 2014 war in Gaza, Erdogan sparked outrage with his demand that Turkish Jewry “release a statement against the Israeli government.”Erdogan’s demand for Turkish Jews to denounce Israel, as well as his comments comparing the Jewish state to Nazi Germany and accusing it of perpetrating a genocide against the Palestinians, serve as a veiled threat against their community, former Anti-Defamation League national director Abraham Foxman said in 2014.Meanwhile, a study conducted by the Hrant Dink Foundation last January found that anti-Semitism was the most common racial or religious prejudice in the Turkish media, with Jews and Armenians the subjects of just over half of the recorded incidents in a media landscape filled with “biased and discriminatory language use.”Sixty-nine percent of Turks harbor anti-Semitic attitudes, according to a 2014 ADL poll.The Jewish community in Turkey has kept a relatively low profile in recent years as a matter of policy, with a spokesman telling The Jerusalem Post in 2013 and 2014 that “we are not giving interviews for the time being.”It appeared that this policy was beginning to change late last year, however, with the usually closed and self-effacing Jewish community holding its first public hanukkia lighting since the founding of the republic nearly a century ago, marking a possible shift in how the community interacts with the larger society.According to the Jewish Salom weekly newspaper, community chairman Ishak Ibrahimzadeh said he believed attitudes toward Jews were changing in Turkey and that the community was experiencing a “turning point.”In January, however, tensions seemed to return when vandals spray-painted hate graffiti on the Istipol Synagogue in Istanbul just days after a one-time prayer service was held there, the first in 65 years, according to the Turkish publication Today’s Zaman.“There is widespread anti-Semitism voiced in Turkey and it gets in the way of celebrating the richness of cultural diversity in this country,” the editor of Salom was quoted as saying.“Of course there are some connections between our community and Israel; members of our community have family that live there and might have emotional connections but we have nothing to do with their political policies.”Asked about recent events, Hoenlein said he believes the situation is “better than it was” and that the “words of [Erdogan] could not have been stronger regarding protecting the Jewish community and separating it from politics and calling anti-Semitism a ‘war crime.’” Even though there is still anxiety about wearing a kippa on the street, “we would maybe not have heard [such statements] a few years ago,” he said.Erdogan was very clear that “anti-Semitism and Islamophobia are war crimes,” Hoenlein stated, checking his handwritten notes from the meeting.Erdogan’s words to the Jewish representatives appear to be modeled after a statement that his office issued last month referring to the Holocaust and Judeophobia as “a crime against humanity, just like Islamophobia.”That statement was promoted by criticism of the Turkish president’s assertion that “Hitler’s Germany” provided a model for “a presidential system in a unitary state.”Asked if Erdogan was attempting to smooth over concerns over his rhetoric by meeting with American-Jewish leaders, Hoenlein told the Post “the president kept making clear to us that he keeps the political issues of Israel separate from the Jewish community.”Of course, Erdogan did raise the issues of his relations with both Washington and Jerusalem, and “of course, [stated] that we could help overcome some of these differences, but he said the relationship with the Jews was never indexed to other issues.”“I think he certainly sees us as a component in his effort” to repair relations but he “said that several things are separate, his relationship with the US, with Israel and with the Jews. He said several times that criticism of Israel isn’t [criticism] of the Jewish people.”Erdogan cited recent efforts to restitute property to the community and “the community was happy to set up meetings” with the government, Hoenlein added.The Conference of Presidents of Major American Jewish Organizations also raised the issue of Erdogan allowing Hamas to maintain offices in Turkey but did not receive a response, although the president did talk about a federal system being a possible solution to the division of Cyprus, Hoenlein recalled.Jerusalem Post staff and JTA contributed to this report.