U. of Illinois bill denies link between antisemitism and anti-Zionism

More than 400 Jewish students walked out of the university's student government meeting. 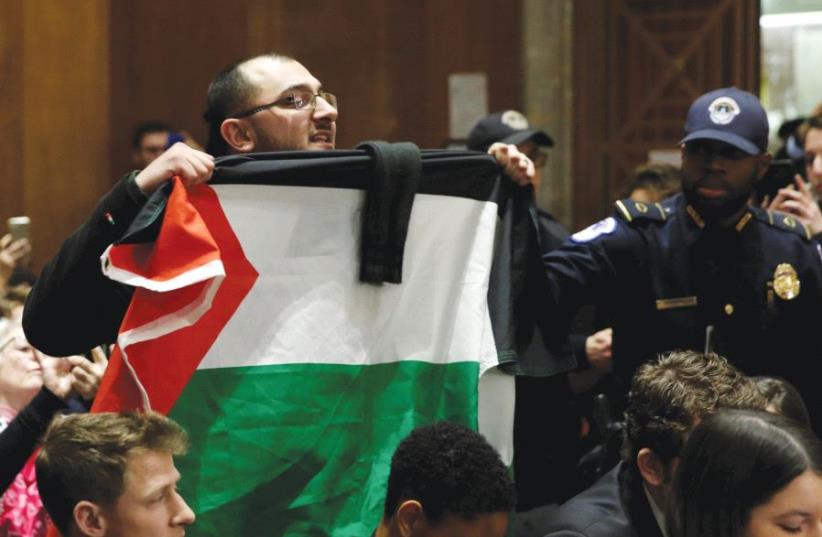 A MAN with a Palestinian flag shouts anti-Israel slogans in Washington.
(photo credit: REUTERS)
Advertisement
The University of Illinois Urbana-Champaign (UIUC) student senate passed a resolution on Wednesday denying the link between anti-Zionism and antisemitism. The resolution, entitled  “Condemning Ignorance of Racism and Equating Anti-Zionism and Antisemitism,” passed by a vote of 29-4 with four abstentions. "The resolution before you is absurd," Lauren Nesher, a representative of the university's Jewish community said at the meeting, according to Fox News Illinois. "Never again will anyone allow the Jews to feel unsafe on this campus, whether we be affected by swastika graffiti, neo-Nazi vitriol on the quad, or university-sponsored presentations which uniquely seek to delegitimize the establishment of a Jewish state."The resolution, which claimed that equating anti-Zionism and antisemitism was false and a scare tactic against Palestinians, was drafted on October 16, in the middle of the Jewish holidays, the Algemeiner reported. The vote for the bill was set during the Jewish holiday of Sukkot."This resolution was written without Jewish input. Not a single Jewish cultural house was consulted, and yet it purports to speak for the campus community,” Nesher said, according to the Algemeiner, adding that she is a member of the pro-Israel group IlliniPAC.“We watched as it was bee-lined through the senate and the committee during some of our holiest of days,” Nesher said, concluding her speech and inviting the hundreds of Jewish students at the meeting to walk out with her. 400 of them did.Shouts of "Free Palestine" erupted as the students left, according to Fox News Illinois.The university's Students for Justice in Palestine (SJP) chapter posted a statement regarding the resolution on its Facebook page."Zionists targeted student senators, their families, and SJP members, slandering them as terrorists," SJP UIUC wrote. The group said its members were "saddened" by the walkout, claiming it represented Zionist students' unwillingness to "engage in dialogue." They said that the resolution was "not an effort to silence Jewish voices, but rather an effort to uplift all marginalized voices on campus, and condemn the Chancellor's repeated anti-Palestinian sentiment." One of the students in the walkout was Ian Katsnelson, the university's only Jewish senator. “They choose to willingly not listen,” he told the Algemeiner.Katsnelson added: “I feel that it’s actually pretty ironic: This resolution has even brought our community closer together on such a common purpose and common goal of being proud to be Jews on this campus.” Nesher was not alone in speaking out against the resolution. Student body vice president Jack Langen said, “We are using our position as student leaders to define what the Jewish community goes through. “I believe this is wrong, and we would be speaking for a community that has publicly disagreed with how we would be representing them,” Israel Hayom reported.After the students walked out, Illini Chabad leaders Michael Michael Faibishenko and Daniel Raad led the group in a vigil for victims of antisemitic violence, the Algemeiner reported.