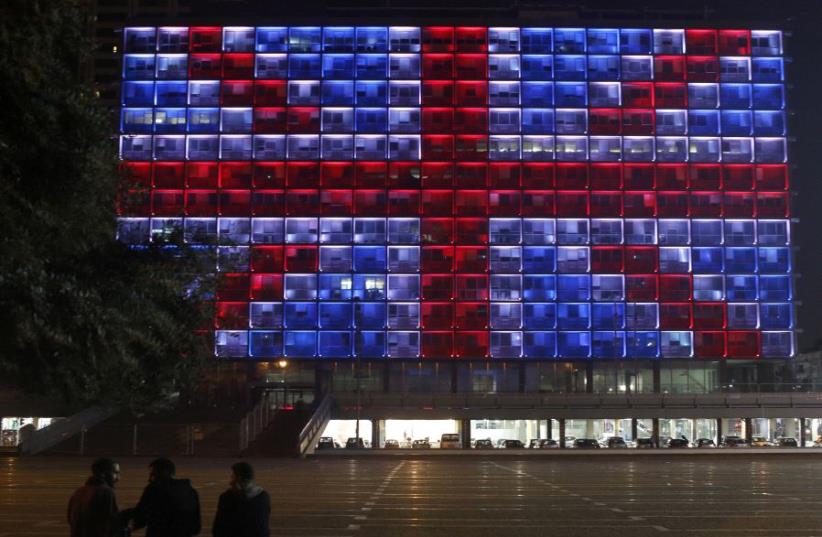 The building of the city hall in Tel Aviv's Rabin square in Israel is illuminated in solidarity with Britain for the attack on Westminster Bridge in London March 22, 2017
(photo credit: REUTERS)
Advertisement
The United Kingdom's chief rabbi held a joint vigil with religious leaders from the Muslim and Christian community Friday morning in honor of the victims killed in London during a terror attack earlier in the week, according to The Jewish Chronicle. Chief Rabbi Ephraim Mirvis, speaking outside Westminster Abbey, described the event as "a powerful statement of togetherness," adding that the citizens of Great Britain "will never be cowed" by terrorism. The vigil was also attended by the Archbishop of Canterbury, Justin Welby, Imam Khalifa Ezzat of the London Central Mosque and Sheikh Mohammad al Hilli of the UK's Shia community, and organized together with Cardinal Vincent Nichols, the Catholic Archbishop of Westminster.Khalid Masood, 53, killed three people near Britain's parliament on Wednesday in a deadly car ramming and knifing attack before being shot dead by police. Some 40 people were also wounded, with seven in critical condition.
One shot, several injured in UK parliament attack in London on March 22, 2017 (credit: REUTERS)
The Islamic State later took responsibility for the assault, but the exact nature of Masood's relationship with the terror organization remains unclear. “Right now we stand here together, leaders of Christianity, Islam and Judaism," Mirvis continued, addressing a crowd that had gathered to pay their respects.“We have come here in friendship on behalf of our communities. We extend our condolences to the families of those murdered, we pray for those who have been injured, and we proclaim – no person and no event will drive a wedge between us. Together, we will prevail.”Following the rabbi's statements, participants held a minute of silence for the victims. Mirvis later told The Jewish Chronicle that it was important to show solidarity with London's diverse religious community, saying that the event "seemed to me as being a very appropriate idea, and when we reached out to colleagues, they all welcomed it."“What we experienced today was a very powerful statement of togetherness, and I very much welcome all the contributions that were made by the faith leaders here today,” the rabbi added.