He visited two Jewish-run NGOs in Mumbai that provide help and assistance to poverty stricken communities. 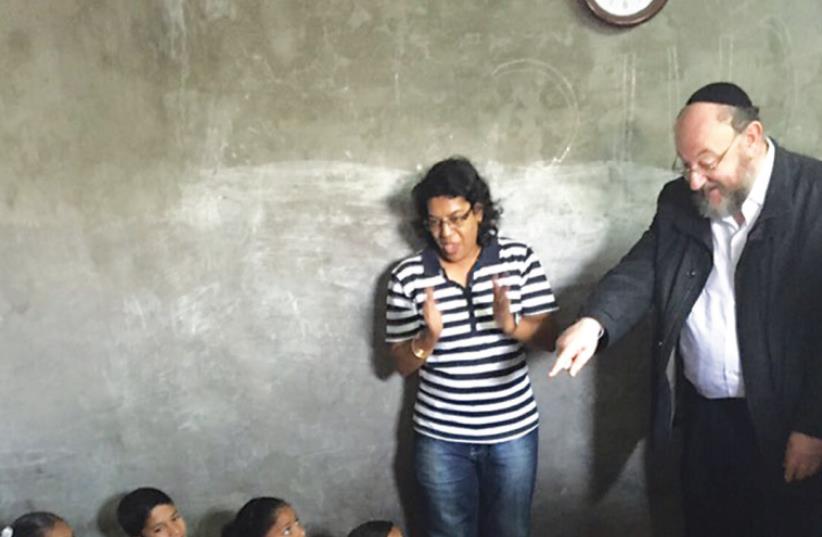 UK CHIEF RABBI Ephraim Mirvis teaches a Gabriel Projectsponsored class to children in Mumbai during his 11-day trip to India this past week.
(photo credit: UK CHIEF RABBI’S OFFICE)
Advertisement
Following a trip to India, UK Chief Rabbi Ephraim Mirvis lauded Jewish aid organizations working there and said the Jewish community cannot ignore world suffering.Mirvis returned Thursday from an 11-day trip to India, the first ever of a UK chief rabbi, where he visited 19 Jewish communities in Delhi, Mumbai, Calcutta and Cochin.He took the time to visit two Jewish-run NGOs in Mumbai that provide help and assistance to poverty stricken communities, as well as to visit the Economic Rural Development Society in Kolkata, funded in part by a the UK Tzedek charity.“As Jews, we have a responsibility to ensure that, where possible, our charity extends beyond our own community to people who we may never meet but who are so deserving of our help,” said the chief rabbi, adding that he was “calling upon all Jews to recognize that responsibility.”Mirvis visited the Gabriel Project Mumbai organization which cares for vulnerable children living in slums and poor rural areas by providing for their education, health and nutrition.He also stopped at its partner organization Sundara, which works to reduce preventable hygiene-related deaths by creating sustainable soap recycling programs for underserved populations around the world.“I was enormously moved by what the Gabriel Project is doing in the slums in India, and its affect is enormous,” he told The Jerusalem Post.Despite recent calls in the UK to reduce government foreign aid following massive flooding in parts of the country, Mirvis insisted that such assistance, along with non-governmental assistance and funding, was still a moral necessity.“Obviously a lot of thought needs to go into priorities for aid, and charity starting at home is a Jewish concept. But every human being is created in the image of God and we have to recognize suffering around the world,” he said.“When I visited Greece and saw what is being done for the refugees there, I was very proud of the contributions being made by the Jewish community in the UK.We can’t solve everything but that doesn’t mean we shouldn’t start and shouldn’t contribute.“When I see lives being saved in Kolkata, the hundreds of children educated and the thousands fed and the genuine change that is being made, I am very pleased to be identified with such efforts.”The Gabriel Project Mumbai, Sundara and Tzedek are all partners of OLAM, a coalition of 40 organizations dedicated to promote, enhance and showcase the impact of Jewish organizations and individuals in the field of global volunteering, aid and development.OLAM Executive Director Dyonna Ginsburg welcomed the emphasis that Mirvis has placed on the goal of global social responsibility and Jewish involvement in such initiatives.“We are delighted that someone of the stature of Chief Rabbi Mirvis has placed the issue of social responsibility on the highest agenda, especially in the Jewish world,” said Ginsburg. “Jewish tradition and historical experience has taught us to take responsibility, help make the world a better place and look after the stranger.”