The charity is funded by the EU, the Irish government, as well as numerous other non-state charitable trusts and organizations. 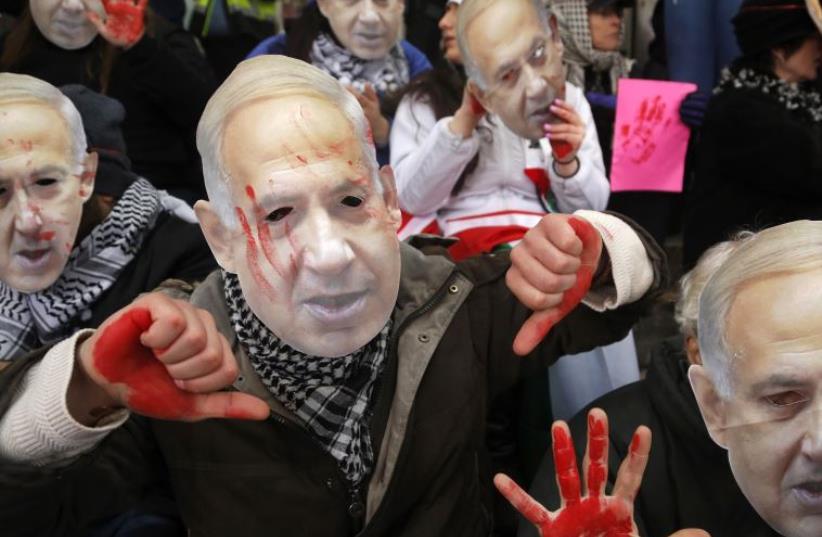 Anti-Israel demonstrators led by the protest group Code Pink wear masks of Prime Benjamin Netanyahu as they sit at the entrance to the AIPAC policy conference in Washington
(photo credit: REUTERS)
Advertisement
War on Want, a vitriolic, ant-Zionist registered charity in the UK has had funding it received from the British government cut, ostensibly because of its heavily political activities against the State of Israel. A spokesman for the UK’s Department for International Development (DFID), which administers the country’s foreign aid program, said on Friday that funding had been discontinued for War on Want, apart from a one project in Northern Ireland, the Daily Telegraph reported on Saturday. Officials within the department said that the UK “deplored incitement on both sides of the Israeli-Palestinian conflict.” according to the report. War on Want, which according to the watchdog group NGO Monitor has received  close to £500,000 between 2012 and 2015, has a long history of political activism against Israel. In February, the charity sponsored the “opening plenary” of Israeli Apartheid Week at the School of Oriental and African Studies, part of the University of London, at which one of the speakers, Sahar Francis of the prisoner rights group Addameer, alleged that Israel harvests organs from Palestinians. The Facebook invite for the event referenced the current spate of Palestinian terrorism, saying that that Israeli Apartheid Week 2016 was “Inspired by the ongoing popular resistance across historic Palestine” and comes as “Palestinian youth and students across historic Palestine are intensifying their struggle against a decades-long brutal Israeli settler-colonial regime.”In Israeli Apartheid Week 2015, War on Want activists protested on UK university campuses against Israel with large cardboard cutouts of M4 assault rifles and imitation panels of the separation barrier. According to the Telegraph, another speaker at the event, Malia Bouattia of the UK’s National Union of Students said that the British government’s campaign against Islamist extremism was being advanced by “all manner of Zionist and neo-con lobbies.”War on Want is also a strong advocate of the Boycott, Divestment, Sanctions campaign against Israel, and frequently accuses the Jewish state of war crimes, ethnic cleansing and apartheid.The organization is funded by the EU, the Irish government, as well as numerous other non-state charitable trusts and organizations. “This is an important, albeit belated, step by the British government,” said Prof. Gerald Steinberg, president of NGO Monitor, which has submitted documentation to DFID about War on Want’s campaigns against Israel. “Other institutional donors, in particular the European Union, should follow suit and immediately end their funding for this anti-human rights organization.” “Governments should not be funding hate, nor should they support NGOs that contradict and undermine their policy goals,” continued Steinberg. “Unfortunately, the British government has other NGO problems to address,” he added, noting that the UK government continues to fund politicized organizations that campaign against Israel. On its website, War on Want denied that its funding by DFID had been cut, saying that it has not sought funding from the UK government for a number of years.