Organizers for the pro-Palestinian festival claimed that they have already sold 2,000 ticket at £20 each. 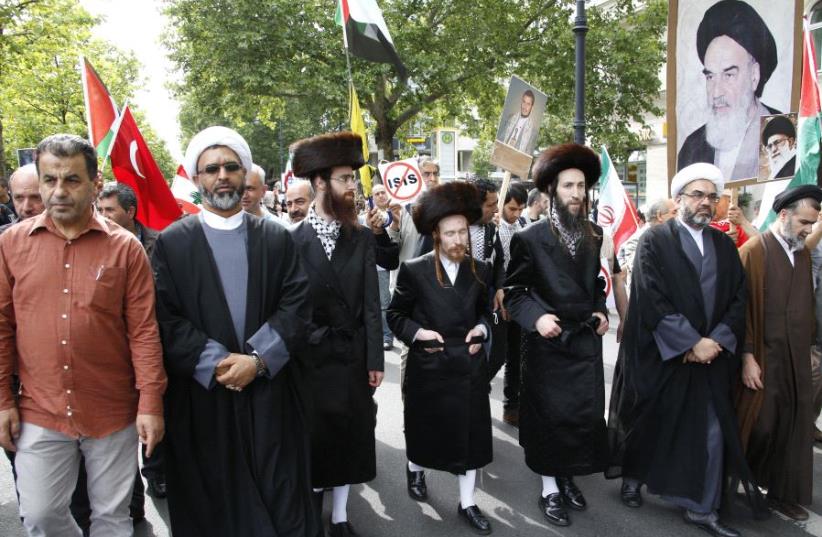 Muslim clerics and anti-Zionist orthodox Jews walk together during the annual al-Quds Day march in Berlin, Germany, July 11, 2015
(photo credit: REUTERS/FABRIZIO BENSCH)
Advertisement
The British government is considering whether to cancel an upcoming, large-scale Palestinian event in London due to concerns over support for the terrorist group Hamas, British media reported on Monday.Palestinian Expo, which is scheduled to begin on the weekend of July 8-9 at the QE2 center, is billed as a cultural festival featuring  political discussions, concerts, comedy acts, workshops, a food court and other events.The event is expected to draw an estimated 10,000 participants. But British Secretary of State for the Department for Communities and Local Government, Sajid Javid, is now weighing whether to allow the event to take place.Last week, Javid's sent a letter to FOA citing “concerns that your organization and those connected with it have expressed public support for a proscribed organization, namely Hamas, and that you have supported events at which Hamas and Hezbollah – also proscribed – have been praised.”The QE2 center, located just minutes away from parliament, is under the auspices of Javid's office and subject to its authority. FOA organizers responded swiftly to the accusations, writing to the department a letter of protest, claiming that the government's "unfair and unjust" considerations are insufficient in wanting to halt the event.Ismail Patel, founder of Friends of Al-Aqsa, later told The Guardian newspaper that the government has "failed to provide any satisfactory reason as to why they have chosen to cancel an event which seeks to celebrate Palestinian culture and heritage.” Patel is closely linked to several Islamic organizations and has openly expressed support for Hamas in the past, calling the group "no terrorist organization," according to The Jewish Chronicle. Javid was expected to make a decision last Friday, but an announcement was delayed following the Grenfell Tower fire which claimed the lives of 79 people. Organizers claimed that they have already sold 2000 ticket at £20 ($25.50) each, but sales have slowed to a trickle over the last few days since the government placed doubt over the event taking place, according to The Guardian. The Palestinian Expo comes just weeks after the controversial Al-Quds Day march was allowed to take place in London on June 18, where hundreds of participants waved flags and shouted cries of “end the occupation” and “Boycott Israel.”The crowd – made up of local Muslims, ultra-Orthodox Jews belonging to the anti-Zionist Naturei Karta sect and left-wing activists – marched down the road, carrying signs and banners accusing Israel of genocide and ethnic cleansing, all under the watchful eyes of scores of police officers.