During Israel's 2014 Gaza war, Khan had tweeted an article containing the headline: “The Israeli government are acting like Nazi’s." 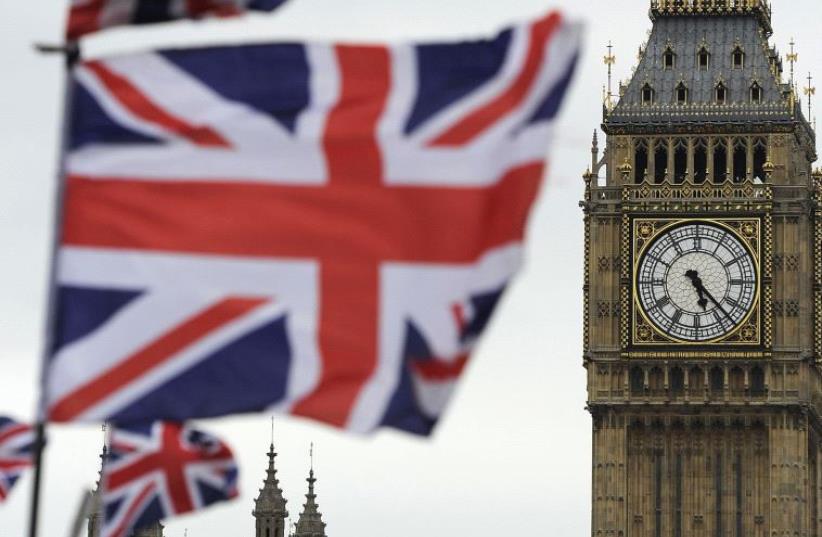 Flags are seen above a souvenir kiosk near Big Ben clock at the Houses of Parliament in central London
(photo credit: REUTERS)
Advertisement
A potential replacement for a UK Labour parliamentarian claimed Thursday that he is the focus of a smear campaign after it was discovered he previously compared Israel to the Nazis, according to The Jewish Chronicle.Afzal Khan, British Member of the European Parliament, announced that he intends to fill the seat vacated by former UK Labour lawmaker Sir Gerald Kaufman after the latter's death earlier this month.In the summer of 2014, during Israel's 50-day war with the Islamic terror organization Hamas, Khan had tweeted an article containing the headline: “The Israeli government are acting like Nazi’s [sic] in Gaza.”When approached with the issue by The Jewish Chronicle, Khan told the London based daily that the tweet did not equate to an endorsement of the statement, and claimed his name was being tarnished for political purposes.“I have long since deleted this tweet and when this issue was raised with me last year I apologized for any offense caused,” Khan said.Khan has been public in his support of Palestinian rights, signing up in 2014 to a five-point policy pledge of anti-Israel measures promoted by Labour Friends of Palestine, according to The Jewish Chronicle.Khan cited, however, his previous work as a UK solicitor in the fight against antisemitism, and noted that he founded and previously co-chaired the interfaith organization Muslim Jewish Forum of Greater Manchester."As an MEP I have continued this work as a member of the parliamentary intergroup against antisemitism. I will continue working to fight racism in all its forms, now and in the future,” he added. The Labour party is scheduled to make its candidate decision next week, with several other contenders vying for the position.Elaina Cohen, a Jewish parliamentary adviser to a Labour MP, also intends to stand for Manchester’s Gorton constituency, The Jewish Chronicle noted.