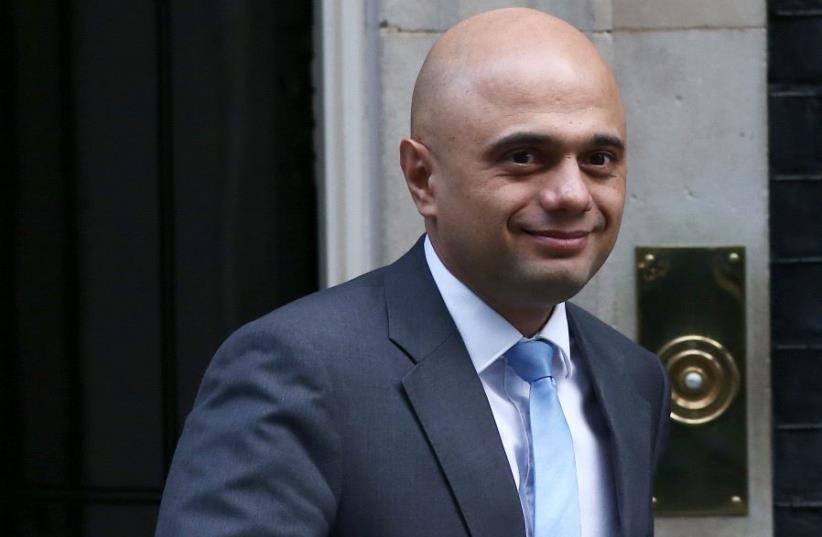 Britain's Secretary of State for local government Sajid Javid leaves a cabinet meeting in Downing Street, London, January 17, 2017. REUTERS/Neil Hall
(photo credit: REUTERS/NEIL HALL)
Advertisement
A future Jeremy Corbyn-led Labor government in Britain "would boycott Israel," Conservative Party minister Sajid Javid predicted on Sunday.According to a report in the Jewish Chronicle, Communities Secretary Sajid Javid made the claims during a public event hosted by the Board of Deputies of British Jews and the Jewish Chronicle in the run up to the United Kingdom's general election next month.Sir Keir Starmer, shadow Brexit Secretary who represented the Labor Party at the event, was accused by Javid of misleading the audience when questioned on his party's position on Israel under leader Jeremy Corbyn. Starmer was challenged after stating that "the Labor Party is against boycotts - and I am against boycotts." Javid responded that "it is just not right when you say the Labor Party does not support boycotts of Israel. If they were ever near power they would boycott Israel."Corbyn has been a vocal advocate for Palestinian rights for many years as a member of parliament and is a patron of the UK Palestine Solidarity Campaign. In August 2016, Corbyn expressed his support for “targeted boycotts aimed at undermining the existence of illegal settlements in the West Bank.” Since his election as leader of the Labor Party, Corbyn has had an uneasy relationship with the British Jewish community. He has been criticized for failing to adequately tackle antisemitism in the Labor Party, both by the local Jewish community but also by an October 2016 cross-party report that charged the party leader with a "lack of consistent leadership on this issue."According to recent polls, it looks unlikely that Corbyn will be granted the opportunity to implement such a boycott, with surveys showing a significant lead for the governing Conservative Party, lead by Prime Minister Theresa May.