Megan Dunn and her vice president, Richard Brooks, decided to ignore the NUS boycott of Coca-Cola by accepting its financial backing for an NUS awards ceremony. 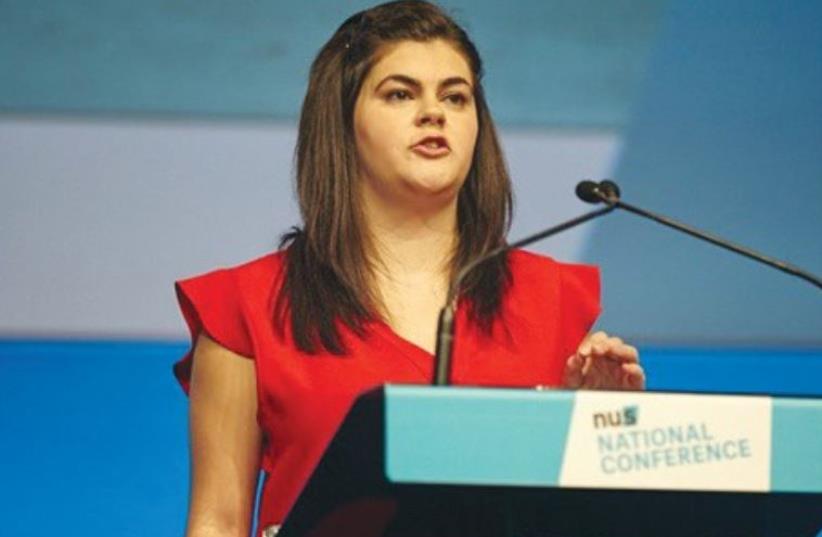 MEGAN DUNN
(photo credit: NATIONAL UNION OF STUDENTS)
Advertisement
LONDON – In a week when British Premier David Cameron has singled out the National Union of Students for some of its policies failing to contribute to tackling extremism, further evidence of the union’s leftward drift emerged when its national executive committee censured its president for accepting a sponsorship deal with Coca-Cola when the NUS policy is to boycott the company’s products.Megan Dunn, who was elected NUS president in April, and her vice president, Richard Brooks, decided to ignore the NUS boycott of Coca-Cola by accepting its financial backing for an NUS awards ceremony.Dunn, who confessed on her Twitter account to being a “drinker of Diet Coke,” found herself dragged into a controversy when hard-line colleagues on her executive pushed through their censure motion by 20 votes in favor to 14 against, with two abstentions, last week.While some constituent students unions refuse to have anything to do with the Coca-Cola because of a decision of the NUS’s Ethical Investments Committee to boycott the company over other unrelated issues – the NUS itself having endorsed the original reasoning in August 2014 – its executive agreed to boycott companies with links to Israel following its endorsement of BDS policy, also in August 2014 and reconfirmed in June.Under the terms of the BDS policy, the NUS is committed to ensuring that, as far as is practical, “NUS does not employ or work with companies identified as facilitating Israel’s military capacity, human rights abuses or illegal settlement activity, and to actively work to cut ties with those that do.”This, despite an appeal by 150 student leaders in a move coordinated by the Union of Jewish Students, calling on the executive “to reject motions to boycott Coca-Cola,” coupled with a warning that the executive “instead of seeking to improve student’s lives,” is introducing a boycott motion “which seeks to play politics and undermine the national president.” A further new motion demanding the NUS “cut all ties” with Coke was agreed upon, 19 in favor, with 14 against and one abstention, though this has yet to be fully implemented.The pro-boycott group within the NUS explained that the Central Bottling Company Ltd., which operates the Coca-Cola Israel franchise from production to distribution, operates factories in “the illegal Israeli settlements of Atarot, Shadmot, and in the occupied Syrian Golan Heights.”The group added that there was a clear, direct line of accountability whereby Coca-Cola, through its Israeli operations, was not only active within “illegally occupied territory,” but also in the process keeping occupation a viable exercise for the Israeli state. “The responsibility thus lies on NUS to implement its policy and break ties with the company until it at the very least ends complicity in the Israeli occupation.”Despite Dunn being backed by officials from 50 students unions who wrote a letter demanding that the NUS executive ignore the censure calls, the NUS voted to censure her rather than vote for a motion of no-confidence which would have forced her resignation. It has also demanded a public apology.Malia Bouattia, the NUS Black Students’ Officer, noted that the BDS issue had already been voted on twice, adding that the saga reflected “very poorly on NUS as an organization” in “exposing a democratic deficit” where the president sees fit to overrule policy and put “profit over principle.”Meanwhile Union of Jewish Students official Russell Langer tweeted that “Cases like this further Jewish students’ concern that BDS policies can be implemented in ways that would discriminate against them.”Coca-Cola has declined to comment.