The display on Zionism, which defined the concept as “the liberation movement of the Jewish people”, was the one that was ultimately approved. 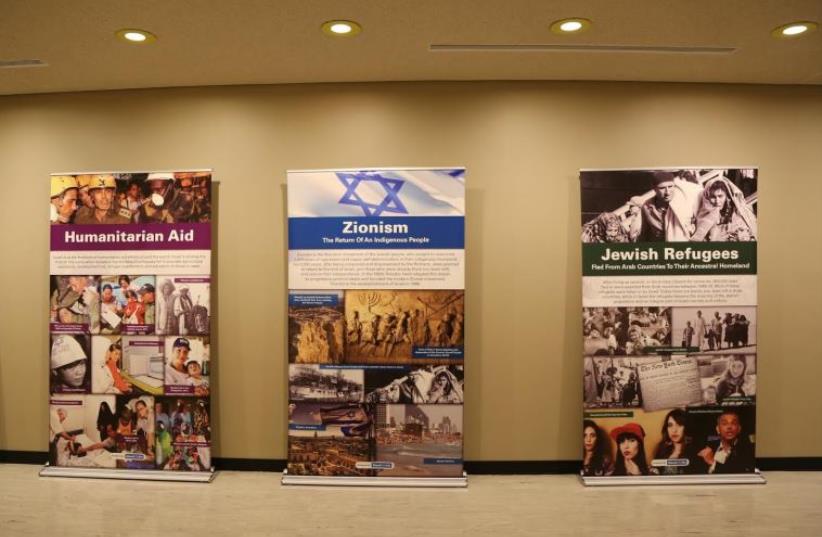 Special exhibition initiated by Israel’s permanent mission to the United Nations.
(photo credit: Courtesy)
Advertisement
NEW YORK - The United Nations reversed its decision to censor one of the three displays that it had originally disqualified from a special exhibition initiated by Israel’s permanent mission to the United Nations with the organization StandWithUs on Monday. The display on Zionism, which defined the concept as “the liberation movement of the Jewish people”, was the one that was ultimately approved. The two other posters, on Jerusalem as the capital of the Jewish People and on Israeli Arabs, remained censored by the UN.Israel’s Ambassador to the international body Danny Danon had called on Secretary General Ban Ki-Moon on Sunday to reverse the decision and to “apologize to the Jewish people.” “By disqualifying an exhibition about Zionism the UN is undermining the very existence of the State of Israel as the homeland of the Jewish people,” he said on Sunday.Danon welcomed Monday’s decision to finally allow the panel on Zionism and said it is “a clear win for Israeli diplomacy and a victory for the truth about Israel” but that the UN must now reverse its decision to censor the other two elements and allow all the panels to be exhibited.Spokesman for Secretary-General Stephane Dujarric told The Jerusalem Post that the panel on Zionism had never been disallowed from the exhibit. “There was a misunderstanding because there was a question about a photo in that panel, and so it was initially communicated to the [Israeli] Mission that the panel could not be displayed,” he explained. “That was immediately revised and it was then clearly communicated to the [Israeli] Mission shortly after the first message that the panel could be displayed.”As a general rule, Dujarric further told the Post, the aim is of the exhibits put together in the UN’s public hall is to allow member states to showcase cultural and/or social achievements, as well as their history. “The displays need to be in conformity with the purposes and principles of the Organization,” he said. “We are the custodians of this space and so it falls to us to make the call of whether proposed exhibits are in such conformity.” Regarding the panel about Jerusalem as the capital of the Jewish people, the spokesman explained that displays should be in line with international legality, which is why it was banned. “We also try to the best of our ability to keep these spaces free from polemics,” he added. “This is not an exact science, as we’re dealing with understandable sensitivities.”“One must also keep in mind that we’re dealing with 193 member States, who all have to feel that this is their house,” Dujarric pointed out. “We regularly look at this process to see how it can best serve all the member States.”The Spokesman also told the Post that there have been multiple past instances where the UN asked member States to adjust exhibits. “This is not unprecedented,” he said. The Israeli exhibition opened in the UN’s public hall on Monday.