“History will remember Peres for his tireless commitment, dedication and contributions to a secure Jewish state of Israel living in peace with its neighbors.” 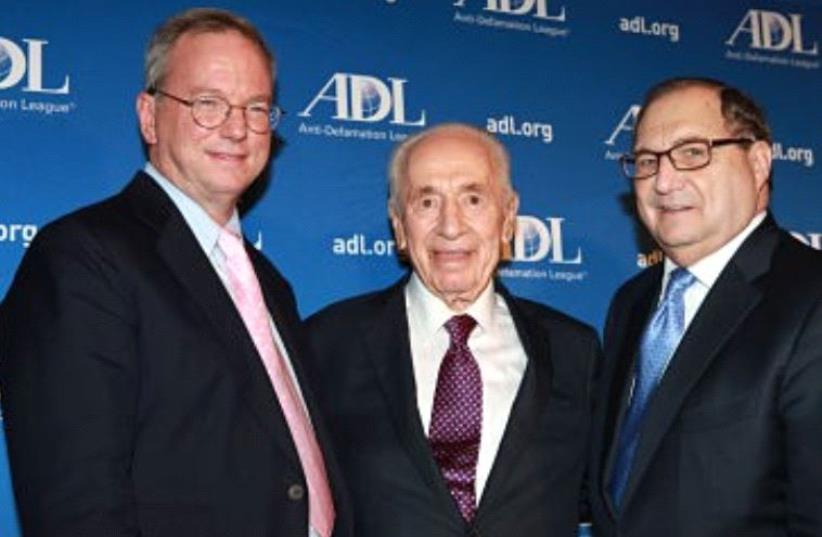 Former ADL national director Abraham H. Foxman presented two of ADL's top awards to Shimon Peres, the ninth president of the State of Israel, and Eric Schmidt, former executive chairman of Google.
(photo credit: ADL)
Advertisement
NEW YORK - American Jewish organizations came together on Wednesday in mourning former Israeli president Shimon Peres who passed away at the age of 93, and praising his contribution to the State of Israel.“History will remember Peres for his tireless commitment, dedication and contributions to a secure Jewish state of Israel living in peace with its neighbors,” the Anti-Defamation League wrote in a statement moments after the announcement. “We will deeply miss his clarion voice, statesmanship and wisdom.”In September 2014, ADL honored Peres with its Distinguished Statesman Award in honor of his “remarkable career in service to Israel and the Jewish people.”The American Jewish Committee too paid its respects to the Israeli founding father whose life, the organization wrote, “was virtually synonymous with the history of the State of Israel” and who will “forever be remembered as one of the great visionary leaders of the Jewish people.”“Peres had extraordinary energy, boundless optimism, and future-oriented vision, not only about the possibilities of peace and coexistence in the region, but also about the exciting pathways of new technologies for the benefit of humankind—from nanoscience to mapping the brain,” AJC CEO David Harris pointed out.Harris also noted Peres’s close relationship with AJC leaders, whom he often met with over the years both in Israel and the U.S. Peres addressed AJC meetings on a number of occasions, notably AJC’s 2001 Annual Meeting in Washington, D.C., where he shared the platform with President George W. Bush, Mexican President Vincente Fox, and German Foreign Minister Joschka Fisher.The organization J Street, which advocates for the two-state solution, described Peres as “an ethical beacon and a voice of optimism for Israel” who remained “unbowed and undeterred.”J Street described Peres, the last surviving member of Israel’s founding generation of leaders, as “originally a security hawk” who later found a “more healthy path”.“Over the course of his long and productive life, Shimon Peres epitomized the best of Israel and of the Zionist movement,” they said. “He was a fighter turned peacemaker, a hawk turned dove, a fierce political fighter turned unifier. We shall not see his like again.”The group added that “He will be remembered for his tireless efforts to keep Israel safe and in his latter years to reach a just peace with the Palestinians based on a two-state solution.”“He was a friend of J Street, always ready to meet with our leaders and supporters, who will be sorely missed.”The UJA Jewish Federation of New York also expressed it’s sorrow on behalf of the Jewish community in the city and pointed out that he “contributed greatly to the deepening of relations between the United States and Israel, and has cultivated a special relationship with the New York Jewish community.”