“We again extend our condolences to the families of those who perished and our prayers for those injured in this brutal attack as well as the victims of the Charlie Hebdo ." 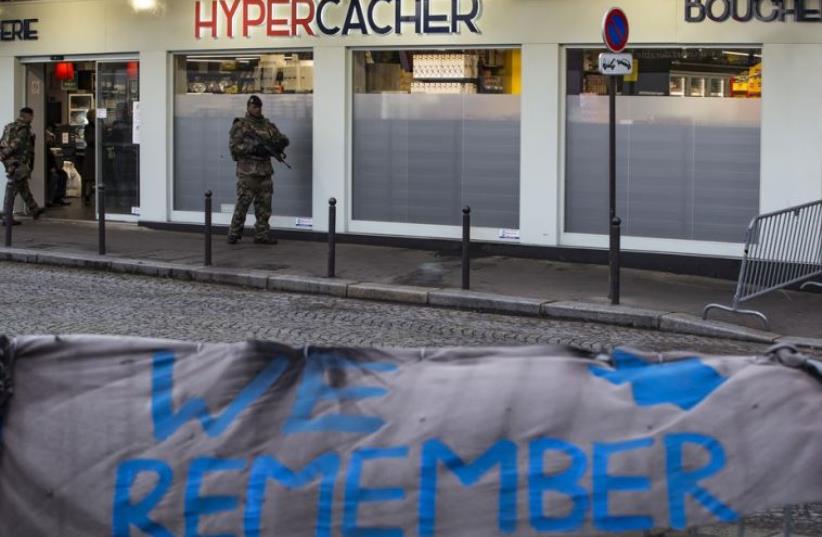 A French soldier patrols outside the Hypercacher kosher supermarket in Paris
(photo credit: REUTERS)
Advertisement
NEW YORK – Speaking on behalf of American Jewish leaders at the Paris commemoration of the Hyper Cacher attack on Sunday, the executive CEO of the Conference of Presidents of Major American Jewish Organizations expressed solidarity with French Jews.“We again extend our condolences to the families of those who perished and our prayers for those injured in this brutal attack as well as the victims of the Charlie Hebdo and more recent terror assaults,” Malcolm Hoenlein said.
France pays tribute to 2015 terrorism victims
“The courage and determination of French Jewry and its leadership has been inspiring,” Hoenlein added. “We all recognize that this scourge of terrorism and the spread of the extremist ideologies behind it are far from over. Their terrible network of death and destruction continues to spread around the globe taking countless lives of people of all faiths.”He also stated that “it is imperative that all those who extol life, who share the common values and principles, which we cherish, must stand up with clarity and determination against these evil forces and their enablers.”Hoenlein added that, “while France has suffered numerous terror attacks, this one targeted a specific segment of the population because of their religion,” and noted that the phrase ‘Never Again” is “a pledge each generation must take anew to assure that no Jews, Jewish communities nor the Jewish state, ever be alone, be subjected to discriminatory practices, be put at risk for their religious beliefs or affiliation.”