Shlomo Rechnitz, a health care magnate who owns 80 assisted living facilities throughout California, purchased nearly 18,000 lottery tickets for all of his employees. 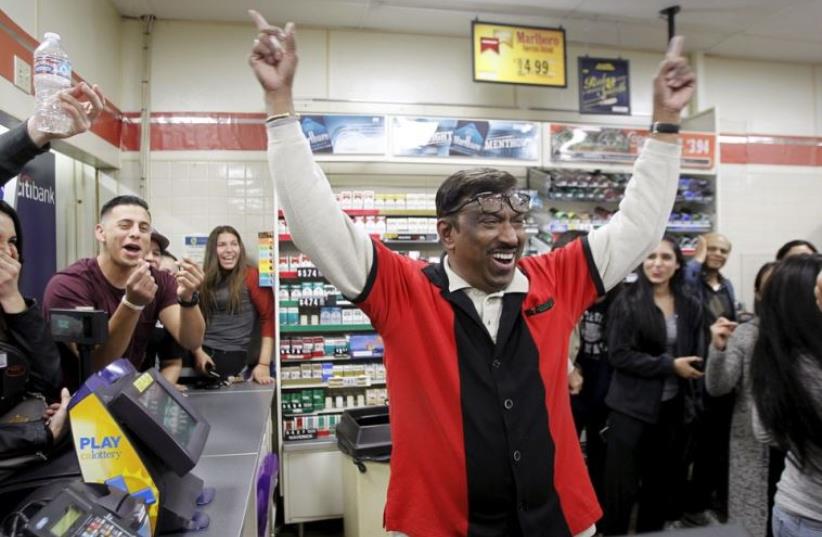 7-Eleven store clerk M. Faroqui celebrates after selling a winning Powerball ticket in Chino Hills, California
(photo credit: REUTERS)
Advertisement
An American Jewish philanthropist purchased nearly 18,000 lottery tickets for the record-breaking Powerball drawing.Shlomo Rechnitz, a health care magnate who owns 80 assisted living facilities throughout California, purchased nearly 18,000 lottery tickets for all of his employees.The unprecedented $1.6 billion Powerball jackpot will be divided among three winning tickets purchased in Tennessee, California and Florida.Each ticket is worth $528.8 million, lottery officials said in California, one of 44 states plus Washington D.C. and two US territories that sold millions of Powerball tickets.The winning numbers were 08 27 34 04 19 and Powerball 10, picked in a drawing on Wednesday night. The odds of having the correct numbers: 1 in 292 million.There were indications earlier Thursday that the winner from California was a registered nurse at the Park Avenue Healthcare and Wellness Center in the town of Pomona, about 30 miles east of Los Angeles. The center is operated and owned by Rechnitz.But the nurse's daughter later told The Los Angeles Times that her mother was not the winner and that the entire episode was a misunderstanding.Nonetheless, Rechnitz made sure to give all of his employees throughout California an opportunity to go for the jackpot. In areas where there were no 24-hour convenience stores, he offered local mini-marts cash on an hourly basis in order to stay open so as to enable his workers a chance to buy the lotto ticket.Each ticket that Rechnitz purchased was attached to a card on which he wrote: “We will provide the ticket. You provide the dream.”“I asked Shlomo what spurred him to do this in the first place,” Nass told the Post. “He said, ‘In the new year, everyone wants an extra bit of hope’ and he wanted to give everyone that bit of hope.”The other two winning tickets were sold in Munford, Tennessee, and Melbourne Beach, Florida, lottery officials in those states said.Crowds descended on the California store that sold a winning ticket, with customers snapping pictures and congratulating the sales associate. The store will receive a $1,000,000 bonus, lottery officials said.