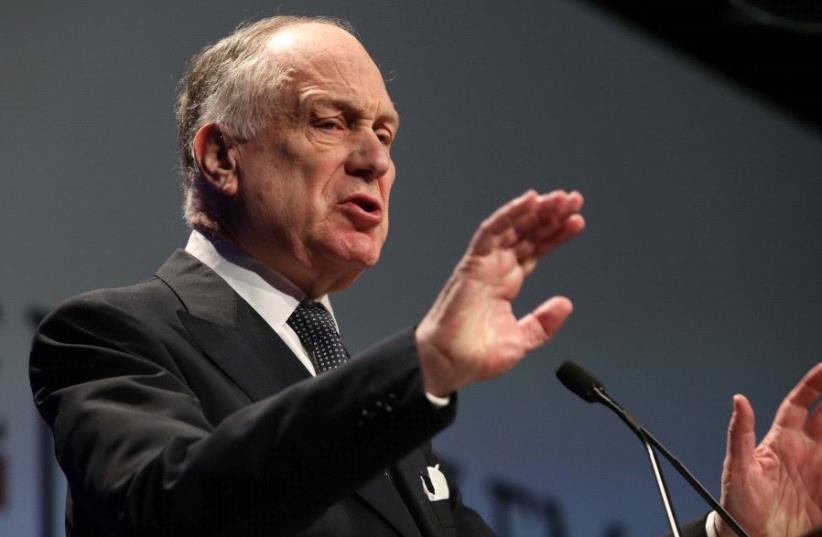 Ron Lauder at the JPost Annual Conference 2017
(photo credit: SIVAN FARAG)
Advertisement
Leaders of US Jewry condemned the controversial comments about US Jews made by Deputy Foreign Minister Tzipi Hotovely on Wednesday, and called for greater unity among the Jewish people.President of the World Jewish Congress Ronald Lauder decried Hotovely’s remarks that US Jews are “people that never send their children to fight for their country” and that “most of them are having quite convenient lives.”“It is unacceptable for any Israeli official to be disrespectful of the Jewish people living in the Diaspora,” Lauder said on Thursday. “Israel is the homeland of Jews throughout the world, and its central mission is to preserve and strengthen the Jewish people, all Jewish people wherever they may be. Just as the Jewish Diaspora stands by the Jewish state, the Jewish state must stand by the Jewish Diaspora.”Lauder commended President Reuven Rivlin’s call earlier in the day for “a renewed alliance, for a common language, between Israel and the Diaspora, before it is too late.”“For the past several years, I have watched with growing alarm as the divisiveness between Israel and the rest of the Jewish world deepens,” Lauder said. “I fervently hope that we can all work together and resolve these issues in the interest of Jewish unity and in a spirit of mutual tolerance and understanding.”Deputy Foreign Minister Tzipi Hotovely pictured at Columbia University. (photo credit: Courtesy)President of the Jewish Federations of North America Jerry Silverman also expressed disappointment.
Hotovely: US Jews lead ‘convenient’ lives, don’t serve in the military (i24 News)
“Now is a time for bridge building and dialogue between Israel and world Jewry,” Silverman said. “We were disappointed in Deputy Minister’s Hotovely’s comments, which only widen the gap of understanding between our people.”Prime Minister Benjamin Netanyahu’s public reproach of Hotovely was welcomed by US Jewish groups.“We appreciate the prime minister’s statement rejecting the deputy minister’s comments,” Silverman said. “We must all remember and embrace the concept that ‘all Jews have responsibility for one another.’” The American Jewish Committee expressed a similar sentiment, retweeting a condemnation of Hotovely’s remarks from the Twitter account of the prime minister alongside the remark that it was “a welcome and important statement.”Michal Berman, CEO of Panim, an Israeli network of 60 pluralistic Jewish organizations, said: “It’s sad to find that the person who fills the role of [deputy] foreign minister of Israel – who is supposed to promote the image of the state of Israel in the world – is disparaging the largest and most powerful Jewish community in the world. The US Jewish community focuses much of its time, resources and energy for the benefit of Israel, and that includes sending the best of their sons to fight here and to serve the country and sometimes even to pay with their lives. If Hotovely does not understand this, she cannot fill her role for the good of the State of Israel.”Meanwhile President of the Union for Reform Judaism Rabbi Rick Jacobs joined a growing chorus of voices calling for Netanyahu to fire Hotovely.“The Deputy Foreign Minister has a right to her ill-informed and insulting views. But such views disqualify her holding such an important role in Israel’s diplomatic corps. Her comments serve to underscore how the Israeli government disdains the majority of North American Jews,” he said. “We note with appreciation the Prime Minister’s statement criticizing Hotovely’s words. As always, the Prime Minister finds the right words. This moment, however, demands action and not simply words. He needs to dismiss Hotovely immediately.“Further, even as we acknowledge the Prime Minister’s statement, we respectfully suggest that what he says to us and the English-speaking media is far less important than what he says to his haredi partners. For too long he has allowed them to hijack Israeli interests. That can and should end today,” Jacobs added.