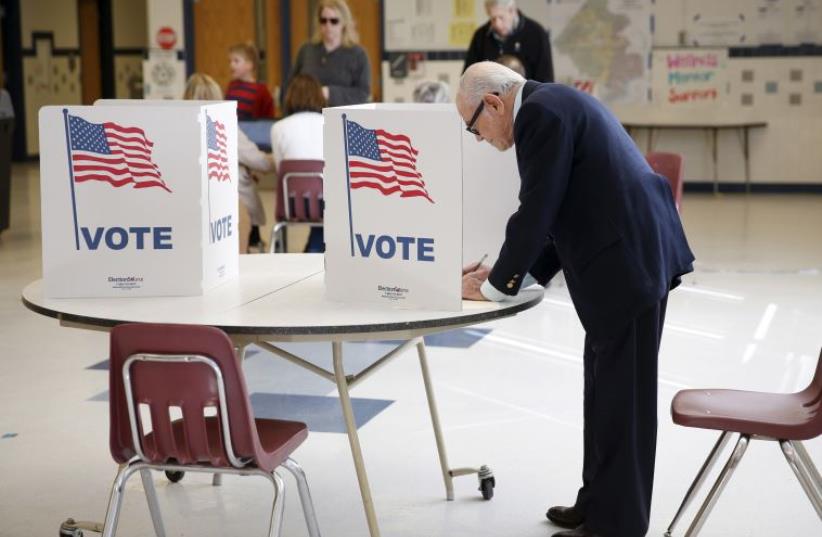 A voter fills out his ballot at Sleepy Hollow Elementary School in Falls Church, Virginia.
(photo credit: KEVIN LAMARQUE/REUTERS)
Advertisement
The Religious Action Center of Reform Judaism (RAC) will launch a nonpartisan initiative next week to protect voting rights and promote voter participation across the US.The Washington-based group, which is committed to racial justice, is partnering with the National Association for the Advancement of Colored People (NAACP), the Lawyers’ Committee for Civil Rights Under Law and the PICO National Network, among others, under the banner Nitzavim: Standing up for Voter Protection and Participation.“Since 2013 we’ve seen an incredible rush to pass racist voter-suppression laws to discriminate against voters of color,” RAC director Rabbi Jonah Pesner told The Jerusalem Post. “We were founded as a Jewish organization focused on civil rights, and we feel pained by what we see on the ground,” he said, also mentioning the disparity in the number of black and white Americans in jail.The campaign will kick off August 18, in Raleigh, North Carolina, a state where organizers say there is documented voter suppression.They do note, however, that a federal appeals court recently struck down a North Carolina law requiring voters to show photo identification when casting ballots, ruling that the law intentionally discriminated against African- Americans.North Carolina is politically important since it does not lean heavily toward either Democrats or Republicans, and Democratic presidential nominee Hillary Clinton is heavily favored among black Americans over Republican nominee Donald Trump.The court’s decision also canceled provisions of the law that scaled back early voting; prevented residents from registering and voting on the same day; and eliminated the ability of voters to vote outside their assigned precinct.Critics argue that such provisions are designed to drive down turnout by minorities and poor people who rely more on flexible voting methods and are less likely to possess state-issued photo IDs.Proponents of such laws say they aim to eliminate voter fraud.“We know this election will have incredible outcomes for the civil-rights movement in America. It’s so important that they can vote. We want to make sure millions of votes count in this election,” Pesner said.The Civil Rights Act of 1964 and the Voting Rights Act of 1965, he noted, were both drafted in the conference room of the RAC’s building in Washington, DC.“Fast forward almost a jubilee, and in 2013, the Supreme Court ruling in Shelby County v. Holder, eviscerated the Act of pre-clearance,” ruling in favor of officials from Shelby County, Alabama, by declaring unconstitutional a section of the law that set the formula that decides which states and locales with a history of racial discrimination need federal approval to change voting laws.According to the RAC, following the court decision, many states have tested the extent to which they can legally limit citizens’ access to the ballot box by introducing – and in many cases passing – restrictive voting laws. Pesner expressed hope that following the presidential elections, the Supreme Court will revisit and repair the decision.“We didn’t start marching for civil rights 50 years ago, we started 5,000 years ago when we marched out of Egypt. And we will continue marching for any oppressed group, for another 5,000 years if necessary,” Pesner said.President of NAACP’s North Carolina chapter William Barber II, who recently addressed the Democratic National Convention, is scheduled to attend the launch event at Raleigh’s Temple Beth Or.The RAC plans to recruit at least 100 Reform congregations and 100 lawyers to the cause, and volunteers will tour the country to areas in particular need of support on the issue.