"We would like a cancellation," said the mayor's spokesman when asked about the BDS activities in the city-subsidized Amerlinghaus building. 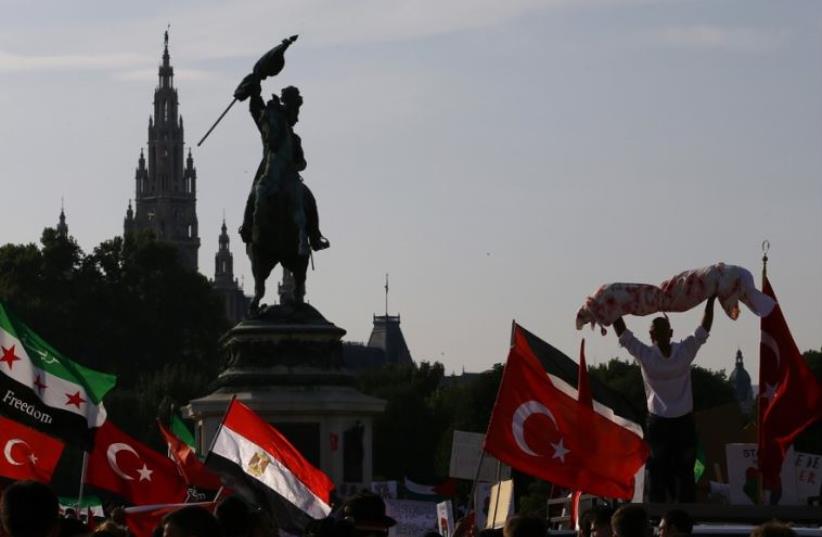 Pro-Palestinian demonstrators protest the 2014 Gaza operation in Vienna
(photo credit: REUTERS)
Advertisement
The city of Vienna seeks to pull the plug on the Boycott, Divestment, and Sanctions (BDS) events in early March in a municipal-funded building, a spokesperson for the mayor told The Jerusalem Post on Friday.“We would like a cancellation," said the spokesman, Martin Ritzmaier, when asked about the BDS activities in the city-subsidized Amerlinghaus building.He added that the city of Vienna has contacted the management of the Amerlinghaus cultural center to urge a cancellation of the BDS activities.“The city of Vienna rejects boycott calls against the State of Israel and the association BDS-Austria receives no funding from the city of Vienna,” said Ritzmaier. Vienna’s mayor is the Social Democrat Michael Häupl.According to a 2014 report in the newspaper Heute.at, the Amerlinghaus received 113,000 euros ($123,429) from the city of Vienna.Vienna's Jewish community, which has over 7,000 members, has banded together with a coalition of civil society groups fighting anti-Semitism that are slated to hold a rally against BDS-Austria events in March. The rally is titled “Against the anti-Semitic masquerade of ‘Israeli Apartheid Week.”’ The group’s website is titled “Boycott anti-Semitism.”The organizers of the rally said that BDS Austria aims to “delegitimize the Jewish state.” In an email to the Post,  Stefan Schaden, a board member of the Austrian-Israeli Society, wrote: "BDS has an appalling record of perpetuating old anti-Semitic stereotypes by projecting them onto the Jewish state. Our society therefore supports the broad coalition of civil society organizations that came together to stand up against any form of anti-Semitism."Two events organized by BDS-Austria are scheduled to take place in the second week of March as part of the fringe anti-Israel “Apartheid Week” activities.The BDS-Austria event in the Amerlinghaus is titled “Dismantle Colonialism and Oppression within the Israeli Apartheid System.” The posting on the Amerlinghaus website states that the freelance Israeli translator Ofer Neiman, who lives in west Jerusalem, will speak about the Israeli BDS campaign “Boycott from Within.”A second BDS-Austria event is a cooperation project with the group Women in Black in Austria to show the Israeli documentary film The Law in These Parts. According to the film’s website, the films addresses the question: “Can such an occupation be achieved within a legal framework that includes genuine adherence to the principles of the rule law?”Women in Black in Austria advocate a breaking of Israel’s naval blockade of the Hamas-ruled Gaza Strip. The UN declared Israel’s blockade legal to prevent arms shipments to the EU and US-designated terrorist entity Hamas.Lisa Grösel, a spokeswoman for the Amerlinghaus, told the Post that the “cultural center is anti-fascist and anti-racist, in which there is no place for anti-Semitism.”She said “anti-Semitism is in no way an opinion, rather a deeply racist position.”Pressed to answer if the Amerlinghaus views BDS as anti-Semitic, Grösel refused to respond.The Simon Wiesenthal Center termed BDS “an anti-Semitic, anti-peace poison pill” in its 2013 report on the group.  Samuel Laster, an Israeli-born journalist who is editor-in-chief of the Vienna-based news website The Jewish, told the Post the BDS-Austria group will “attack Israel in the Armerlinghaus in an old anti-Semitic connotation: ‘Don’t buy from Jews!’ it was called in 1938. Today in 2016 it is called: Boycott Israel.” BDS-Austria did not immediately respond to a Post query. A spokeswoman for the president of the Austrian parliament informed The Jerusalem Post on Sunday that an event slated to honor Hedy Epstein - an anti-Zionist Jew, pro-BDS activist, and defender of Hamas - has been canceled. "In consideration for the concerns against some of the participants, the Austrian parliament has cancelled the event 'In Grandmother’s Words...The Fate of Women in the Second World War,'" said spokeswoman Marianne Lackner.