Tourists and locals tour the Jewish quarter of Le Marais in Paris, where they sample culinary delights and learn the history of Jews in France. 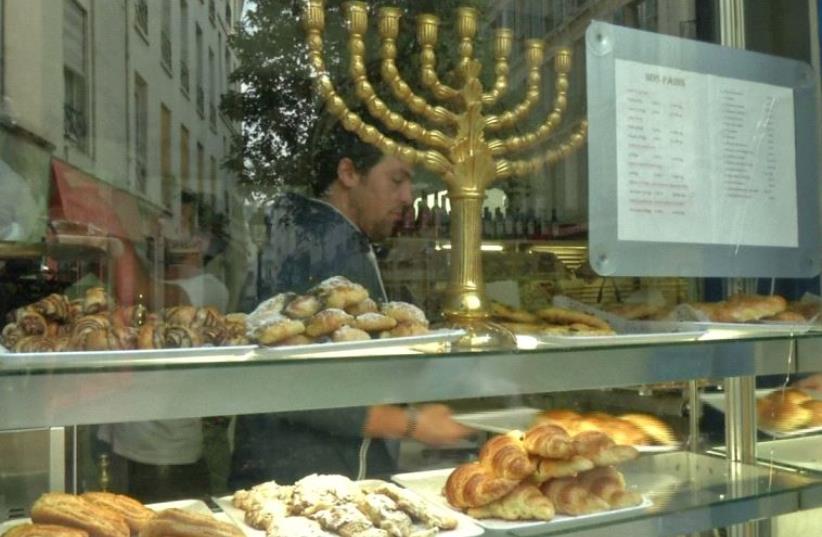 The Jewish quarter of Le Marais in Paris
(photo credit: screenshot)
Advertisement
The Marais district in Paris -- popular with tourists, gay couples and trendy dressers -- is also the cradle of Jewish culture in France.Jews first came to France as early as the fifth or sixth century, after the destruction of the Jewish temple in Jerusalem.The community in The Marais traces its roots back to the 13th century. They remained until Jews were expelled from France a century later, and re-established themselves, with Alsatian Jews the first to arrive in the 1880s.
A culinary tour of Paris"s Jewish quarter, where recipes are passed on through generations
Eastern European Jews fleeing pogroms in their countries arrived in waves until the 1930s, and opened synagogues and commercial establishments around Rue des Rosiers, calling it the Pletzl, meaning "small square" in Yiddish.Le Marais was decimated during the Holocaust, and more than half of its residents were killed in concentration camps.Elisabeth Kurztag, who runs tours of The Marais for the Museum of Jewish Art and History, comes from a Polish family who migrated to the district after the war. She recalled walking on the streets as a three-year old."Even after the Shoah (Holocaust), some Jews, among them my parents, came to live in this quarter, which was very poor, which was old, in ruins, unsanitary, very dirty - it was terrible. And actually this quarter was meant to be demolished," Kurztag said.Though many Jewish establishments on Rue des Rosiers have disappeared, there are still Jewish bakeries and kosher butcher shops, and Judaism-oriented bookstores, amid Israeli-owned falafel places, and fashionable boutiques.Parisian Jews are accustomed to buying challah bread for Sabbath dinner, and desserts like cheesecake and strudel.On the savory side, among the favorite delicacies passed on through generations of Ashkenazi Jews are the pastrami sandwich, herring, and gefilte fish."When you arrive in a foreign country, when you don't really know, you're still in the shadows, for instance, and you come across pastrami, Russian pickles, you feel, 'Yes, we can breathe a little bit. We are reassured,' we say to ourselves. 'We haven't lost everything. We've lost our land, but not our heritage," Kurztag said.The Yiddish bakery Florence Kahn sells traditional breads and pastries. The owner, whose parents migrated from Warsaw, said she teaches family recipes to her workers, who are not necessarily Jewish.More importantly, her products are done in a kosher way, following religious prescription."It was a little bit difficult for our ancestors, arriving in France and to practice this (Kosher) way of cooking. I think it has evolved a lot, with the products that we find in France, which are not necessarily the same as what we would find in Poland or Russia or Romania. But each person adapted, based on what's available locally. And everything now is kosher, for those who think it's important," she said.The tour participants, coming from different countries, said they were reminded of their own family's home cooking."All these foods are kind of a taste of my past, and I don't eat them much anymore. But they remind me of my grandmother. And I'm taking photographs for my mother, because she's going to laugh, because this is really, home cuisine. It's not 'La Grande Cuisine,'" said L.A. tourist, Irene Borger.Elian Mouyal, whose family came to France from North Africa, said gastronomy is integral to Jewish culture."I think, like all cuisines, it (Jewish gastronomy) is about families, friends coming together, and the pleasure of being together, of sharing, of giving, and passing it on also to the children, so that tradition lives on."The culinary tour of the Marais is part of a three-day gastronomy festival in Paris, from September 23-25.