In the video, the two men can be seen surrounded by numerous pro-Palestinian supporters and immediately begin speaking over one another in a heated exchange. 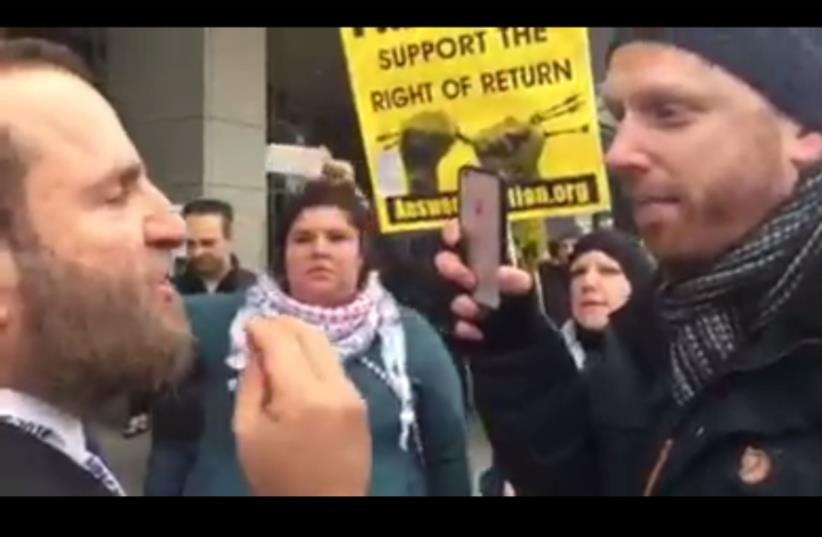 Confrontation between Rabbi Shmuley Boteach and Max Blumenthal outside AIPAC conference
(photo credit: RABBI SHMULEY BOTEACH FACEBOOK)
Advertisement
A video of a prominent American rabbi and an ardent anti-Israel activist squaring off in a shouting match surfaced on social media Sunday. The event took place outside the convention hall where the 2016 American-Israel Policy Affairs Committee (AIPAC) forum was being held.Rabbi Shmuely Boteach, a well-known rabbinical leader and frequent columnist  to The Jerusalem Post , was confronted by pro-Palestinian journalist Max Blumenthal, son of former Hillary Clinton confidant Sidney Blumenthal, outside the Washington DC Conference Center Sunday afternoon as the AIPAC convention was set to kick off.

In the video posted to Boteach's Facebook, the two men can be seen surrounded by numerous pro-Palestinian supporters led by Blumenthal, who immediately begin speaking over one another in a heated exchange.
"You said that Palestinians don't exist. You said that Palestinians don't exist," Blumenthal can be heard saying, as he holds up a phone recording the confrontation.
"The way you malign Jews is disgraceful," Boteach says in reply.At that point supporters from both sides begin to get involved, escalating already wrought tensions.Blumenthal continues by asking the rabbi: "Why did you lie about me in the New York Times?"Blumenthal was referring to a full page ad Boteach took out in the New York Times earlier this year that criticizes Hillary Clinton and her connection with "her anti-Israel advisors," Sidney and Max Blumenthal. The ad goes on to claim that the the younger Blumenthal "calls for the end of Jewish life in Israel" and  refers to Israelis as "Judeo-Nazis." Blumenthal denies the allegations.

Aipac plenary. Awaiting @HillaryClinton. Will she disavow @MaxBlumenthal and father said in wake of our @nytimes ad? pic.twitter.com/LXzX90sdLA

Seconds later supporters from both sides begin cursing and pushing one another.

I called racist Rabbi Shmuley on his defamation and corruption. He and his children called me an anti-Semite 1000x https://t.co/0GcDEkjnaT

"Don't ever put your hands on me," a woman can be seen shouting towards supporters of the rabbi.The video winds down to its conclusion as Boteach begins to walk away, telling Blumenthal to "stop your anti-Semitism, stop your Jew-hatred."Blumenthal replies that he does not "speak for Jewish people" but rather only for Sheldon Adelson, the billionaire casino mogul who Blumenthal contends is a financial supporter of the rabbi.
Advertisement
Hot Opinion