These Birthright participants from India took Jerusalem by surprise. 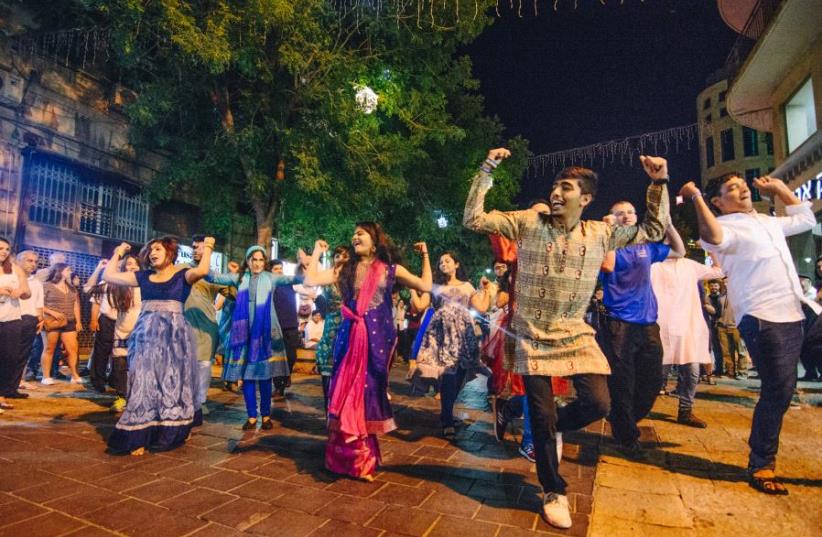 Leora Ruben, Mayan Sanlar, Avishai Mazgaonkar and Oved Gadkar bring a little Bollywood to Jerusalem as part of their Birthright trip from India.
(photo credit: ISRAEL EXPERIENCE)
Advertisement
Bollywood flash mobs are not a feature of your average Birthright group, but the annual Indian group that traveled to Israel this month made sure to share part of their culture with the locals, as well as soaking up Israeli culture and having meaningful first-time experiences of the Holy Land.Several members of this year’s group will be heading home this week having stayed on after the 10-day heritage trip ended two weeks ago, to spend time with relatives who live in Israel.
Birthright participants from India dancing the night away in Jerusalem. (Credit: Adam Saville)
The group’s 19 participants hail from various areas of India and were led by Leora Joseph, from Mumbai, who has worked for many years in the Indian-Jewish community and has watched most of the participants grow up. “It was like leading my kids to Israel,” Joseph told The Jerusalem Post on Thursday.While the group visited the usual touristic hot-spots which feature on every Birthright schedule, they had a few additions of particular interest to their community.During a preparatory meeting ahead of the trip in Mumbai, Joseph had revealed to the group that she is related to the famous Indian-Israeli Singer Liora Itzhak, who fuses Bollywood and Israeli culture in her music.The group, which included many singers and dancers, was keen to meet the celebrity.Joseph made a phone call to her cousin, who obligingly came to meet the participants during their visit to Israel, where she spoke with them, danced and sang a Hebrew-Hindi duet with one of the participants.The group also put on performances of their own. They arranged a Bollywood-inspired flash mob in Jerusalem’s bustling Ben-Yehuda Street as well as appearing on Channel 10’s morning show and performed a dance on air.India is home to an estimated 5,000 Jews, while 4,000 Indian Jews reside in Israel. Members of the latter, living in Ramle, hosted the group for lunch during their visit.Sisters Margalit, 22, and Sigalit Samuel, 23, of Ahmedabad, Gujarat, stayed on for over a week in Israel to visit their relatives across the country, from Haifa in the North to Ashdod in the South.They were particularly moved by their visit to Yad Vashem.“Every Jewish person should visit there at least once,” Margalit remarked, describing her visit to the museum as “very emotional.”Joseph told the Post that the participants had complained that they didn’t have enough time at Yad Vashem and had wanted to learn more. “I found that interesting because it’s a difficult subject to deal with and they were absorbing so much,” she said. “There is no history of antisemitism in India and we don’t know much about the Holocaust,” she explained, saying that Holocaust education is limited there.“We learn about it at school as part of WWII history but they (the students) don’t know the extent to which people suffered,” she added, though she noted than in recent years a Holocaust program has been launched, particularly in the Jewish community.The highlight of the trip for the majority of the group was visiting the Western Wall, finding the experience of Kabbalat Shabbat there extremely spiritual.“I got goosebumps,” Hebron Bamnolkar, 22, from Mumbai, told the Post.Bamnolkar said his experiences of Israel exceeded his expectations.He will remain in the country until the Maccabiah Games, in which he is competing in cricket.Afterward he will return home to complete his studies, but he hopes to the return to Israel for good with his mother.Joseph said the group became very tight-knit over the 10 days and felt like an intimate family.“I told them that it will be life changing and an experience of a lifetime – and that’s what it has been for them,” she said.