Tens of thousands of Israel supporters are taking part in the annual parade and festival. 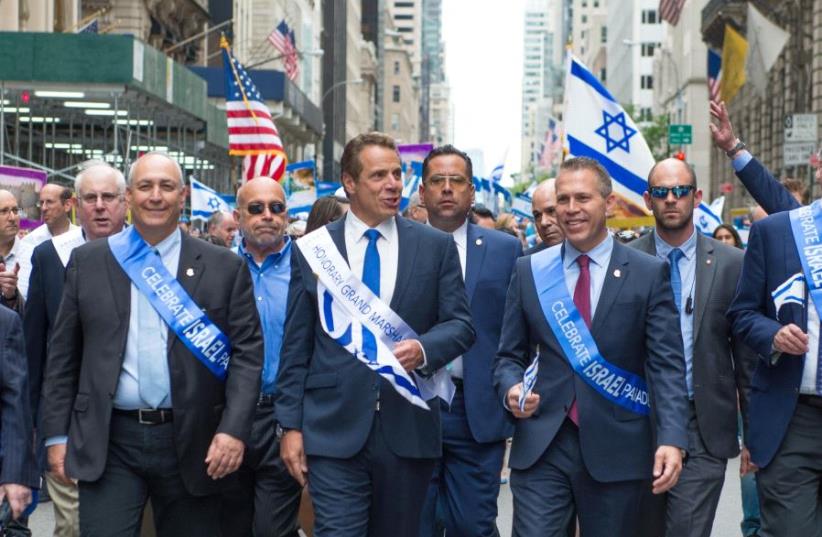 NY Governor Cuomo, Minister Gilad Erdan and Nehemia Peres at the Israel Day Parade 2017
(photo credit: ALEXI ROSENFELD)
Advertisement
Tens of thousands of Israel lovers are taking part in this year's annual "Celebrate Israel" parade in New York City. The parade, spearheaded by New York Governor Andrew Cuomo, Strategic Affairs Minister Gilad Erdan and Jerusalem Mayor Nir Barkat is marching up Manhattan’s Fifth Avenue from 57th to 74th Streets.
The theme of this year's parade is "Celebrate Israel All Together," a call for unity at a time that Israel has become a political edge issue in the US. The festival is also celebrating 50 years for the reunification of Jerusalem.
Participants are being accompanied by 11 marching bands and 10 live performance acts will be taking part in the festivities.
Nearly 30 floats representing groups like Nefesh B' Nefesh, Stand With Us and JNF as well as companies like El Al and Bank Leumi provide the parade's main attraction.
Nine Israeli members of Parliament, from across the political spectrum are taking part as are a long list of American public officials including New York Mayor Bill De Blasio and five members of US Congress.
Ministry of strategic affairs, headed by Erdan, launched today the 4il campaign. A new website (www.4il.org.il) is being launched with tools to combat lies and incitement against Israel online.