Now aged 50, Meili says he would do it all again despite the upheaval of exile from Switzerland's close-knit society, which traditionally values unity and conformity. 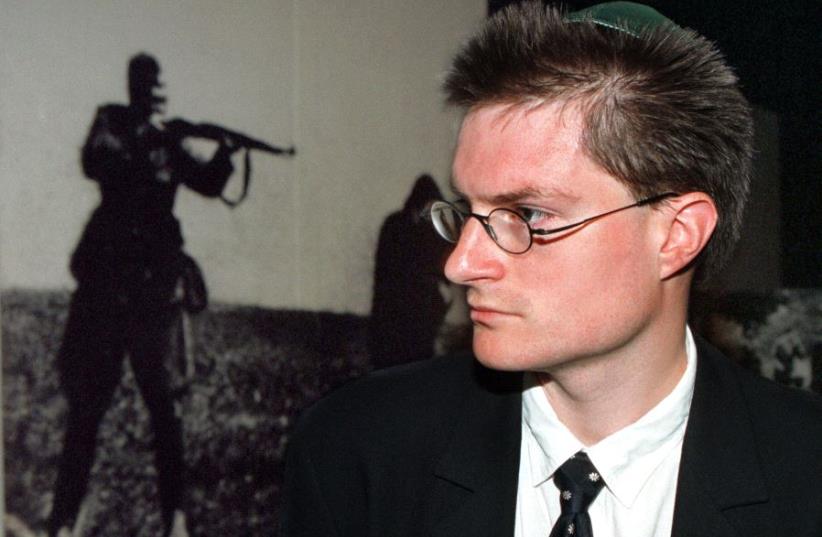 Christoph Meili, a former Swiss bank security guard, wears a yamulka as he passes a photo mural of a Nazi soldier executing a Jewish woman during a tour of the Yad Vashem Holocaust Museum in 1997.
(photo credit: REUTERS)
Advertisement
ZURICH - The Swiss night watchman who ignited a furore over Holocaust victims' missing wealth two decades ago is reliving how his dream of becoming a hero after the example of Oskar Schindler turned into a nightmare.Unlike Schindler, Christoph Meili saved no lives. But by leaking Swiss bank documents bound for the shredder, he helped Holocaust survivors and relatives of Jews murdered by Nazi Germany to win justice and recover more than a billion dollars.Meili's actions had a cost. His life remains marked by a media-driven ordeal that won him worldwide fame but forced him into temporary political asylum in the United States while touching off Switzerland's worst crisis since World War Two.Now aged 50, Meili says he would do it all again despite the upheaval of exile from Switzerland's close-knit society, which traditionally values unity and conformity. Since returning home nine years ago, he has chosen to live in relative obscurity as a part-time hardware salesman and quail breeder.However, he has re-emerged in the limelight thanks to a documentary film about Switzerland's Holocaust-era bank accounts released this week. "I have enjoyed having a bit of quiet," Meili told Reuters before the premiere in Zurich. "I don't know exactly what will happen, but time heals."Meili revealed the documents in 1997 as Holocaust victims and their heirs had launched a series of lawsuits against Switzerland's secretive banks. These were seeking assets that relatives had stashed in Switzerland for safekeeping as the Nazis came to power in Germany and fascist Axis powers surrounded the neutral country.Swiss banks stonewalled, claiming there were few records remaining whereas subsequent searches by independent auditors found thousands, with some accounts depleted by years of fees and charges.Meili, whose watchman's job got him inside banks and insurers in Zurich, was aware of the reports and a Swiss government order to preserve bank records. On his rounds he saw documents destined for destruction, but acted only after seeing Steven Spielberg's movie about the industrialist Oskar Schindler who helped save Jewish factory workers in Nazi-occupied Poland.He remembers thinking: "I was like Schindler, in the same situation. You could do something. These people need you."That steeled him to smuggle out two ledgers from Union Bank of Switzerland, now UBS, in January 1997 and turn them over to a local Jewish organisation, which took them to the police.The resulting pandemonium rocketed the young husband and father into the public eye as scrutiny of Switzerland's wartime past intensified, especially its refugee policy that turned back thousands of Jews and its purchases of looted gold from Nazi Germany.At first portrayed as a hero, Meili later faced death threats as a traitor helping Jewish groups seek compensation from Swiss banks that ultimately agreed to settle U.S. lawsuits for $1.25 billion. Some Swiss saw it as blackmail.Thomas Borer, the Swiss diplomat who became point man in the crisis, also attended Thursday's film premiere. "Christoph Meili did the right thing when he discovered these documents and brought them to the authorities," Borer told Reuters."Afterwards, unfortunately, due to his young age and innocence and inexperience, he was seduced," said Borer, blaming Meili's lawyer and U.S. politicians eager to capitalise on the scandal.Meili described being promised $1 million for his help, but said that soon dwindled amid personal turmoil. Lawyers took their cut, he was divorced twice, his investments soured.Disillusioned with life in America where he became a citizen but never really took root, Meili returned home.A devout Christian, he is married again and works three days a month selling drills at a do-it-yourself shop. He blames lingering Swiss malice for keeping him from a better job."We achieved a lot for the victims, but we also saw a lot of politics," he said. "Lots of money, lots of politics."