‘We are all, in a sense, Jews by choice' 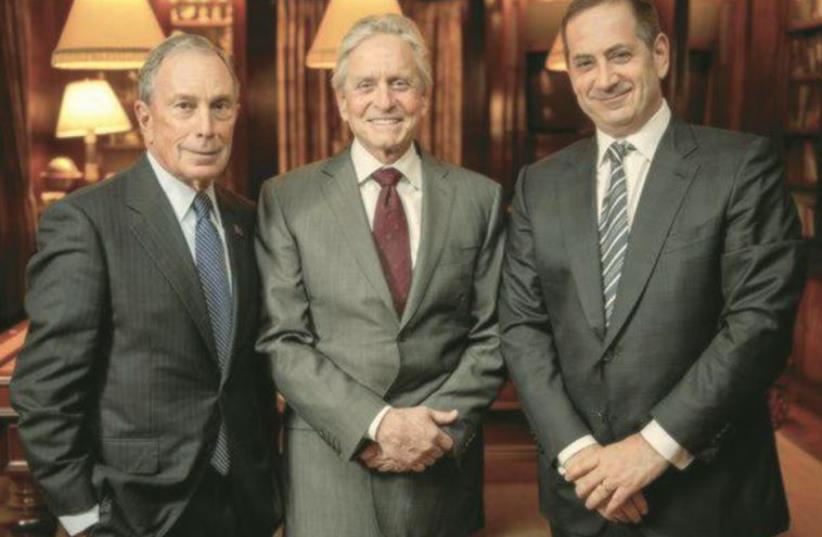 MICHAEL BLOOMBERG (left), Michael Douglas and Stan Polovets gather in New York City in January to celebrate the announcement of Douglas as the 2015 Genesis Prize laureate
(photo credit: GENESIS PRIZE FOUNDATION)
Advertisement
The diversity of the Jewish Diaspora should be celebrated and embraced, according to Stan Polovets, co-founder and chairman of the Genesis Prize Foundation.On Thursday evening, the foundation will hold its second annual award ceremony honoring Academy Award winner Michael Douglas for his support of intermarried families and fostering a more inclusive and tolerant Judaism. Douglas is the son of a Jewish father, legendary actor Kirk Douglas, and an Anglican mother, Diana.Douglas too married outside of the faith, with his wedding to actress Catherine Zeta-Jones, who is accompanying him on his current trip to Israel. Douglas’s unequivocal support for his teenage son Dylan’s dedication to his Jewish roots inspired the Genesis Prize selection committees. They also have a daughter named Carys.In a correspondence with The Jerusalem Post via email, Polovets weighed in on the significance of the award and how he hopes the hefty $1 million cash prize gifted to Douglas will encourage Jews of all stripes to be welcomed as members of the Tribe.

Last year, the Genesis Prize Foundation made a surprising choice when it selected Michael Bloomberg as its inaugural laureate. This year, the foundation made an even more surprising choice. Why Michael Douglas? Michael Douglas is an outstanding performer, an actor and producer of the highest caliber who is known and admired around the world.One of the key criteria of the prize is exceptional achievement, and Michael Douglas rightfully falls in this category, having received the highest honors in his field. He is also an activist in the field of social justice, which relates to another criterion, general contribution to humankind.Michael Douglas has embraced his Jewish identity later in life, an important part of his personal evolution and growth. We consider this expression to be particularly relevant, as he has lived with the challenge common to children of intermarried parents.Michael’s father is Jewish, his mother is not. Michael’s wife is not Jewish, yet he has freely chosen to be a Jew and the couple is raising their children as Jews.Today we are all, in a sense, “Jews by choice.” Living in a free and open world, we are able to make a personal choice: whether to embrace and connect with our Jewish self or set it aside and not pass this gift to our children.In this respect, Michael Douglas is a powerful example to many Jews worldwide who have been disconnected from their roots. This is at the core of our message: growing diversity in Jewish families is a fact; welcoming and encouraging inclusion of individuals regardless of their age, whether from a one- or two-parent Jewish family, is critical to our future as a Jewish people.

You have certainly chosen to address an important issue this year, inclusion of intermarried families. Can you explain more about the issue and why you chose it? The publication of the 2013 Pew Research Center’s study, “A Portrait of Jewish America,” highlighted the importance of this issue, and once again pushed Jewish organizations to consider the evolving Jewish identity in a world where more and more Jews are intermarried.In fact this issue is not unique to America; it is a global concern of Jewish communities. In that context, we want to encourage a “big tent” approach to welcome those who come from intermarried families. We would like to encourage Jewish organizations to be welcoming and inclusive to all who choose to identify as Jews. While some organizations have stepped forward in this space, we want to encourage many more to do so.The mission of the prize is to promote engagement of the least affiliated by highlighting the diverse profile of Jews of outstanding achievement. We want to show that there are many paths through which one comes to identify and connect as a Jew, and the fewer barriers we place in front of people, the more likely they are to engage.Michael Douglas shines a light on the importance of taking a path to create openness in our community; to welcome all those who wish to join, particularly those from non-traditional backgrounds. Among Jews who married since 2000 in the United States, 58 percent have a non-Jewish spouse (including those who identify as Orthodox), and the numbers in other parts of the world are higher – we can’t ignore this reality.Those who do not feel welcome will stop identifying as Jews.We know that not everyone will agree with the approach we are taking, but we feel this is a conversation that is important to men and women from all streams of Judaism who care about the future of the Jewish people.Douglas has indicated that he will re-gift his $1 million award toward promoting activities designed to raise awareness of inclusiveness and diversity in Judaism. Are there any details regarding his intentions? When do you expect him to make an announcement about this?The year-long program for the investment of the $1 million award will be announced at the time of the Genesis Prize award ceremony. The prime minister will present the award on June 18, so stay tuned for the announcement this week. We will subsequently work with Michael Douglas to elevate the issue he has chosen to address.Has your vision of the Genesis Prize evolved from its inception? What kind of laureates can we expect in the future? The vision of the prize has not changed. As we go forward, we always expect to create an element of surprise in the choice of the next laureate. We are going to emphasize that a disruptive approach can bring new, creative ideas to the surface.As innovators, we have to be prepared to take risks and think outside of the usual approach if we are going to maximize visibility and engage the unaffiliated.