Berman said her graduation day had been “engulfed in hospitality, excitement and good wishes – hundreds of emails and Facebook messages.” 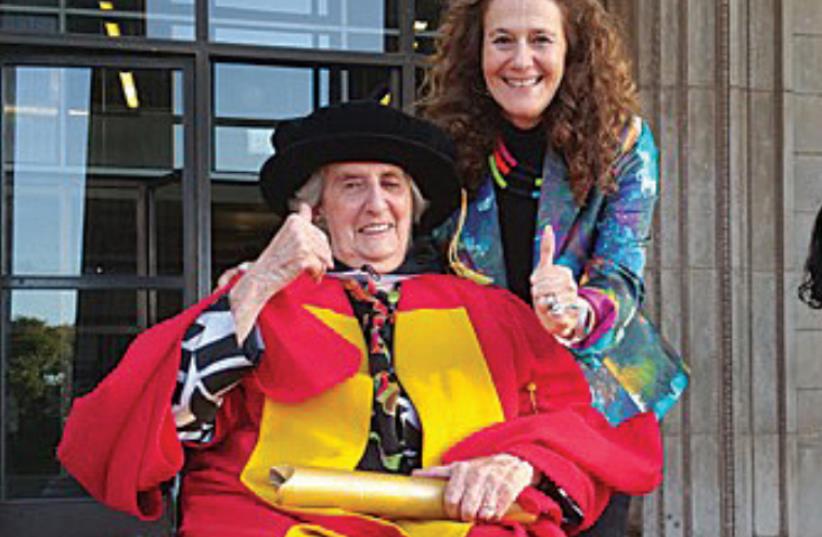 ESMÉ BERMAN celebrates receiving her honorary doctorate on the steps of the University of the Witwatersrand with her daughter, Kathy, on March 30.
(photo credit: Courtesy)
Advertisement
For Esmé Berman, a renowned Jewish South African art historian, March 30, 2016 was “the climactic moment” of her long career. It was on that day that Johannesburg’s University of the Witwatersrand (Wits) presented her with a Doctor of Literature degree (honoris causa) in recognition of her contribution to South African art.“I was honored by the rare – and unexpected – presence of the chancellor to confer my degree: the Honorable Dikgang Moseneke, the deputy chief justice of South Africa presiding in the highest court in our democracy, the Constitutional Court,” Berman told The Jerusalem Post in an interview last week. “A hero in South Africa, the learned Moseneke was a contemporary of Mandela and served time on the infamous Robben Island as a political prisoner.“As I am immobilized by Parkinson’s disease, following the citation I was wheeled across the stage to be handed my scroll by the chancellor and capped by the head of convocation. I was grandly ensconced in a scarlet and gold gown, capped with a black, velvet-tasseled tudor bonnet!” Berman, a distinguished writer, broadcaster, lecturer and consultant in South African art history who was born in South Africa in 1929, studied art at Wits and Trinity College in London.She was cited by Wits as being the first art historian to produce a comprehensive reference work of South African fine artists, Art and Artists of South Africa (published in 1970 and revised in 1983), a bestseller now in its fourth edition. The work has been a standard reference source for the past four decades and was the first of a series of encyclopedic works on South African artists authored by Berman.Together with Wits Prof. Karel Nel, she recently reintroduced the art of Alexis Preller in a deluxe, two-volume publication – a biography and annotated catalogue – which she launched at a major exhibition of his work in Johannesburg. Both the exhibit and the books were “landmarks” in the reassessment of an important South African artist, the university said in a statement.“Berman’s engagement with this project further enhances her contribution to the history of art in this country and deserves the recognition of being awarded an honorary doctorate degree from the university,” it said.Berman, who since turning 80 has penned a further five monographs on South Africa’s top artists, said her graduation ceremony “was quite different in mood from the staid rituals that I recall – primarily in the enthusiastic spirit of Black South Africa, epitomized in the introductory item – a performance of traditional songs by the Wits choir – a lively, melodious group, in variegated contemporary African attire, which combined with the glowing silk gowns of the senior academics to present a splendid tableau assembled on the Great Hall stage. The mix of the South African anthem with the Latin anthem of my alma mater was indeed a deeply moving moment.”Berman said her graduation day had been “engulfed in hospitality, excitement and good wishes – hundreds of emails and Facebook messages.”“After the ceremony, we hosted a euphoric party at one of our premier commercial galleries, graciously offered to us as the venue by owner Monna Mokoena, whose stable includes some of the most significant contemporary black South African artists exhibited at the most prestigious museums and galleries in the world,” she said.A mother of three and grandmother of two who lives in Johannesburg, Berman remembered the first pinnacle of her professional life, on November 20, 1970, when she first saw dozens of copies of her new book, Art and Artists of South Africa, in the window of the popular bookshop City Books in Johannesburg.“That sight eclipsed even the thrill of watching the same book scale the bestseller list repeatedly until the edition sold out two weeks before Christmas,” she said.“I could mention many moments of exceptional gratification during the past 66 years of active involvement in the art world – 16 of them in Los Angeles, and many of them associated with my activities as a speaker,” she added. “It was only quite recently, on glimpsing the row of heavy tomes that stretched across one of my library shelves – all of them by Esmé Berman – that it struck me that I could identify myself as an author.“It is as such that I am the subject of ‘Public Encounter – the life and work of Esmé Berman,’ due for release later this year. A collection of analytic and narrative essays by South Africa’s academic heavyweights, it is a book dedicated to my contribution to South African art history – annotated with vivid photographs spanning my career – and that of the South African art world across the 20th century. That publication would probably have headed my list of highlights before March this year, when I received the utterly unexpected but unequaled accolade from my alma mater.”