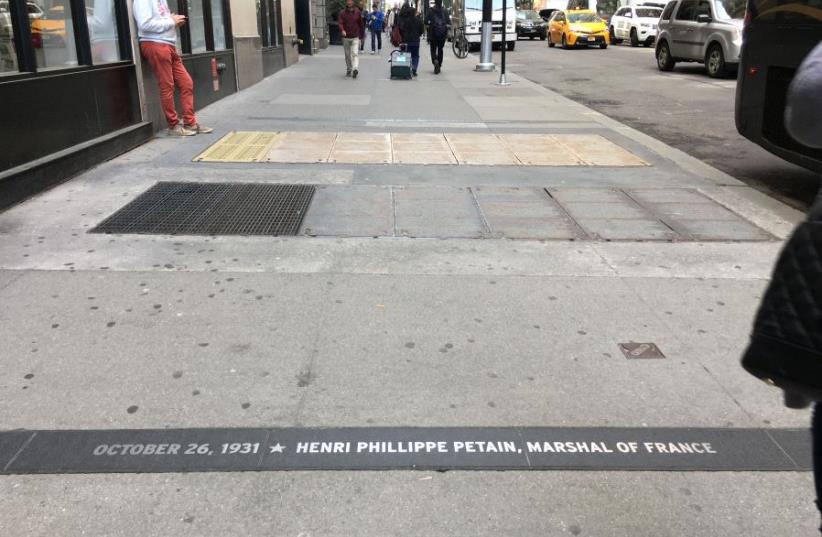 The name French Nazi collaborator Henri Philippe Pétain is engraved in New York City's "Canyon of Heroes" on Broadway, alongside those of historical figures such as Churchill, De Gaulle and Ben Gurion
(photo credit: DANIELLE ZIRI)
Advertisement
NEW YORK – Jewish officials and groups are calling for the removal of a New York City street plaque in memory of French Nazi collaborator Henri Philippe Petain that was brought to the public’s attention in a Jerusalem Post report on Thursday.A few blocks south of Wall Street, in the heart of Manhattan’s financial district, passersby may have noticed a plaque extended over the wide sidewalk, on which is engraved the name of the late marshal of France and chief of state of Vichy France, Henri Philippe Petain, the sound of which brings up painful associations for Jews worldwide.The long and narrow plaque, just north of Morris Street, is part of a collection of similar ones placed along a stretch of some 13 blocks on Broadway known as the “Canyon of Heroes.” The granite strips carry the names of all figures who have been honored in New York City with ticker-tape parades, a tradition dating back to 1886, in which a person’s achievements are celebrated with large amounts of shredded paper used much like confetti.The World Jewish Congress’s North America branch reacted to the report on Friday afternoon, saying the plaque must be removed.“Petain took the initiative very early on in World War II to collaborate with Nazi Germany, willingly enacting mass arrests and deportations of French Jews to deliver them to their deaths,” said Betty Ehrenberg, executive director of WJC North America. “Because of Petain’s active role in carrying out the aims of the Holocaust, the plaque in Lower Manhattan bearing his name should be removed from the roster of true heroes.”State Assemblyman Dov Hikind, who expressed his outrage over the sign on Thursday, sent a letter to Mayor Bill De Blasio on Friday demanding that the sign be removed.“It has come to my attention that New York City has inadvertently honored a mass murderer,” Hikind wrote. “Following the discovery of this marker in a recent article in The Jerusalem Post, I have been inundated with calls from not only my constituents but people all over New York City who are outraged – as I am – over Petain’s inclusion in the august collection of markers.” 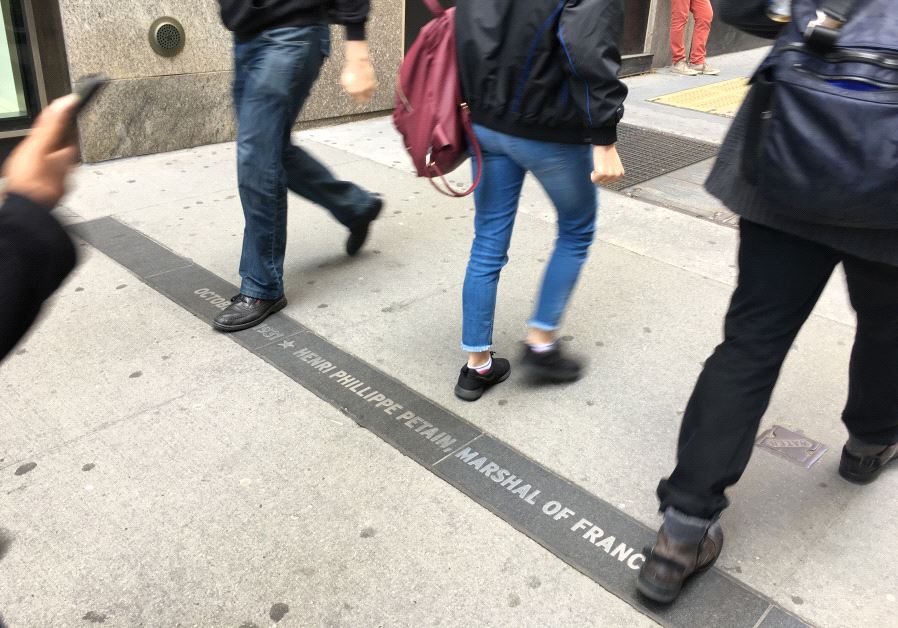 Petain was celebrated with a parade on October 26, 1931, for his role in the defense of his country during the First World War, particularly during the Battle of Verdun.But nine years later, in 1940, he became the leader of France’s Nazi-collaborationist Vichy government, ordering the roundup of more than 10,000 Jews, handed over to Hitler’s regime.Many streets in France had been named in honor of Petain throughout the years, but all were renamed by 2013.Last month, far-right French presidential candidate Marine Le Pen spoke of Petain’s actions and suggested France was not responsible for sending Jews to their deaths in 1942, known as the Vel d’Hiv roundup.The candidate’s comments caused much controversy, especially at a time when she has made assiduous efforts to rehabilitate her National Front party’s reputation and distance herself from her father Jean-Marie Le Pen’s antisemitism.“You cannot compromise with this kind of people whether it is Marshal Petain or Le Pen,” Hikind said. “I don’t think there is any question that this needs to be removed and I hope the city will do the right thing.”The Post has reached out to city hall for a reaction to the initial report, but has yet to receive a response.