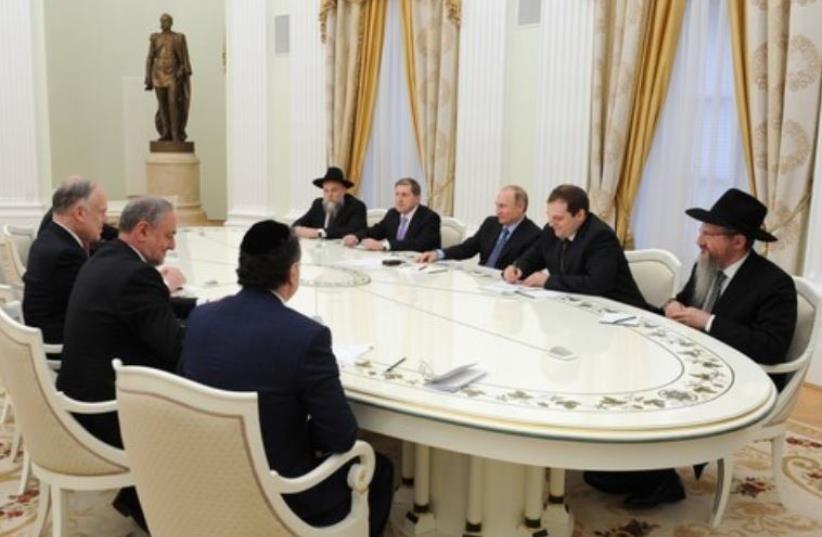 A delegation of the World Jewish Congress (WJC) and the Russian Jewish Congress (RJC), led by WJC President Ronald S. Lauder, was received on Tuesday at the Kremlin by Russian President Vladimir Putin
(photo credit: KREMLIN PRESS SERVICE)
Advertisement
A delegation of the World Jewish Congress (WJC) and the Russian Jewish Congress (RJC), led by WJC President Ronald S. Lauder, met with Russian President Vladimir Putin at the Kremlin on Tuesday to discuss Jewish life in Russia, and the country's continued positive relations with Israel. Over the course of a 90-minute conversation, the two discussed many issues pertaining to the Middle East, with Lauder praising the  positive between Israel and Russia. Lauder called on the Russian leader to show more support for Israel in international bodies such as the United Nations. Lauder told Putin that the Jewish people are very grateful for the good relationship between Russia and the State of Israel, and called on him to translate this alliance into more international support in organizations like the United Nations Human Rights Council.The WJC president also stressed that Iran's continued support of militant groups posed a serious threat both to Israel and to Jewish communities worldwide. "The World Jewish Congress is a very well-known and influential international non-governmental organization. As far as I know, the organization has existed for 80 years now and you do a lot to provide religious and secular support to Jews all around the world," said Putin, praising the World Jewish Congress' commitment to helping Jews across the world.Putin, praised the contribution of Russian Jewish organizations to the country's public life, saying: "As you know, we here in Russia have very close and regular contacts with not only Russian Jewish organizations, but European ones too. Russia’s Jewish organizations make a big contribution to our internal stabilization, and we are very grateful to our friends for this," "Judaism is one of Russia’s four traditional religions and, like the other traditional religions, receives constant support from the authorities," Putin highlighted, adding his well wishes before the Passover holiday.Lauder commended Putin for fighting anti-Semitism in Russia and praised the country for ensuring that its Jews continue to live an active and peaceful life. Jews have been part of the social fabric of Russia for more than 1,300 years, Lauder said, and have contributed to all areas of life – culture, science, academia and others.In addition to Lauder, the delegates present at the meeting in the Kremlin included World Jewish Congress CEO Robert Singer, Euro-Asian Jewish Congress President Julius Meinl, Russian Jewish Congress President Yuri Kanner, and WJC/RJC Vice-President Mikhail Mirilashvili.WJC CEO Singer called the meeting "outstanding," saying that the organizational structure was put into place for future ongoing contact between the Russian government and the World Jewish Congress. "Russian Jewry has always had a significant role in international Jewish organizations, and the World Jewish Congress is no exception to that. We look forward to many more years of positive Jewish life in Russia and to maintaining good relations with its government,” said Singer.