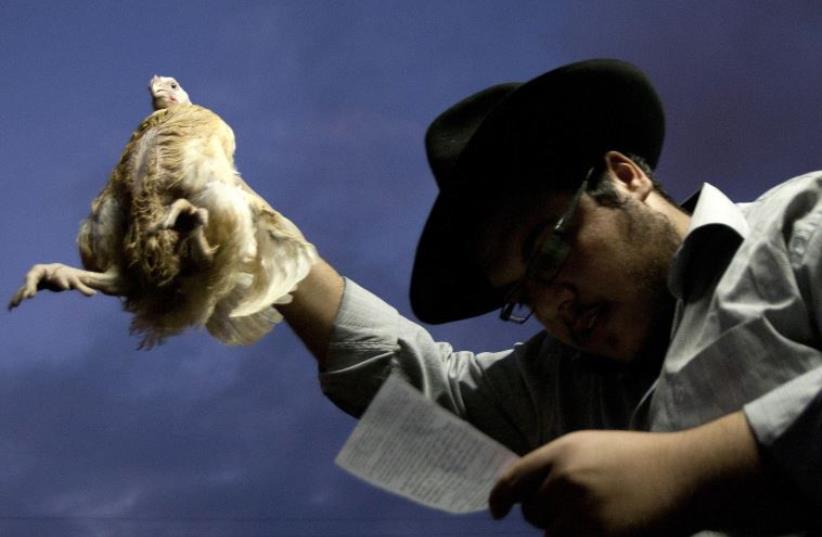 An Ultra-Orthodox man holds a chicken as he performs the Kapparot ritual ahead of Yom Kippur [Illustrative]
(photo credit: REUTERS)
Advertisement
Kapparot, the pre-Yom Kippur folk custom of swinging a chicken around one’s head as a way of purging sin, is one of those Jewish practices that doesn’t always, ahem, dovetail with 21st-century mores.The ritual has often encountered clucks of disapproval, and this High Holiday season is no different. In the United States this year kapparot has been the subject of at least two lawsuits: an anti-kapparot suit filed by animal-rights activists in New York City and a pro-kapparot suit filed by a suburban Detroit Chabad congregation encountering red tape.The New York suit was a victory for the chicken-swingers, with New York State Supreme Court Justice Debra James ruling last week that there was not enough evidence to prove that kapparot is a public nuisance. The Alliance to End Chickens as Kaporos filed the suit in July, accusing New York City’s police and health departments of assisting the ritual by blocking off streets and sidewalks, while not enforcing city and state laws that regulate health and animal cruelty issues.Days after the ruling, an activist behind the failed suit, Rina Deych, irritated a young Hasidic kapparot practitioner enough to get him to “flip her the bird” — though he held firmly onto the chicken.In suburban Detroit, Congregation Bais Chabad of Farmington Hills — which said its kapparot ritual is its best-attended and “financially, the single most important” event filed a suit against Tom Vilsack, secretary of the United States Department of Agriculture, The Detroit News reported Monday.Because the slaughterhouse normally used was unavailable, and because there are no kosher slaughter facilities in Michigan, the congregation arranged for a halal butcher to slaughter the fowl used in the ritual. (The chickens are supposed to be ritually slaughtered and then donated to the poor.) But according to the complaint, the USDA objected to the arrangement “on the basis of USDA requirements that any kosher slaughter facility be certified and inspected,” a process that would take months.Claiming the USDA’s actions represent “unconstitutional interference with religious practice,” the congregation went to court Monday seeking an emergency motion for injunctive relief.With the verdict not yet reported as of Monday evening, and Yom Kippur starting Tuesday evening, it’s unclear just what will become of the Michigan chickens after they are swung.But, barring the intervention of an animal-rights group, we’re guessing they’ll be someone’s dinner pretty soon.